The Bell at Sealey Head

My ninth, and certainly my final, book for Carl's Once Upon a Time VII challenge is The Bell at Sealey Head by Patricia McKillip. 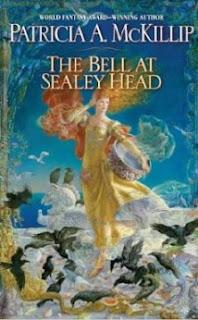 A bell rings in Sealey Head, at sundown, every night of the year. The people all hear it but they don't know where it comes from. Some think it's a ship's bell, a ship that was lost hundreds of years ago perhaps, ringing deep under the sea. But strangely no one has ever actually tried to find out the real source of the sound.

Judd Cauley runs an inn on the cliffs, overlooking the ocean. The inn is rundown, hardly anyone ever comes to stay, so Judd and his blind father are rather down on their luck. And then a mysterious visitor arrives, one Ridley Dow. He soon makes it clear to Judd that he thinks the bell ringing is somehow magical, nothing to do with ships lost at sea.

In another part of town an old woman lies dying. Aislinn house is the 'big house' of the town and the old lady is wealthy. Her heir must be called for and thus Miranda Beryl arrives in the town with an entourage so large they can't all be accommodated at the house. Instead they will stay at Judd's inn, the inn's fortunes are on the up at last.

Aislinn house itself it a pretty odd place. Emma, a housemaid, sees things there. She opens doors and sees Ysabo, a young woman clearly from a another time, whose whole life is bound up with ritual... certain tasks which have to be performed at precise times of the day or else... But Ysabo doesn't know what 'or else' might entail: she badly wants to know, but questions are not allowed. The newcomer to the inn, Ridley Dow, is strangely interested in the goings on at Aislinn house. Again, he thinks magic is somehow involved. It's all deeply mysterious and Ridley's comings and goings and weird theories end up involving Judd, his friend, Gwyneth, and her friends the Sproule siblings. When Ridley suddenly disappears it's up to them to solve the mystery of the bell at Sealey Head.

Well, this is the first book I've read by author, Patricia McKillip. I'd heard of her of course, anyone who reads a lot of fantasy books, probably has, but her books seem to stay on the other side of the Atlantic. It's rare to see anything by her in a UK bookshop, and in the whole of Devon, no library has even one of her books: I think that's rather a shame.

A shame because this book with its mix of historical 'real life' and a magical 'other world' was quite unlike any fantasy book I've ever read. Hard to put my finger on why because really I don't think this plotline is unique. It doesn't feel unique and yet I felt I was reading something very different. Perhaps it was the writing. It was at times quite sparse, especially with the dialogue, and then at other times it wasn't. Sometimes I had to reread lines to get their correct meaning. That should have been to its detriment but in fact it felt just the opposite. The writing was actually quite lyrical and I wanted to know what the author had actually said and meant so I reread quite often. I suppose in a way this kind of writing suited the storyline to a tee. A book full of magic needs a sort of imprecise, lyrical form of writing. Almost poetic really.

This might have been my first book by Patricia McKillip but I don't think it'll be my last. I'm normally not great on this kind of thing, retold fairy stories are not really for me for instance, though this is 'not quite' that either. It's 'not quite' a lot of things but it worked for me with its coastal, 'ocean' setting, it's historical background, a bit of magic and a touch of romance thrown in. A very fitting end to this years Once Upon a Time challenge.

the only books I've read by Patricia McKillip was "eons" ago called The Riddle Master of Hed series... oh wait! I did read one other The Forgotten BEasts of Eld. They were eventually made into a tv movie. I hope you get to find more by McKillip . She has lots of books out and Other than the Riddlemaster Trilogy I wonder if others belong in a "series"? Oh well.. I am glad you enjoyed this book..happy that it made it across the pond! If only the mail service would allow us to afford to ship books I am sure MORE would find their way there!

It is a shame it's so hard to get hold of McKillip's books here in the UK as I keep seeing good things about her everywhere on blogs. My library is a bit better than yours, I've been able to get hold of Winterrose, which I'll be reading in the next few weeks.

Whilst this isn't a book for me, I just had to stop by to say what a fantastic review you have written about it. It was so eloquent that you nearly convinced me that I needed to read it for myself!

Some of the McKillip books are not too badly priced on Amazon.co.uk, but I guess that the cost of postage can make them quite expensive overall. I hope that you manage to source some of them very soon, as you so obviously enjoy her style of writing.

If you ever need a short read with many of the same elements as this one, try McKillip's The Changeling Sea if you can get a hold of it. It's my favourite of her books, though I adore the Riddle-Master trilogy, too.

Loved the review, glad you liked the book so much!

I've never heard of this author, but magic, mystery, and romance sounds like a fun summer read.

Pat: The Forgotten Beasts of Eld is the famous one I think... I suppose if it was made into a TV movie that would bear that out. But really she isn't well known over here. I probably only know her because I've read about her in the blogging world.

Sam: I keep seeing good things about her too, presumably we both read a lot of American and Canadian blogs. LOL. I'll look out for your review of Winterrose if you do one.

Yvonne: Thanks for your kind words. To be honest, I suspect this would be a fantasy book you could read and enjoy. Others I wouldn't recommend but this is a very gentle story, beautifully told.

I think I must have bought this on Amazon but am not sure. It's possible I found it in Waterstones as they are now starting to stock a few North American authors.

Kiirtsin: Thanks so much for the rec. I was wondering which of her other books were similar and might be good to read. I will also make a note of the Riddle-Master series as Pat also mentioned that.

Deb: The book is exactly that, a really gentle summer read.

Well done with the Once Upon a Time challenge, Cath! This book definitely appeals to me.

My library service has just one by McKillip - Ombria in Shadow in the Junior Section.

Going back to your previous post, my library has no copies at all of books by Craig Johnson - so you're doing well in finding 'hard to get' books, at least as far as the library service is involved!

forgot to unscrew my head.. it's the Riddlemaster of Hed trilogy that was made into a tv movie ..don't mind me when I comment too early in the morning! lol

Thanks, Margaret! It was a thoroughly satisfying last book for the challenge. It seems most library services have either just one book by her, or none!

My library also has no books by Craig Johnson, the ones I've read I bought. The later books are quite dear on Amazon (£9 plus) so I'm getting them slightly cheaper on AM. None of them are on Kindle as yet. Another author who is strangely unknown in this country.

I am so glad you didn't hate this. When I saw your review I was a bit worried just because you had recently read about it at my blog. I have the same issue getting her books. Craziness that libraries don't appreciate her more! I hunt her out at second hand stores...

Kelly: Nooooo, I certainly didn't hate it. I liked it very much indeed. I'm surprised that you have the same issues in Canada with her books, I suppose I thought she would be more widely available there than here. How odd.