I've just finished my 8th. book for Carl's Once Upon a Time VII challenge so feel I am going great guns! It finishes in about 2 weeks so whether there will be a 9th. book, I'm not sure. Possibly. Anyway, my book 8 was The Iron Duke, a romantic steampunk novel by American author, Meljean Brook. 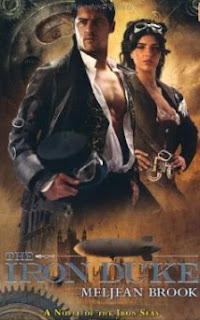 The background premise to this Victorian style steampunk fantasy is that Europe was invaded by The Horde, the *Mongol* horde... stupidly it took me a couple of chapters to realise this, I thought they were invaders from space. LOL! But that's just me being thick. Anyway, England was freed from tyranny by Rhys Trahaearn, The Iron Duke, a pirate turned merchant ship owner, and now a National Treasure. The rest of the world is still in chaos, apart from the USA where many of the British aristocracy fled from the danger. They have now returned and are known as 'bounders'. British society is made up of bounders and 'buggers' which is not some kind of derogatory, British swear-word term, but means they were infected with mechanical bugs by The Horde. (I did struggle with the term however...)

Mina Wentworth is a member of an aristocratic family that stayed, a police detective and a 'bugger', but she is also something else, her features resemble that of The Horde and although she has a good job she is reviled wherever she goes because of her Asian looks.

A dead body is dropped from an airship and lands on the doorstep of Rhys Trahaearne's mansion in London. Mina is called in to investigate and immediately attracts Rhys's romantic attentions. Which, despite the mutual attraction, is the last thing she needs. Her family are poor and the attention could rob Mina of her job, her only means of earning a wage to help keep the family afloat.

Eventually Mina finds out who the murdered man was (his face was ruined in the fall): he was the captain of one of Rhys's ships that he has given to the Royal Navy. The ship must be in trouble and an added problem is that Mina's fourteen year old brother, Andrew, is serving aboard her. Mina must do the reverse of what she wants to do and join forces with Rhys Trahaearne to find out where his ship is and what has happened to her brother. How can she do all of these things as a serving police officer and also manage to keep the enigmatic duke at bay?

Well this is a bit of a pot-boiler and no mistake. LOL. I sort of realised that when I saw the cover, but thought it might be a fun read for the OUaT VII challenge when I bought it in Waterstones a couple of months ago. I generally read 'serious' fantasy or purposely comedic authors such as Terry Pratchett for this challenge and just for once I thought it might be nice to have a complete change.

The first thing to say is that this is in no way a Young Adult book. There are many scenes of a sexual nature in the second half of the book that are not suitable for youngsters, in my view. Definitely adults only! At times I did not really like the hero, Rhys Trahaearne. He is overbearing and selfish, but then that's what this Harlequin/Mills and Boon style hero is supposed to be like. If you met someone like him in real life any sane woman would run a mile, but in a novel like this where we all know what to expect, it's fine... if you don't mind that kind of thing.

The thing that saved this book for me... (I say *saved* even though I didn't mind the romantic stuff at all) was the world building. I found this steampunk London quite fascinating with some excellent ideas worked into the plot. The idea of people infected with a 'bug' that mends them if they have an accident or fall ill is an interesting one. Many people who did not go to the US have this inside them and the book is quite intriguing on this aspect and how intolerance works within the framework of a society where some are 'normal' with no implants and some are 'buggers'. For Mina of course it's even worse as her conception came about in a certain way, her looks prove this, and she is ostracised because of it. Although this book is a certain kind of romantic novel it does also have some important things to say and I liked that about it. Truthfully, the book has a lot more in it than I have room to recount, zombies in mainland Europe, metal sharks and krakens in the sea, a mysterious 'blacksmith' who's an expert on mechanics and so on. This world really is absolutely fascinating.

The Iron Duke is book one in the author's 'Iron Seas' series. There are four or five more books but a couple are novellas... plus they're not always about the same people. One of the novellas continues Rhys and Mina's story, the rest don't as far as I can see. I popped the novella onto my Kindle for the princely sum of £2 something, the other novels I will think about as the library only has one. The Iron Duke though was a good, fun read with interesting ideas and a fascinating world: I enjoyed it. But it's not for those who have a low tolerance of Harlequin style romance books and the heroes that inevitably accompany them. You've been warned! LOL.

I haven't been able to get into steam punk ..but it looks as though you have!! I am glad it was "saved" ..as long as there is something in it to make you glad you read it!

It was strange reading experience, Pat. Bits of it made me roll my eyes and other bits made me think, 'Wow!' I don't know when I was last so conflicted about a book, but I think I can honestly say I did like most of it quite a lot.

Oh dear, I love steampunk and hate bodice rippers in equal measure. I think I'll decide this one's not for me and stick to China Mieville!

Geranium Cat: Oh dear, I don't think this would be for you then. Definitely not. I'll be honest, I've yet to find the perfect steampunk author for me. Perhaps I should try China Mieville.

Steam punk is new to me. Not sure i would like to read it. I'm not a fantasy fan. I do like the art work for steam punk though. I guess I should broaden my horizons and try a book like this. Great review Cath!

Peggy Ann: You're right the artwork for steampunk can be amazing to look at. I'm interested in the genre but wish I could find an author I really *love*.

I have been thinking I'd like to try this one (fan of steampunk, sometimes a fan of steamy romance when I'm in the right mood), but I think I would have a terrible time getting over the "buggers" bit -- even typing it is hard for me! This was considered a very off-limits swear in my family growing up and I am not sure how I'd handle it in an entire book... that said, the premise sounds really interesting and you make the world sound absolutely fascinating.

Kiirstin: The 'buggers' grated on me every time I read it, and that was a lot. And I'm not really that bothered by the swearword, used in context. But like this it felt all wrong somehow. But, regardless, the book was a fun read with a fascinating world as a background.