Back in May, for my birthday in fact, we had a couple of days away in the Midlands, staying at Hagley which is west of Birmingham and not far from Kidderminster and Bridgnorth in Shropshire. The idea was to spend my birthday actually in Birmingham at the city museum as they have a good collection of Pre-Raphaelite paintings which I was eager to see. In the event I went down with a rotten cold and wasn't up to facing the busy city so we had a day out in the countryside instead, visiting Bridgnorth and a National Trust property - one of those hidden gems nobody much knows about - Wightwick Manor.

The National Trust website is here and worth a quick look as it has a small slide-show of shots of the house, including a couple of the interior. No photos were allowed inside, as some of the contents do not belong to the NT apparently. Which is a shame as the interior is all arts and crafts period and full of Pre-Raphaelite paintings... so I didn't miss out on my paintings after all. The house, which used to be own by the Manders family who were paint manufacturers, is late Victorian and so beautiful from the outside that I thought I would share a few pics with anyone who is interested. 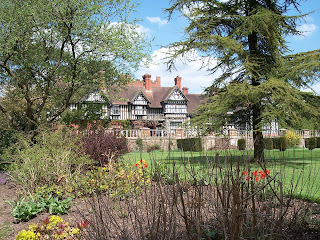 A distance shot from the garden... click on it for a bigger, better view. 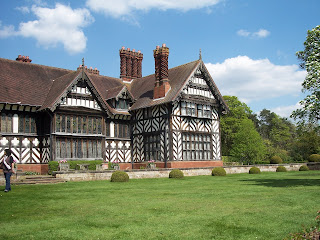 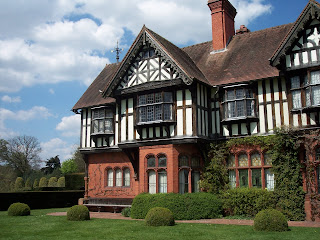 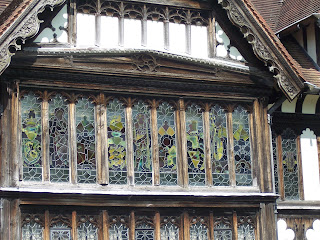 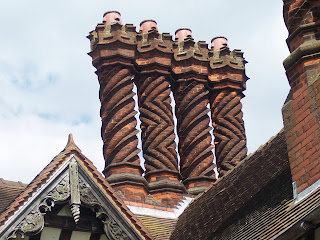 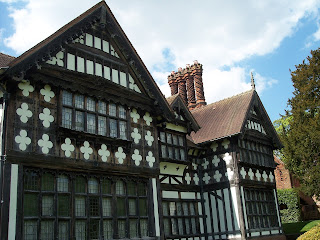 Around the side of the house. 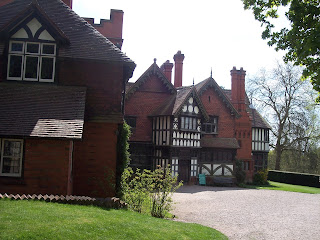 Around the back and where, as a visitor to the house, you enter the property. A guide takes you around the first bit, telling you the history of the house and about the paintings, which were stunning. You then tour the rest of the house, that which is open to the public anyway, on your own. The house has a cosy, initmate feel to it. Due in part to all the oak panelling I suspect, but also it's full of fascinating items and has a really friendly feel to it. I would also add how friendly the NT staff are there. 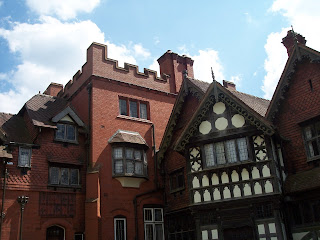 Another shot from by the entrance. 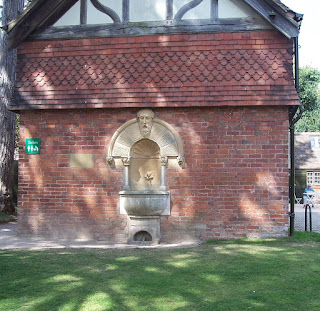 National Trust properties very often have posh loos but these are some of the poshest I've ever come across! 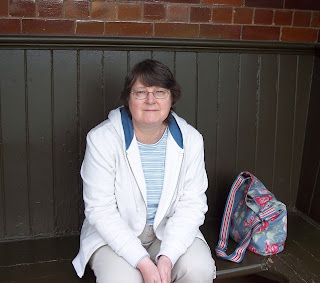 And here's me, on my 60th. birthday (trying not to think about that...) with my favourite bag and hopefully it's hard to tell how completely grotty I was feeling. LOL!

I actually felt that I may have enjoyed visiting Wightwick Manor on my birthday more than I would have going into the city. It was a lovely day, Bridgnorth was such a pretty town (pics of there in a few days) and Wightwick Manor was stunning - I wouldn't have missed it for the world. I must add that the pics are not as good as they might have been if I'd had the energy to walk around a bit more to get better shots. And we never did see much of the garden. Never mind... two good reasons to go back someday!

wow how gorgeous! (that includes my sis who is trying so hard to catch up to me..!lol)

I love the first photo showing the garden in the foreground! They all are beautiful picture and you know how I love to see your pictures when you travel!

Thank you for posting them sis!!!!

Stunning, the architectural details are just gorgeous. And you look lovely as well Cath ;) Happy Birthday to you :D

Happy belated Birthday! Sorry to hear you were ill, but the photos are lovely and it sounds like you had a good time anyway. I would love to visit places like that. I imagine the interiors must be really stunning!

Belated happy birthday, Cath! And what a lovely place to spend it, even if you were feeling wretched. I do love Shropshire - a very underrated county, I think, with so many beautiful places to visit. And not far from Worcestershire, where I grew up!

I can't think of a better way to spend a birthday, even when one is feeling grotty (though you don't look it). Those stained glass windows look magnificent. I can imagine being inside with the sun streaming through.

Pat: Thanks... well at least I'm now in the same decade as you. lol!

Glad you enjoyed the pics, Sis, more to come this week hopefully.

Kelly: It was such a beautiful house, I really fell in love. Thanks for you kind words. :-)

Danielle: Thank you! Oh yes, to tell the truth, despite the sniffles, I really did have a super day.

Thanks, Simon! You're so right about Shropshire. We've holidayed there quite a few times now and it's like an undiscovered country.

Penny: I have to say it was a very special day. I love it when I discover places I didn't know existed.

Almost better thanks. And thank you for the birthday wishes.

I loved seeing you!! And such a wonderful place. Imagine spending all that time (and money) making such beautiful chimneys. I wish I could have walked alongside you.

Happy Birthday Cath! Looks like you had a wonderful day. I love the chimneys and the stained glass windows! Roaming around old houses is one of my favorite things!

Nan: I'm probably the least photogenic person in the world but my husband managed a half decent photo so I thought I'd add it to the rest. Yes, I don't think they make chimneys like that these days, only for millionaires maybe.

Peggy Ann: Thank you. I love roaming around old houses too.

I hate having my picture taken, I invariably either have my eyes closed, or have some kind of contorted grimace of expression.

Your photo looks good to me and I wish you, rather belatedly, a Very Happy 6oth! You do have a few years on me, but that dreaded day is looming ever closer for both myself and hubbie (our birthdays are one day apart and we are the same age!)

We have had NT membership for some years now and have just about exhausted every property and garden in the South West, between Cornwall and The Cotswolds and we were only saying the other day that we would have to start taking sme short breaks and travelling further afield.

You can always rely on the NT for a great day out!

Yvonne: I don't like having my photo taken either. I tend to think I look horrible. Thank you for your birthday wishes. Rest assured being 60 is not as terrible as it sounds. The worst thing is the bowel cancer test the NHS gifts you on your 60th. birthday. LOL. Still, it's a *good* thing (I kept telling myself...)

I do think that NT membership is a brilliant thing when you're away on a short break. You certainly can rely on their properties to be an excellent day out.

A belated happy birthday! Great pictures and I love the stain glass window and the chimney stack detail.

Thanks, Julie! The detail in the house was stunning. I don't think you could get that kind of workmanship these days without it costing an arm and a leg.

I am sorry I am so late with my comment. I love the photo of you! Happy birthday, Cath!!

I would have loved to been there too. It looks lovely. I'm always fascinated by the history of manors and the great houses, who lived there, how they lived. From the wealthy owners side, not from the servants side! It must have been a hard life to be a servant.

No worries, Susan, I understand completely.

I know you would have adored this place. Not least because of the Pre-raphaelite paintings there! My goodness they were wonderful. Absolutely one of my favourite NT ever.