One of the reading challenges I signed up for this year started yesterday and it's The My Kind of Mystery challenge which is being hosted by Carolyn at Riedel Fascination. It's one I'm particularly keen to participate in as I've chosen books that are not necessarily centred around the crime of murder but which are more about other types of crime or some kind of adventure. There may be a murder involved but it's not the centre of the action so to speak. Of course, this challenge is called 'MY' Kind of Mystery so it's really up to the person particpating what they choose to do, this is my way of separating it from The Vintage Crime challenge that I'm also doing this year. Anyway I'm looking forward greatly to doing this one, I met Carolyn on GoodReads as a matter of fact - it's amazing how many friendly and interesting people seem to hang out there. I can't recommend the place highly enough. Huge fun.

Anyway, my first book for this new challenge is The Talisman Ring by Georgette Heyer. I might also add that it qualifies as book four of my Mount TBR challenge being hosted by Bev at My Reader's Block. 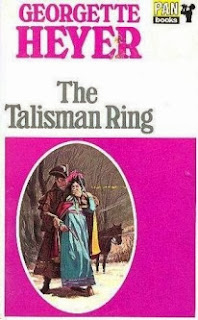 Eustacie is eighteen years old and a refugee from civil-war torn France. Her grandfather, Lord Sylvester Lavenham, rescued her when it became obvious that the French were sending all their aristocracy to the guillotine. Now Sylvester is dying and to assure his grand-daughter's future he's asked Lord Tristram Shield, his great-nephew but not his heir, to marry the girl. Tristram is thirty one, realises he needs a wife to continue his line and as he hasn't any better ideas, accepts his great-uncle's plan. Eustacie, being French and rather romantic, is not quite as enamoured of the idea, Trisram being her idea of a man who is not at all romantic.

She gets wind of a scandal regarding the heir to Sylvester's estate. The true heir is Ludovic Lavenham, her cousin and Sylvester's grandson. But he was suspected of murdering a neighbour in a row over a family heirloom, a talisman ring, and has skipped the country. The heir-apparent is a cousin of Tristram's, Basil Lavenham, a dandy known as The Beau. The ring that was fought over has gone missing and Eustacie is convinced that if it could be found, Ludovic's innocence could be established. She has yet to meet him, but that is all about to change when she runs away from home, to be a governess, and instead is captured by smugglers...

I can't think why I haven't read this book before. It may partly be because I've always adored Georgette Heyer's straightforward Regency romances and because this was a 'Georgian' romance mixed with a mystery I wasn't keen. I don't know. Whatever the reason this one has sat on my shelves for years unread. I'm tempted to say, 'What a criminal shame' and perhaps it is... but on the other hand sometimes a book is just perfect for a particular challenge or some other reason and the feeling is that you're actually quite glad you've not read it before because it has turned out to be just perfect for 'now'.

I always forget how much I love Georgette Heyer's writing. It is simply sublime and The Talisman Ring is a perfect example of her skill. Most of the action actually takes place in an inn and you might think that restrictive but not a bit of it. It's actually an intimate setting and we get to know the characters who are staying there very well indeed. From exitable and romantic Eustacie who has taken up Ludovic's cause, to Ludovic himself, to Sarah Thane and her affectionate brother, Sir Hugo, only interested in brandy and good food. All are beautifully written and all get embroiled in Eustacie's plans to clear her cousin's name. Lord Tristram is a reluctant accomplice at first but even he thaws under the influence of the the two women, Eustacie and Sarah, and his mad cousin, Ludovic.

It all sounds like a Georgian romp and that's indeed what it is. There's intrigue, night-time burglaries, smugglers, a mystery to be solved and goodness knows what else, all written tongue-in-cheek with a huge dollop of humour. Every character is beautifully written but my favourite by far is Sarah Thane who is brave, sensible, very astute and knows exactly how to handle Eustacie, her own one-track-minded brother, Hugh, and of course, Lord Tristram Shield.

The mystery itself, though seemingly complicated, is not that difficult to fathom and the culprit is fairly obvious. That did not matter a jot. The joy of this book is in the journey and as such I absolutely 'loved' it. From being an obscure book of Heyer's that I knew nothing about it's now one of my absolute favourites and definitely a contender for a regular reread like Sylvester and Frederica.

well, this one sounds like it was a total enjoyment to you! I love to hear of books like that..and of course love when they are books that "I" happen to read lol. you are off and running for February!!!!xoxo

I really need to read some Georgette Heyer!

Pat: It was pure delight from start to finish. I've been lucky just recently and had several fantastic books. And the book I'm reading at the moment, Have His Carcase by Dorothy Sayers, a 1930s British crime mystery, is also a 'can't put down'.

Kelly: She's absolutely one of my favourite authors so yes you do! LOL