Three more short reviews today. As the post title suggests they're a bit of a mixed bag... I like to ring the changes when I'm reading.

First up... Charlotte Fairlie by D.E. Stevenson is my book 8 for Peggy's Read Scotland 2014 reading challenge. (And how much am I enjoying this challenge? A lot!) 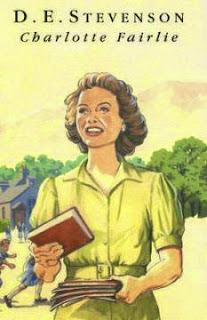 Charlotte Fairlie is the new, rather young, headmistress of a private girls' school. She's been doing the job for a year or two and loves it but her one regret is how lonely the position is. She can't be real friends with anyone or people will think she's playing favourites, or perhaps that person might be looking to curry favour with the headmistress. A new girl arrives at the school, Tessa MacRynne, whose home is the island of Targ off the coast of Scotland. Tessa seems fine until one evening Charlotte catches her running away. It materialises that her parents have split up and her American mother has gone back to America without first seeing Tessa. The girl, anxious for her father, wants to go home. A crisis is averted and Tessa stays, but Charlotte finds herself very drawn to this independant, charming girl. The following summer Charlotte accepts an invitation to visit Targ for a few weeks and there a whole new adventure begins...

After the angstiness of reading Sovereign by C.J. Sansom for a week, this was the perfect antidote. A really charming, gorgeous read. I loved it. It's a book of two halves. The first half takes part at the school and involes teachers, pupils, staff politics and so forth. I like books based in schools so this suited me fine. Very enjoyable. After that the story moves to Scotland and the perfectly gorgeous setting of a beautiful island and its inhabitants. This suited me fine too as the descriptions were delightful and so were the people. Charlotte is a delightful heroine, strong minded, independent, but with rather a sad background. She's a survivor who doesn't spend time bemoaning her lot but has made a new life for herself and is getting on with it. I liked the romantic aspect as well, it was clear how that would pan out right from the start but sometimes it's nice to have that kind of certainty when you're reading a story.

Another super book by D.E. Stevenson, probably my favourite so far. I'm hoping to find more but they're not *that* easy to find, sadly. Highly recommend this one though.

Next, The Rendezvous and other stories by Daphne du Maurier. This is my book 25 for Bev's Mount TBR 2014 challenge. 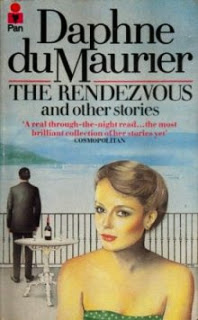 I always find it hard to review books of short stories, so I'll keep this brief. I've read quite a few of Daphne du Maurier's books but not many short stories, a few in other mixed anthologies I think... The Birds, that sort of thing. This volume has some excellent stories in it. I particularly enjoyed the first one, No Motive which is a very strong mystery about a wife and mother who commits suicide and no one can work out why. Her husband puts a private detective onto it and the resulting story is as good as any full length crime novel I've read. There are two very good ghost yarns, Escort a WW2 sea warfare story, and Split Second a domestic story about a lonely widow whose daughter is away at boarding school. Rather poignant. Other good stories include The Rendezvous, The Lover and La Sainte-Vierge all very human stories about love, lust, philandering, loss, loneliness: Daphne du Maurier wrote this kind of story very well indeed. In fact she wrote everything very well and this book of short stories is among the best anthologies I've read.

Lastly Sanctus by Simon Toyne. This is my book 9 for the My Kind of Mystery challenge which is being hosted by Riedel Fascination. 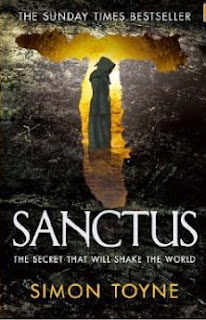 The place is the city of Ruin in Turkey, the home of a strange monastry built into a mountain. It's an extremely secretive order with a very dark secret - The Sacrament. But what is this 'Sacrament'? No one but the monks know and only a few of them are actually party to this secret. The world's media is suddenly focussed on this community when one of the monks, Samuel, climbs to the top of the cliff above the monastry and throws himself off. Liv Adamsen is the Samuel's sister. She's not seen or heard from him in eight years and is devastated to hear of his fate. She travels to Turkey to discover why he did this and immediately walks into a dangerous situation as someone attempts to kidnap her. It's clear her life is at stake as several factions fight over her. Liv has no idea why they want her or who she can trust. It's imperative that she discover the secret of the Sacrament but will she live long enough to achieve this aim?

I don't read many of these religious, mad monk, crazy conspiracy type yarns... possibly for a reason. My husband recommended Sanctus to me and as I occasionally like to humour him :-) I read it. It actually wasn't terrible. A bit Dan Brown 'Da Vinci Code' sort of thing and as I wasn't expecting too much, it was OK. It's a pageturner because you get kind of caught up in the mayhem and intrigue. There's lot of action and a certain kind of weapons talk that possibly appeals more to men than women, though not exclusively of course. The conclusion was about as unlikely as it's possible to get but didn't disappoint in its craziness: I like a bit of crazy from time to time. LOL. This is part one of a trilogy and I'm not sure if I'll pick book two up from the library or not. Life's a bit short etc. and I have so much else to read. We'll see.

I think you are going to beat your all time record for the amount of books read this year! While I will be at the bottom..I"ll just call this my "inch worm" year lol... it's always good when the books are enjoyed alot..it's sounding like you are ready for a trip to Scotland after all these books! lol

Pat: I think you're right about beating my all time record. I never thought I would *ever* read 100 books in a year but it looks like I actually might this year. 'Flabbergasted'!

Oh yes... the Scottish books are great preparation for the trip. And there will be photos...

I still haven't read an of D E Stevenson's books - I'll see if the library has any.

I read The Rendezvous a while ago and thought it was a brilliant collection of short stories. My favourites were The Rendezvous, Escort and Split Second - talk about a nightmare situation!

Short stories often leave me feeling dissatisfied, thinking they are lacking in substance or characterisation. Not so with this book, I think they all worked well!

I quite like Dan Brown's books - all that mad action, searching and danger - pure escapism for me so long as I can accept the impossibility of the plots, which I usually can, so Sanctus could be a book for me!

Margaret: D.E. Stevenson's books are worth a look. I've read three so far and all were charming.

Yes, I remembered you reading The Remdezvous and liking it a lot. I thought they mostly worked well too, I think there was just one I thought a bit average, the rest were excellent.

Sanctus is all mad action so I supect you might like it too. It's certainly rather well written.

I always love it when someone writes about DE Stevenson. I think she wrote about 33 novels but, as you say, aren't that easy to find these days. I was just spying my copy of Charlotte Fairlie last night wondering if I should read it now. After seeing your post I think I have my answer.

Thomas: I think I was quite lucky that my library actually had two books by her. I keep seeing reviews of titles that I fancy but no copies exist in any Devon libraries. I shall keep an eye out in charity shops and maybe treat myself to a few from Amazon at some stage. Hope you enjoy your reread!