I've been reading quite a lot of non-fiction this month, four in all. One I reviewed elsewhere and these are the other three. 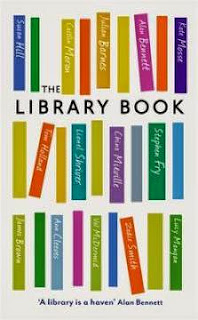 The Library Book is a book of essays by various celebrities and authors which deals with what libraries mean and have meant to them. Contributors include Alan Bennett, Julian Barnes, Val McDermid, comedian Hardeep Singh Kohli - recalling how he met his first Punk in a library when he was a boy - Kate Mosse, Ann Cleeves, Susan Hill and so on. Most are what they are today because of libraries they were taken to as a child. Others plead convincingly for governament cuts *not* to include libraries, because it's imperitve that the population should be educated and poor children have access to books that can change their lives. All of the essays were interesting, particulary Alan Bennett's long one on libraries throughout his life and Tom Holland's on the lost libraries of Babylon and Alexandria. There was also a library short story which was an extract from Un Lun Dun by China Mieville... I liked it so much I ordered the book from Amazon. All in all an excellent book of essays perfect for any biblioholic or library addict.

Next, Lorraine Kelly's Scotland by Lorriane Kelly, which is my book 9 for Peggy's Read Scotland 2014 challenge. 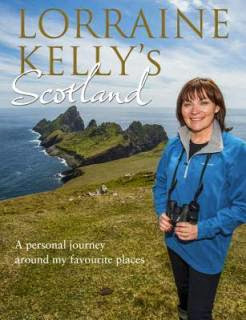 Lorraine Kelly is a television presenter for ITV, specialising mainly in Breakfast TV presenting. She's a native of Glasgow but lives - according to this book - in the city of Dundee, on the east coast of Scotland, with her family. In the course of doing her reporting job she's travelled all over Scotland and this book is the result of all those journeys, plus various family holidays. The book is divided into various sections, Edinburgh, Glasgow, Dundee, The Highlands, The Western Isles, Shetland etc. Beautiful photos, taken by her husband, Steve Smith, illustrate the volume, these are utterly stunning. Along with the photos is quite a lot of info about the towns or cities, islands, flora and fauna and so on. An expert on Scotland might find it a bit lacking in detail, but I'm not even close to an expert so I rather enjoyed the 'basic information' style of the thing. I especially enjoyed the island sections and the story of how she had long wanted to visit the almost inaccessible island of St. Kilda, failed a couple of times because of conditions, but finally managed it in 2013. One thing is very clear throughout the book and that is how much the author adores her home country. This is what some might call a 'coffee-table' book but is none the worse for that and I passed a very pleasant afternoon reading it.

Lastly, For the Time Being by Dirk Bogarde. 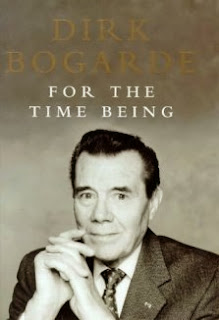 Dirk Bogarde is known as one of Britain's most well known film stars of the 1950s and 60s, specialising in lighter, frivolous kind of movies. In later years he went on to make more serious, artistic type films. I personally remember him in Doctor in the House, Doctor at Large and Doctor at Sea... which was my personal favourite. Later in life he became a writer. His autobiography stretched to many volumes and he wrote novels. He also wrote a column for The Daily Telegraph, mainly book reviews but also obits and essays on various subjects. These make up the content of For the Time Being. In the first half of the book we hear about his early childhood, his war experiences, his life in France and what happened when he returned to London after 20 years in that country. There's some gorgeous writing here. I particularly liked his reminiscences of life on the French Riviera. Not an area that ever really appealed to me but when Bogarde describes how you can get away from the tourist spots and up into the mountains, where life hasn't changed in centuries, you find yourself tranpsorted by his beautiful descriptions. He was also terribly affected by his war experiences, as were most who saw action in WW2 of course, and this comes over very strongly. The second half of the book consists of the book reviews he wrote for the paper. The books he reviewed were many and varied... a lot of biographies, quite a few literary books, some travelogues etc. I wasn't quite sure if he was given books to review or reviewed his own - the former I think as there were books about people such as Madonna, which he hated, so can't imagine he would have bought those. His reviews are honest, sometimes quite scathing, other times full of enthusiasm for what he thought was a wonderful book. I thoroughly enjoyed For the Time Being. Bogarde was a superb writer, particularly when recounting his own experiences or talking about places he loved or famous people he knew. You learn quite a lot about the man himself from this volume, warts and all, and I'd like to know more so will probably try to find some of his autobiographical works from the library.

As I'm a library addict I really must read The Library Book and Lorraine Kelly is such a lovely person, I'm sure her book is too. As for Dirk Bogarde you've reminded me I have his autobiography Great Meadow about his life as a boy in the 1930s - and I still haven't read it!

Margaret: The Library book was such a delightful read, as was the Lorraine Kelly book. The DB book you have is the one I fancy reading. There are about half a dozen volumes of his autobiography I fancy so I'm not sure about reading every single one...

A really interesting selection of books here. My mother had some Dirk Bogarde autobiographies and we both loved reading them. I can't recall which one detailed his long correspondence with the lady who had previously owned his house, but it was such a lovely friendship between two people who never actually met.

Jane: I like to ring the changes a bit with non-fiction. I'm pleased to hear the DB autobiographies are good. I've heard that the first one about his childhood is delightful so I must try to get hold of that. And the one you emntion also sounds very interesting indeed.