Some short stories for the R.I.P IX 'Short story weekend' today, which I haven't done so far but usually try to do at least a couple of times during the challenge.

A Coven of Vampires is a book of short stories by horror writer, Brian Lumley. It's my book four for Carl's R.I.P. IX challenge and also my book 32 for Bev's Mount TBR challenge. 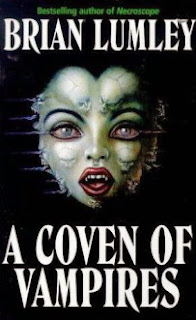 Perhaps I should apologise for the cover. I didn't think too much of it until my husband told me that the sight of it on the coffee table had been freaking him out all week. LOL!!!

Brian Lumley is an English author from the North East of the country, where some of his stories are actually set. I've been reading his books for many years now, probably since the late eighties or early nineties and it always surprises me that he's not more well-known than he actually is. I suspect he's most famous for his 'Necroscope' series of vampire books, none of which I've read right through. I believe I started one, couldn't get on with it and abandoned it. What I do love are his short stories and novellas. Some of those feature another of his creations, Titus Crow, a sort of psychic investigator... again I'm not mad about about those but have read a few and they're ok. Where I think the author excels is in his orginal horror short stories and those of a Lovecraftian 'Chthulu Mythos' theme. A Coven of Vampires concentrates on those two types of stories and was therefore right up my street.

Lumley's speciality, it seems to me, is weird tales. He doesn't do ghost stories, he does the kind of macabre tale that chills your blood. Although this volumes purports to be about vampires you won't find Dracula in a black cloak and fangs here. Instead we have other kinds of parasitic behaviour and some of it is very disturbing indeed.

In Uzzi a man is involved in a car accident, knocking over a female pedestrian. In her dying moments, the man, wracked with guilt, swears to 'look after Uzzi' thinking this must be a much loved pet. It's not. When he senses that something terrible is sharing his bed with him at night he wonders if he's losing his mind.

The Picnickers is one of my favourites in the book. A young boy is staying with his uncle in a seaside village in the North East of England. The village is a pit village and as his uncle is a local doctor, the boy is quite used to tragedy in the form of mining disasters. One such happens and a man dies, swiftly followed by the suicide of his wife. This coincides with the arrival of a family of gypsies whom the boy comes across in the woods. They frighten him with their silence and strange eyes. Ther dead wife wants to be buried with her husband and things come to a head when the coffin of the recently buried miner is found riddled with holes: something has burrowed into it. But how? And why? I liked the use of the boy as the narrator in this and the way in which he sets out to watch the adults and solve a very odd mystery. Good writing and a terrific story, in tone it reminded me of Neil Gaiman's, The Ocean at the End of the Lane.

Several Chthulu stories are really rather good - The House of the Temple for instance. A man inherits a house in Scotland, from his uncle, with the proviso that he can only inherit all of his uncle's money if he destroys the house completely within three months. He goes to live in the house with an artist friend, to try and discover what secrets about the house and adjoining deep pond his uncle had unearthed. The Thing from the Blasted Heath is also very good, retelling as it does the story of how a man plants a strange tree in his garden. It's come from a place where a meteor hit some heathland and where nothing will now grow. The tree scares a neighbour with its unearthly glow at night and the owner must try to find out what's going on. Very creepy.

Zack Phalanx is Vlad the Impaler! is a bit of a spoof story involving the filming of a movie about Vlad the Impaler in the Carpathian Mountains. The main star doesn't show up for filming which causes mayhem. They use villagers for extras but they're spooked by something and one night disappear altogether. Bit of a crazy ending this one has but is quite good.

What Dark God? is set on a British Rail train in the mid 1970s. (I can quite see why that might spawn a horror story...) It involves two chaps sharing a carriage with some very stange people indeed. The ending of this one really chills the blood.

All in all a good anthology of creepy stories. Only a couple I felt were a bit average (not 'bad') so out of thirteen that's pretty good; and four or five I thought were actually terrific. Brian Lumley writes very well indeed, in my opinion, sucking the reader into some very strange situations and making you believe they're not that unlikely at all! Reading this has made me want to read more Brian Lumley for RIP. I really like his Chthulu novellas and although I've read several there are just as many I've not read so I'll be looking those out next month.

You are doing so much better than I am!

Vampires are not my'thing', nor horror, but maybe I could manage a short story or two. I'll see if the library has any of Brian Lumley's books, seeing as he is from up here!

I am with Margaret on not liking short stories... but it does sound like you enjoyed them and that's what counts!

I finished another Scarpetta book but with my computer down I can't post about it..I will as soon as I can! lol at least that makes 4 books for rip...

Margaret: Yes, Lumley is from the North East and some of the stories very much have a flavour of the area, especially the coast.

Pat: Really sorry to hear about your computer, hope you get it back soon so you can catch up with your book reviews. Four books is great and it's not even October yet. lol

LOL, Val! You're right though, I wouldn't recommend these to everyone.