My reading has slowed down considerably this month and this is down to two things... being a bit busier than usual with family and the garden... and doing several jig-saw puzzles. Here we are, halfway through the month, and I've only just finished reading my third book. Given my express-train approach to reading this year that's quite surprising... but not a problem. Sometimes there are other things to do and being *so* one-track minded is perhaps not a good thing anyway. And I do so enjoy time spent with my family and doing the odd jig-saw puzzle.

Anyway, onward. My second book for Carl's R.I.P.IX challenge is Silver Borne by Patricia Briggs. It is also my book 31 for Bev's Mount TBR challenge. 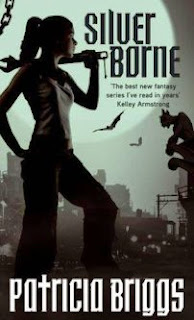 Mercy Thompson, a coyote shape-shifter, is the mate of Adam Hauptman, the Alpha of the local werewolf pack. Naturally it brings her all kinds of problems, some of her own making, some not. She shares a trailer with Samuel, another werewolf, not of the local pack, but whom she grew up with. Generally he's as solid as a rock but suddenly he goes into meltdown and Mercy has to try and help him not get killed by the Marrok (head of the American werewolves) or Adam and the local pack... a wolf with a breakdown being a very dangerous thing. A book Mercy was lent by a bookshop-owning member of the local fae is also giving her problems. A group of bounty hunters come looking for Adam but is that who they're really after? And what has the fae book got to do with this mess? Mercy needs to find answers quickly. Samuel's life is in danger, Adam and the pack are also but are not necessarily helping matters. But is the one in greatest danger actually Mercy herself?

It's been a little while since I read a Mercy Thompson book but it's one of my core series where the minute I start reading an instalment I slip back into the universe immediately. Admittedly, they are a trifle samey. Mercy's problems are always compounded by the fact that she never can, straightforwardly, ask for help in the normal way, has to keep secrets from the people she loves and ends up making herself look bad, even though the fault is often not completely hers. Luckily, her relationship with Adam is very strong and he always makes allowances. He's completely adorable to be honest and their relationship is one very real strength of this series of books.

I liked the fact that this book tells us more and more about The Fae who, for me, are one of the most intriguing aspects of this series. They're mysterious, secretive and dangerous and I like hearing about the different kinds of fae that exist in this universe.

Funnily enough I don't read heaps in the urban fantasy/horror genre. This is because I can't find many series that are worth my time to be honest. Sometimes I find the writing quality to be quite poor or I'm picky about the way American writers write English settings and language. But this is an American writer writing in an American setting and thus I have no complaints whatsoever: Patricia Briggs has it spot on with Mercy and I'm so happy that I still have a couple more of her books to read.

Next, my book three for Carl's R.I.P.IX is The Twenty-third Man by Gladys Mitchell. This also qualifies for Bev's Vintage Mystery Bingo challenge under the category of 'A book by an author you've read before'. 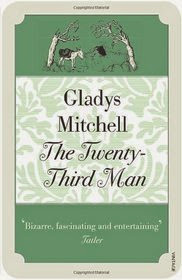 Dame Beatrice Bradley arrives on the island of Hombres Muertos in the Canary Islands, via a cruise ship. She's decided to stay for a few weeks and with her are a chap called Clun who has recently served time for manslaughter and a brother and sister who seem rather odd. The island is famous for a cave in the mountains where twenty-three mummies sit around a table. A young boy returns from a trip to the cave saying that he counted twenty-four mummies, not twenty-three. No one believes him but eventually the truth of his statement is revealed. The dead man is an English lothario type and it seems practically everyone at the hotel has a reason to want him dead. Naturally, Mrs. Bradley decides to investigate...

This is the second Mrs. Bradley book I've read, the first being Watson's Choice just a few weeks ago. That wasn't bad but this was actually quite a lot better. I think that's possibly because I enjoyed the Canary Islands setting so much. I suspect Gladys Mitchell knew the islands as her descriptions are vivid and gorgeous and would suit a travelogue. There are a lot of characters and I did find myself getting a trifle confused. That's probably just me as the older I get the harder I find it to remember a large group of characters. Regardless of that I found characterisation to be good and I particularly liked Clement, the eleven year old boy whose adopted parents were bringing him up with no discipline as an experiment. He reminded me a lot of Tony from Angela Thirkell's Barsetshire books and brought some nice humour to this story. An enjoyable book that just squeezes into the Golden Vintage Bingo guidelines of being published before 1960, this one being from 1957. I certainly plan to read more in this series.

You're doing OK, Cath! I've still been reading but not writing about the books - until this morning for one book. Oh maybe that would qualify for RIP - it's an Agatha Christie mystery?

I have read one book for RIP Testament of a Witch, but it will be while before I write about it as we're off to the Lake District for a few days tomorrow!! I hope the weather picks up. It was lovely here last week but we have mist and rain today!

I don't read much fantasy and I don't like horror at all. I like the sound of the Mercy Thompson book. But maybe I'd be better with a Gladys Mitchell one

I think your "so called" slow up will not hurt your yearly total lol. Thankfully these two don't sound like I "need" to put them on my wish list! I breath a sigh of relief when that happens lol!
I have about 220 more pages to read in my second Scarpetta book.. very easy reading I must say. that will be my 4th book for rip so I think I may take a break and read something different after this book then go back to rip...we'll see ..

I like the way you are able to combine the two challenges, and both books sound interesting. If the setting intrigues me, I often remember the book better. If the author can get me into place and atmosphere, whether or not I love the book, I'm so much better able to visualize events. The Canary Islands sound like a great location for a story.

Margaret: Thanks. Yes, mysteries are allowed for RIP. One of the three I've read is a mystery.

Very envious of your trip to The Lake District. Hope you're having a lovely time.

Pat: No, it'll still be a good reading year for me. I think I may hit 100 for the first time ever. Next year I want to read some of the chunky books on my tbr pile so the total will be less I expect.

You're doing great if you've already read 4 books for RIP!

Jenclair: Luckily, most challenge hosts don't mind if you double up with the books you read. It works well for me. I'm the same with settings. To be honest I think it's part of my love of armchair travelling. I've never before read anything set in the Canary islands.

I am glad for the recommendation for the Gladys Mitchell book. I know those are variable and I want to be sure and read some good ones.

Tracy: I've only read the two - thought the first was ok and liked the second. From that I deduce that yes, the series probably is quite variable.

Oooh! another Mitchell book that I've not heard of...way too many out there to catch up on...

Cath, I 'm so happy you liked Silver Borne! And that you read it so you can catch up in the series. I quite enjoyed Silver Borne, it was one of the better ones. Interesting that you have such different covers than we do here in North America. Wow.

I have two Gladys Mitchell mysteries I've managed to find over here, must give them a go at some point. Right now I have so many other mystery series to catch up in :-)

You are doing very well reading for all your mysteries and challenges, Cath. Some really good books you've read this year.

Susan: Most of the PB covers I own are your North American ones. I prefer them to be honest. I own a couple of ours because one was given to me and another I saw in Waterstones and couldn't resist buying it.

Thanks. I'm quite pleased at the way I've managed to focus on my challenges this year and get a lot of books read.