My reading's been really slow this month and has jumped around a bit in regards to subject, some fiction, some non-fiction etc. I think after storming through books all year I've become a bit jaded and am struggling to find books to catch my interest. I find when that happens it's best to go with the flow and do something else as my enthusiasm for books always returns fairly quickly. Anyway, two books today - A Short Walk in the Hindu Kush by Eric Newby and Clouds of Witness by Dorothy L. Sayers.

First up, a non-fiction offering, A Short Walk in the Hindu Kush by travel writer, Eric Newby. This is my book 34 for Bev's Mount TBR 2014 challenge. 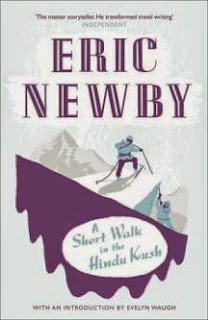 In 1956 Eric Newby decided to temporarily leave his job in the London fashion industry and go walking and climbing in the Hindu Kush, which is a mountain range that stretches from central Afghanistan to Northern Pakistan. He travels with a friend, Hugh Carless, a diplomat who is between posts, but close to taking up a position in Iraq or Iran (I can't remember which.) The two men are complete novices at climbing mountains so start by taking an intensive three day course in Wales, in which they learn not much more than the basics. They travel to Afghanistan, hire some help and off they go.

What follows is a very interesting tale of adventure and hardship: incredible hardship in fact. The two men really have no clue how challenging the terrain in that country is, how poor the indigenous peoples are, and how hard they will have to work just to walk to the mountains, let alone 'climb' said mountains. It's incredible they survived really, both men were walking skeltons by the end of it. A Short Walk in the Hindu Kush is one of those iconic books that many travel writing fans cite as a 'must read'. I'm not sure I would go that far. I enjoyed it, the writing was excellent and there was plenty of humour. I also found fascinating that Afghanistan in the 1950s was reasonably accessible to foreigners, which it most certainly is not now of course. It was certainly a real history lesson. The only 'slight' drawback for me I suppose is that I couldn't believe how naive they were and how happy they seemed to put the lives of their native companions at risk. But there you go, things were different back then and this book illustrates that extremely well. Glad I've read this travel classic but would probably not read it again. Preferred Love and War in the Apennines.

Lastly, a vintage crime yarn, Clouds of Witness by Dorothy L. Sayers. This is my book 21 for Bev's Vintage Mystery Bingo challenge and covers the category, 'A book with a lawyer, courtroom or judge'. 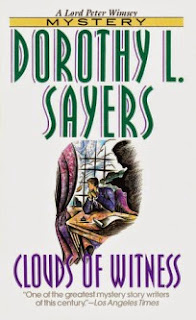 Lord Peter Wimsey's brother, Gerald, the Duke of Denver, is at a country retreat, Riddlesdale Lodge, in the North Riding of Yorkshire. He's there with his family - wife, sister, Mary, sister's new fiance, Denis Cathcart, and various friends and acquaintences. Lord Peter is holidaying in southern Europe but his valet, Bunter, reads about Gerald's arrest for murder in the paper, and the pair return to England. It seems a body was discovered in the conservatory of the lodge, at three in the morning. The dead man is Cathcart, Mary's fiance. Gerald discovered the body but claims he didn't comit the murder, even though he had argued badly with Cathcart earlier in the night. He has an alibi but won't say what it is. Peter, the policeman, Charles Parker, and Bunter, set about investigating the killing. It's a tangled web. Cathcart was not what he seemed, Mary is mixed up in the business somehow, and how is an isoloted farm, up on the moor, and its strange inhabitants connected to the crime? The case of course ends in the courthouse and it's not until then that the truth comes out.

I think this is my fourth Lord Peter Wimsey book, but the second that was actually written. I'm not reading them in order, I should be probably, but it hasn't worked out like that and as far as I can see it doesn't make too much difference. As with the other books in the series, Clouds of Witness was an absolute delight. Sayers' skill at plotting a crime yarn strikes me as second to none and she always treats the reader as an intelligent person, which is more than you can say about some modern writers.

One of the things I love most is the humour, Wimsey's dialogue is at times hilarious:

"Oh, come along old thing. Biggs is some celebrity, you know, and perfectly toppin' to look at, in a marbly kind of way. He'll tell you all about his canaries..."

This kind of thing kept me giggling all the way through.

The book is peopled with some great characters apart from Wimsey. His mother is a joy, I like the policeman, Parker, who clearly has A Thing for Mary, and the farm inhabitants up on the moor were a frightening but also hilarious crowd. Well drawn I thought. I wasn't so keen on the last quarter or so of the book which was courthouse based. But that's just me - I've never been keen on courtroom dramas. But I did think one particlaur scene where Wimsey and Bunter get lost on the moor was one of the most suspenseful scenes I've ever read anywhere.

So pleased that I have another ten Wimsey books to read. No idea which to read on my next outing, Gaudy Night seems to be universally popular but, for reasons known best to myself, I'm saving that for next years reading pile. Anyone got any other favourites?

I've been struggling a bit with reading - I keep starting books and putting them to one side. I can't quite settle to one, although Sansom's latest Shardlake arrived yesterday and I think I'll read that next. I've been struggling more to get down to writing posts about the books!

These are two very different books and both appeal to me, although I don't often read travel books. It amazes me how people managed under such difficult conditions - Sisters of Sinai is another example.

As for Dorothy L Sayers, I read Gaudy Night years ago and loved it, but don't think I've read any more, apart from The Nine Tailors - another very good book. I really want to get some more of my TBRs read by the end of the year, but I'll be searching the library for more Sayers books too.

I love all of them, but I think Have His Carcase is a terrific read - have you read that yet? And the Fens are wonderfully realised in The Nine Tailors, I swear you can feel your feet getting damper as you read!

I have the Eric Newby but far preferred "Full Tilt" by Dervla Murphy
Clouds of Witness is great fun isn't it!

I sometimes get into a "book bind", especially after a flurry of good reads. Looks like your two reads helped your over the hump, there, Cath.

Margaret: I think both of us have read a lot this year and that explains the fall-off in the number of books we're getting through. I have to say too that October has been a fairly busy month and this week will be no better as it's half-term.

The Sayers books are well worth checking the library for. Sayers and Edmund Crispin are my 'discoveries' of the Vintage Mystery challenge.

Geranium Cat: I've read both of those and thought they were terrific.

Val: I've only read one Dervla Murphy, the one where she walks through Ethiopia. I'll keep an eye out for Full Tilt as I've heard it's good.

Clouds Of Witness was excellent.

Penny: 'Book bind' is an excellent description of what's happened I think.

I sure don't consider your reading as having "fallen off" lol... but I seem to be like Margaret right now.. I've begun two different books, read about 100 pages and find no interest to keep me going so that's a waste of 200 pages! I just began another: The Tutor's Daughter.. guess where it takes place?!.. Cornwall, right on a mansion on a cliff!

Pat: For quite a few months I was reading 9 or 10 books a month. October I read 5. Not that I'm worried, it's fine, lotta people never read anything. LOL

I think the older we get the less willing we are to spend precious time reading something we're not enjoying.

I laways wanted a mansion on a cliff in Cornwall. LOL