I spent most of last week in Bonny (and it is!) Scotland so posts here have been non-existant. Now of course I have three to do, this book post, an update on the Mount TBR challenge and a post with some pics of Scotland. So without further ado... a book review post.

The first book covers all of three reading challenges. Firstly it's my book five for Carl's R.I.P. IX challenge. Then it's my book thirty three for Bev's 2014 Mount TBR challenge. And lastly, it's my book eleven for the My Kind of Mystery challenge which is being hosted by Riedel Fascination, which takes me beyond the number of books required for the category 'Secret Messages' (5 - 10) and into a new category, 'Unearthing Clues' (11 - 20). 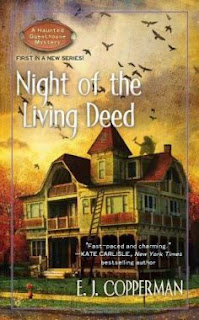 Alison Kerby is now a single mother, recently divorced from her husband, with a nine year old daughter, Melissa. Unable to decide how to earn a living, she buys an historical house on the coast of New Jersey with the aim of opening a guest house for paying guests. Alison is skilled enough to do the much needed renovations herself but a bucket of compound falls and hits her on the head, after which things are never the same again. She discovers she can now see ghosts, but not just any ghosts, one is the previous owner of the house, Maxie, and the other is the private detective, Paul, whom Maxie engaged to protect her against death threats she was suddenly receiving. They tell Alison that they were murdered and want her to help find the culprit as they can't go beyond the boundaries of the property. Alison is far too busy to help and thus reluctant, but when she finds a death threat in her email inbox things naturally change. Alison is no private detective but she must find out what's going on and why ownership of this particular house seems to entail threats on the owner's life, before her and her daughter's lives come seriously under threat.

This was a nice little read for RIP IX. What I didn't realise before I started the book was that the author is a man. I found out halfway through and while it shouldn't have made a difference, in reality, it did. I realised that the snappy humour displayed - by way of Alison, the first person narrator - was of a more male orientated type. I'd realised something was slightly amiss and when I found out the author was male it all fell into place. Not that that was in any way problematic, just slightly odd. In fact, this book is a fun read. If you're looking for a serious, scary sort of ghost story then this is not it. This is, I suppose, a cozy mystery and therefore humour is to the fore with the ghosts able to speak and interact with 'some' humans but not all. The house here is a beautiful, historical building and I found all the renovation details quite interesting, though possibly just a trifle too detailed. Again, evidence of a male author... but that's just my opinion of course. All in all a good, fun read, the first in a series that I'm not sure if I'll continue with. We'll see.

Next, Love Lies Bleeding by Edmund Crispin. This is my book twenty for Bev's Vintage Mystery Bingo challenge and covers the category: An Academic Mystery. 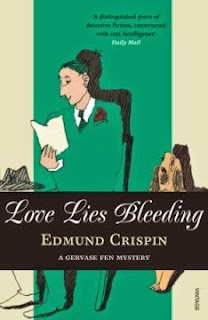 Gervase Fen has been asked to present the prizes at Castrevenford school, a private school in Worcestershire. He arrives the night before and almost immediately becomes embroiled in a murder mystery. Two of the teachers at the school are found dead and a female pupil has gone missing after a failed assignation with a male pupil. The local police are out of their depth and ask Fen, with his experience of solving murders, to help. It seems all kinds of strange events are connected with the case, including some unusual behaviour on behalf of the dead teachers, a mysterious manuscript, student romance, and the death of an old woman in a nearby village. Fen has his work cut out to solve this one, not least because the life of a student hangs in the balance.

Another very enjoyable Gervase Fen mystery. Fen is such an interesting amateur detective. Every inch an academic and just a touch pompous, but he knows he is and thus tries not to take himself too seriously. Crispin's writing style is wonderfully humorous and droll and it's quite possible to laugh yourself through his books. There's another glorious chase scene later in the book which would do an Ealing comedy proud. Totally bonkers and thus delightful. I like books set in schools so this appealed to me on that extra level and I wish there were more academic mysteries around to be honest; I find them wierdly enjoyable. I think this is my fourth Fen mystery so far so it's nice that I still have five left to read. I hope they're all as good as the four I've read so far.

omgosh! a mystery in New Jersey! lol did they name the town? curious to see if it was a town I would know!

Geez Cath TWO books? I am back to a crawl on my reading..the one I am reading "Five Came Back" is about 5 directors from Hollywood who joined in WWII to make propaganda movies using real footage from the war.. very interesting however it's not a "pageturner" so I am lucky if I read one chapter (or 2) a day! I hope I can do one more for RIP I've read 5 so far. but my book count for the year sounds more like for 2 months instead *sigh*

"Night of The Living Dead" sounds like a fun mystery! I'll have to see if I can find it here. Glad you are enjoying RIP challenge this year so much! I'm hooked on Julia Spencer Fleming, thanks to you :-) Just finished Book 4 - and even have a review up! lol

Both books sound really good, Cath! I'm looking forward to your photos of Scotland - hope you had good weather.

Pat: The town is called Harbor Haven. Assume it's fictitious?

Your latest book sounds interesting, you read such a lot of non-fcition. Puts me to shame.

I think I have 5 so far for RIP as well.

Susan: JSF is such a wonderful author. You're now further ahead than me as I've read just three. I've loved them all. I'll skim your review later as I haven't read that one yet.

Margaret: I'm hoping to get some photos up in a day or two. We had excellent weather and feel lucky that we went last week rather than this!

unfortunately... fictitious... although there is a Harbor Haven camp for kids in NJ lol

Good books! Just don't equate men with writing cosy's! I have a JSF on my shelf but haven't gotten to it yet. Looking forward to the Scotland photos!

I don't think this could've been set in the kid's camp, Pat. LOLOLOLOLOL!!!

Peggy: I don't equate cozy mystery writing with men either.

I'll get the photos up soon, for some reason this week's been busier than I expected.

The first one probably isn't for me, but that is a good thing since I already have way too many books. I need to read more Edmund Crispin. I have only read two or three. I bet there is a list of academic mysteries out there somewhere. I keep hearing about them here and there. If I find one ever I will send you a link. Have you heard of / read the Amanda Cross books (from the 1960s). I read them a long time ago.

I'm glad you enjoyed the Crispin. If you haven't read Swan Song yet, it's my favorite among his books, with The Moving Toyshop not too far behind. But they're all very good (with the possible exception of the last one, Glimpses of the Moon). Enjoy!

Tracy: I know that feeling of being glad a book is not for you. LOL.

You're probably right that there's a list of academic mysteries somewhere. I hadn't thought to Google it but will. One of my all time favs is Gentlemen and Players by Joanne Harris.

No, I haven't heard of the Amanda Cross books so will look those up later.

Les: I'm slowly working through all of the Gervase Fen books. The only one I have left that I own is Glimpses of the Moon funnily enough. I know my library has Swan Song so I can get that there. Others will have to be reserved or I might strike lucky and see them in a charity shop. I'm very happy to have discovered Edmund Crispin via the Vintage Mystery challenge.

Oh, I have to say that I think Glimpses of the Moon is a riot! So funny and silly.

Night of the Living Deed is an awesome title for a cozy! Too bad it didn't fully live up to such a title.

Opinionsofawolf: I know... such a great title! LOL! And as a story it wasn't too bad really.