Time flies when you're having fun and once again Carl's R.I.P. IX challenge has come and gone in the blink of an eye. 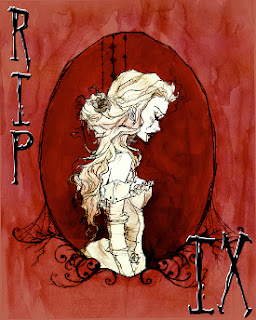 As usual I decided to do:

Read four books, any length, that you feel fit (the very broad definitions) of R.I.P. literature. It could be King or Conan Doyle, Penny or Poe, Chandler or Collins, Lovecraft or Leroux…or anyone in between.

I managed to read seven books in all and these are they:

3. The Twenty-third Man by Gladys Mitchell

4. A Coven of Vampires by Brian Lumley

5. Night of the Living Deed by E.J. Copperman

6. The Unburied by Charles Palliser

7. The Sittaford Mystery by Agatha Christie (to be reviewed)


I enjoyed all of the books very much indeed. I seem to have quite successfully combined my current crime book addiction with this RIP challenge by choosing crime books that all had a supernatural element of some sort in the plot. Sometimes it was more to the fore than others, but all had something spooky about them.

Hard to pick a favourite but if I had to I think it would be a draw between The Unburied by Charles Palliser and Agatha Christie's The Sittaford Mystery. Both were cracking reads.

So that's R.I.P. over for another year. Huge fun and thanks to Carl for hosting once again.

LOL I just went to FB and found your link.. funny thing is I just was writing a short "wrap up" myself! LOL..I love it when we "sisters" think alike! lol You always read so much I am amazed! I swear you are turning into a speed reader!

I know you read so many more books during that time! I have read so few books this year but blaming a lot on depression/ anxiety and circumstances! I won't even come out to a book a week by the end of December..ah well.. as long as I still WANT to read I figure I am ok!!
x0x0x0

It sounds as though you've had fun! I haven't read that Mitchell, but from your review, I must do so soon. I'm pleased to see your comments on the Gideon Fell books, too - more to add to the TBR list.

I love the Sittaford Mystery but ALL the others are new to me so my tbr pile could be in danger..... lol

Nice group of books, Cath. I thought about finding a Gladys Mitchell because she often has supernatural elements, but had too many other books I needed to read. I liked the Sittaford Mystery a lot also.

An interesting mix of books and I must get round to reading some of those authors soon. The only one I've read is The Sittaford Mystery. I'm looking forward to your review. I though it was a good read, but not quite up there with her best.

As always, you give me some great fodder for future reads, Cath. Well done with your R.I.P. challenge. :)

Pat: Noooo, I'm no speed reader. Back a couple of months ago there were less distractions so all I was doing was reading. lol

You can't read loads when you don't feel great. But yeah, as long as you still want to that is positive at least.

Geranium Cat: There are 'tons' of the Gladys Mitchell books, she wrote over 50, so you should find one or two in the library.

Tracy: I gather she was quite interested in the supernatural and often put elements into her books.

Margaret: I loved The Sittaford Mystery... probably because it's 'Devon'. You're also likely a better judge than me as you've read many more AC books than I have.

Penny: That pleases me very much. Thank you.

You read some really good books, CAth. Congratulations on having such a good time with the challenge! I did really well too, though still have to my wrap-up post. It was a good challenge this year.

Thanks, Susan. I didn't read as many as I would normally read but I did OK I think. Look forward to your wrap-up when you feel up to it.