I seem to have become a convert to Agatha Christie. Not that I 'disliked' her books before, I was just not bothered. I've always loved the dramas that the TV companies put out - Miss Marple, Poirot etc., but have not read any of her books since my teenage years and then not all that many. But perhaps Agatha Christie grows on you as you get older, for certain people anyway, because that's what's happened to me as I absolutely loved The Sittaford Mystery. It's my book twenty one for Bev's Vintage Mystery Bingo challenge and covers the category: A Country House mystery. It's also my book seven for Carl's R.I.P IX challenge. 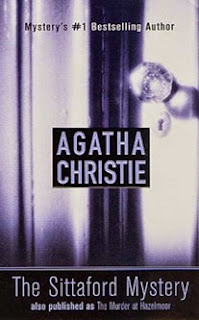 Sittaford is a village that perches on a hill on Dartmoor. It's not in a pretty little valley with trees and a bubbling brook, but is high up, windswept and isolated, and you have to be hardy to live there. That's why the few inhabitants are surprised when a mother and daughter couple, the Willetts, take Sittaford house, built and owned by Colonel Trevelyan, for the winter. The Colonel moves into a nearby village but his close friend, Major Burnaby, continues to visit him on a regular basis.

The visits have to come to a temporary halt though as Sittaford is cut off by deep snow. Instead, the major goes to visit the Willetts for the evening along with a few other neighbours. A seance is suggested and, although not all are happy, it goes ahead. What happens is shocking. The glass suggests that Colonel Trevelyan is dead and was killed at 5.25 that evening. It must be nonsense. Mustn't it? Major Burnaby is sure of it but is uneasy enough to take himself off and walk through the darkness and the snow to where the colonel is staying to see if he is all right. He's not of course: he's been murdered.

Suspects are many and varied, his relatives - sisters, nephews, in-laws - all have reasons for wanting him gone. Others come under suspicion too, such as the man who 'does' for him, Evans, and his new wife. Inspector Narracott investigates, along with Emily Trefusis, the fiancé of one of the colonel's nephews who has been arrested, and Enderby, a journalist. It takes the combined talents of all of them to solve this hugely complicated case.

I wonder if I liked this so much because it was set on Dartmoor? I know the area and it's always nice when you're reading a book to be able to picture the setting easily. And I'm especially fond of 'snowy' backgrounds. The ravages of winter are not that great when you have to be out and about in them but sitting cosily in your favourite armchair reading about deep snow and cold temperatures is very enjoyable. To me anyway.

I don't think it was just that though. I liked everything about this story. Emily Trefusis was such an interesting character. A 'managing female' in the making but Christie didn't use this in a derogatory manner: she celebrated a strong woman who knew what she wanted and set out to get it. I loved that. She came over so powerfully it made me wonder if Christie was using herself as a model for the character - I seriously need to read her autobiography which is sitting on my bookshelf right now.

The other thing I've discovered I really like is the vein of humour running through some of Christie's books. I'd somehow not been aware of that and it's come as quite a surprise. Her humour is based on observations of people's behaviour, the bizarre things we all do and say. I wish I'd collected a quote or two but I forgot in the enjoyment of the book. Suffice to say she didn't just write crime books, she was a sharp observer of human nature and behaviour.

I gave The Sittaford Mystery a five on Goodreads. For me it just hit 'exactly' the right spot for all the reasons I've stated. I plan to read a lot more Agatha Christie but will have to be careful what I choose. Some of the plots of Poirot or Miss Marple stories are overly familiar from watching them on TV. I think there are plenty of others though - several series such as Tommy and Tuppence, a few standalones and loads of short stories, plus her autobiography which, after reading Come, Tell Me How You Live a few weeks ago, I now can't wait to read.

oh goodie! hooked on another author! and one who wrote A LOT! lol If I look into my crystal ball I see Cath's trb pile growing! lol

love to hear when you really enjoy a book, most especially when it's "unexpected". I mean we always figure we will like a book that we bother to read..but those few that are big stand outs make us happy that we read so much!

Pat: Yeah, too many good authors, too little time. lol

It's so great when a book exceeds our expectations. I love it when that happens.

Glad you liked this! Her Autobiography is fascinating. I really must read Come tell me how you you live soon.

Margaret: Yes, I bet her autobiography is well worth reading. Next year I really want to get to these types of books that have been sitting on my tbr shelf for ages. I can highly recommend Come, Tell Me How You Live. Excellent read.