I'm rather behind with reviews even though my reading has slowed down a bit over the last few weeks. My first three books of November have not been reviewed here so it's time for a catch-up post.

First up, The Hills is Lonely by Lilian Beckwith, which is my book thirteen for Peggy's Read Scotland 2014 challenge. 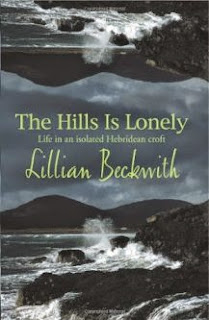 Lilian Beckwith, advised to take a rest somewhere quiet for the good of her health, advertises for suggestions as to where to go from the readers of a magazine. One of the replies was from a woman, Morag McDugan, who lives on the Isle of Skye. Lilian is captivated by the letter, which is rather naively written, and decides on the spot to go and stay with Morag. Her arrival is not auspicious as she arrives on a dark and stormy evening and wonders if she'll even survive being ferried across to the island, let alone anything else. 'Anything else' turns out to be having to climb a six-foot wall to get into Morag's house as the tide is in and her front gate is submerged! After that it's culture shock after culture shock as the English woman learns to live with the idiosyncracies of an island population who are insular in the extreme, about fifty years behind the times, and loathe the English with a vengeance.

This was a very gentle, amusing read... basically a 'fish-out-of-water' story in which the joke is how the English woman, used to late 1950s mod-cons, learns to live on an island which has no mod-cons at all. What I haven't been able to discern is whether this is fact or fiction. I was sure it was fact but I gather she didn't move to Skye alone, she went with her husband and the books are based on the characters she met and became involved with. Which makes them fiction... except that I'm still not sure. They're classed as 'non-fiction' and 'autobiographical' on Goodreads. Hmm. Anyway, that aside I enjoyed the beautiful descriptions of the island very much indeed. The author certainly knew how to convey the moods of the weather and its affects on the stunning scenery very well indeed. As a cultural thing it was fascinating to hear how basic life was on the island in the fifties, certainly as regards medicine and healthcare, but also food-wise (they lived very much on what the sea provided), transport, communications, and indoor plumbing (there was none). I was less enamoured of all the drinking and drunkeness but that's just me being a prude. Was the author mildly patronising about the locals? I'm not sure. I don't *think* so but others might. I enjoyed the book and it made me even more determined to visit the Isle Skye one day.

Next, Laurels are Poison by Gladys Mitchell. This is my book twenty two for Bev's 2014 Vintage Bingo Mystery challenge and covers the category, 'A book with a method of murder' in the title. 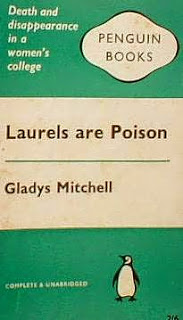 Deborah Cloud has a new job at the Carteret teachers' training college. She is to teach a bit but mainly she will be the new sub-warden of Athelstan House. She walks into a mystery. The warden, Miss Murchan, has gone missing and the principal of the college has called Mrs. Bradley in to take her place and try and find out where the missing Miss Murchan has gone. It's a can of worms. There's some kind of malicious prankster abroad. At first the pranks are relatively harmless, chamber pots going missing etc. Then clothes trunks are raided and people's clothes slashed, a girl's hair is cut off in the middle of the night, and things take on a far more sinister note when the house cook is found murdered. Mrs. Bradley, Deborah and three trainee teachers put their heads together to get to the bottom of this very complicted mystery.

I think this is my third 'Mrs. Bradley' mystery and possibly my favourite so far. I liked the college setting and peep into the 1930s style of training teachers. I believe Gladys Mitchell was herself a teacher so doubtless knew all about it. The three girls who help solve the mystery enliven the plot no end but I did have difficulty occasionally with the way one of them spoke... the 1930s modern slang and literary quotes. It was a good whodunnit in that I couldn't really work out who, why or how so I was kept guessing until the very end and then wondered why I'd been so thick. Happy to have a few more of these on my Nook to read when I don't want a book that's too deep. Good fun. 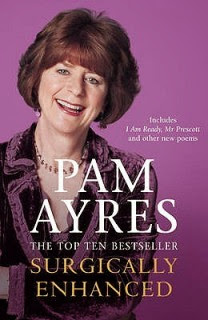 This is a book of essays mainly, interspersed with some of Pam's inimitable poetry which I'm a bit of a fan of, I have to say. I love seeing her reading her own work on TV as she has an amusing manner about her which is always hilarious - to me anyway. I'm sure there are plenty who think quite the opposite. The essays are basically all about her life. Her childhood in Stanford-in-the-vale in Berkshire, her marriage and children (rather oddly as a married woman she's 'Mrs. Russell', as am I of course), learning French, adopting a dog, canal holidays, packing to go on holiday, cruising, shopping on the internet, the perils of using a new hairdresser when you're away somewhere and much, much more. I enjoyed every single one, probably because I could identify very strongly with quite a lot of it. Wierdly, I preferred the essays to the poems and I think that may be because her poetry is best heard read out loud rather than read silently to one's self. They were not bad though and one struck a particular chord with me - There's Some Mistake about the sadness of aging and looking back at your life. She hit the nail right on the head with that one. All in all, an enjoyable random grab from the library and I really must get around to Pam Ayres' autobiography next year.

Cath, I've been waiting to see what you thought of Beckwith! I read all her books a few years ago and then donated them to the library. Wish now I had kept them, they didn't even put them in the system! I don't remember her having a husband. The island characters were lots of fun and probably exaggerated by her. I don't think it was a 'love letter' to her fellow islanders, that's for sure. I think Katrina told me they were quite upset with her actually over the books. Do you think you would read another one?

I am guessing you chose the book about Skye because of Letters from Skye and wanting to know more of the Island.. since I loved that book also it is tempting. Also had a friend from California go over there and she said she went to Skye and felt like she never wanted to leave! It sure makes the isle of peek interest!!!

Like Peggy Ann, I read Lilian Beckwith's books years ago, but I borrowed them from the library. I liked them very much and at the time thought they were non-fiction. Maybe they are fictionalised autobiographical?

I still haven't read any of Gladys Mitchell's books - maybe one day ...

Now I did like Pam Ayres when she used to be on TV reciting her 'pomes', so I think I'd like her books - hope the library has some.

I'm behind with reviews too - I may have to miss reviewing some books now, as I can't remember much about them.

Peggy: That's happened to me too. I donated some really nice books to my library, expected to see them on the shelves, but they just disappeared. I checked for a couple on the online library catalogue even. Nope. My guess is they sold them in a book sale. *Not* what I'd intended so I haven't donated again. I give the books I'm not going to read again to a charity shop.

As you can see it throws doubt on what her books really are. It seems she may have just used the characters she met in her books. Yes, I gather the islanders didn't think much of how she portrayed them and she ended up being ignored or something. If I see any more in the library then yes I'll probably read more.

Pat: Yes indeedy, that's exactly why I read the book. LOL! The print in my paperback is actually quite readable so don't buy a copy, I'll send you mine at some stage.

I gather from people who've been that Skye is a very beautiful place.

Margaret: They could well be fictionalised autobiographical (that's a mouthful!) I was a bit surprised to find out that they were anything other than exactly what happened. Oh well.

Pam Ayres' books are pure charm. The essays about real life made this one a real pleasure.

I have the same problem, if I don't keep up with reviews, I forget! It's not helped that I've read more books this year - mainly for all my challenges - and thus have had more reviews to do. It's quite hard work to be honest and I think I'll cut down a little next year.

I read this many years ago and assumed it was nf since it was in that section of the library. After reading this, I went to http://en.wikipedia.org/wiki/Lillian_Beckwith and they mention the 'fictional' island. oh well.

oh cath... don't even think about sending a book ..even a paperback! Our postal system is going to pot but they don't help their self by doing things like putting "book rate" back on international shipping!

I think I might have a copy of The Hills are Lonely! I know I have one of her books. That's a good review of it, too :-)

I have that Gladys Mitchell book also! A little uncanny, isn't it? If only I was in a better reading mood....maybe soon. I'm glad you enjoyed this one so much, it does sound interesting and I'm glad it holds up so well over the years.

Pam Ayres, know nothing about her, though I must say you make her sound like a fun read!

Nan: I still really have no idea which it is but Margaret's suggestion that it's 'fictionalised autobiographical' sounds spot on to me. Odd though.

Pat: The UK post is not as bad as yours, not quite as expensive to send a book. I'll think about it though.

Susan: Yes, it is odd that we seem to own so many of the same authors. LOL! I hope you get your reading mojo back soon. My own reading has tailed off a lot recently as well.

I think your hubby will have heard of Pam Ayres.

Glad to see your review of Laurels are Poison. I am trying to keep track of good reviews of Mrs. Bradley books since there are so many books in the series.

Oh, goody; another book about Isle of Skye. On my list, fictional or not. Lovely as always, Cath.

Penny: I wonder what it is about Skye that we're all so fascinated?