My first book for the R.I.P. X challenge is Death du Jour by Kathy Reichs. 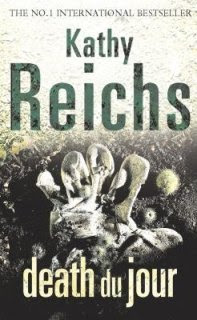 The story begins with forensic anthropologist, Dr. Temperance Brennan, exhuming the remains of a nun buried at the end of the 19th. century, in the remains of an old church in Montreal. She returns home exhausted but there's no rest for the wicked as not many hours later she's called out to help investigate an arson attack. A family, parents and two babies, have been murdered and Tempe also discovers the charred remains of an elderly woman in the basement. It proves impossible to discover who they all are as the neighbours don't know them and clues in the remains of the house are non-existant.

Tempe returns to her other job in the university in Charlotte, North Carolina, but it's not long before a colleague from Montreal, Andrew Ryan, calls about the arson case. He's travelling south to pick up the trail of the dead family. Phone calls have been traced to a town on the South Carolina coast where a cult has taken up residence and Ryan wants Tempe to go with him to investigate. Tempe has a lot going on, plus is fighting an attraction to Ryan, so is reluctant to go. She's eventually persuaded though and travels south for a few days with her daughter. They eventually track the cult's remote residence to an island off the coast. Oddly it seems orderly and well-run but Tempe feels they're hiding something. It takes more deaths and all her ingenuity and bravery to discover what that thing is.

I thought this second book in the series was even better than the first. I liked the Montreal setting of the first book and this one is partly set there too... but when it moves south to The Carolinas it becomes rivetting and more psychologically frightening in my opinion. It's the cult thing that creates that fear and there's a lot about the issue in the story. How do they recruit people? Why do people believe their nonsense and get sucked in? How do they hang on to their recruits and what can sometimes be the tragic outcome? (Think Waco.) I found it fascinating and not a little scary.

It wouldn't be any exaggeration to call the pace of the plot 'relentless'. It's one thing after another with dead bodies all over the place and poor Tempe being required to be in a dozen places at once, permanently exhausted and drained from the horror of what's going on and what she has to do. I felt for her and wished she would occasionally say, 'No' to people.

Towards the end the action moves back to Montreal and final scenes take place during the famous ice-storm of 1998. This was brilliantly done and is one of the best parts of the book. Edge of the seat stuff really. Kathy Reichs really does do 'place' very well indeed and this book illustrates that well whether she's describing the heat and humidity of South Carolina or the frigidity of winter-time Quebec.

This is not your normal ghostly R.I.P. read. But for me the very real background to this crime story made it just as frightening as any supernatural yarn and a good book for the challenge.

I never knew there were books out that used the character from "Bones", Temperance Brennan! Oh! and it's another series! you will be the queen of series yet! lol Oh and I can't thank you enough to tell me after I read Mayhem that it will be a series! argh!

And I do believe murder mysteries belong in RIP.!

I've only read 1 or 2 books in this series and not in order. I know. Not like me at all. I really like the TV series, but have been a little 'meh' about the books I read. Perhaps I need to start at the beginning. This one does sound good.

I've often wondered if I ought to give this series a try. I think you've just convinced me that I ought! :)

It certainly sounds like an RIP read to me - very frightening and as you say cults are fascinating and very scary! I have one book by Kathy Reichs - the 9th one. I'm not going to wait to find/read the earlier ones. The Sunday Times is quoted on the back cover 'Her best [novel] yet', so I shall start with this one, 'Break No Bones'. I may get round to it for RIP.

Pat: Yeah, I gather the series Bones is based on these books. I've never seen the TV series but one of my daughters says it's quite different to the books.

Kay: I expect like all series they vary a bit. So maybe the one or two you read weren't that great. I was told that the TV series and the books are different though, so that could be why the books didn't do it for you.

tidbitsand babblings: I always think anything's worth a try. :-)

Margaret: I see no reason why they can't be read out of order. My husband never reads anything in the right order! LOL!

I went to Barter Books today - and came home with Deja Dead, so now I cab start with the first one in the series!

Gosh you put me to shame ....I think I need an I'm a slow reader badge!
Lovely review

Margaret: I hope you enjoy it. And I got the first S.J. Bolton book from the library. Not that I would say we're a bad influence on each other... ;-)

Val: Well, you have a young family and live in a wonderful place. I wouldn't read much in those circumstances either! Plus, it's not how quick you read but whether you enjoy the books you get to.

I haven't tried this series although I really like the TV series. At least the 6 or 7 seasons that we watched on DVD. I do have the first one and maybe this one too. And I like to read books with Canadian authors and with Canadian settings. So I really should try these.

Tracy: I gather the books and TV series are not exactly the same. I'm not sure if Kathy Reichs is Canadian (don't think she is) but the books are mostly set there.

I agree, the TV series is very different and at one time that stopped me from wanting to read the books. Then when I read they were set in Canada (or mostly there) and that she is Canadian, I got interested again. Not sure how much I will like them but definitely interested in the Canadian setting.

Tracy: Ah, she *is* Canadian... I could have checked that for myself. LOL! But that's good. Quite frankly I'll read anything set in Canada. That said, the South Carolina bit in this book was also very good.