Some reading for RIP X today. Firstly, my second book for the challenge, River Marked by Patricia Briggs, followed by a few short stories of a supernatural bent. 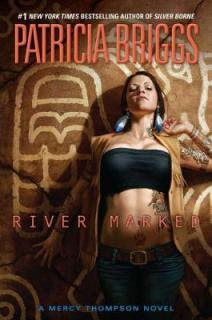 Mercy Thompson, who is a 'walker' - a human who can turn into a coyote - is on honeymoon with her new husband, Adam, the Alpha of the local werewolf pack. They're in a motorhome on the borders of Washington State and Oregon, miles from civilisation. It should be an idyllic honeymoon. What they don't realise is that the death-rate in the river they're camped beside has soared over recent months, someone or some'thing' is luring people to their deaths in the water. It doesn't take long for Mercy to have an encounter with the culprit, Mercy, after all, attracts trouble like moths to a flame. But this is something different to her normal kind of trouble... vampires, fae, werewolves... and in order to defeat it Mercy will need every weapon available to her including that of her Indian heritage.

Patricia Briggs' Mercy Thompson series is one of my favourite urban horror/fantasy series and I usually try to read at least one every year for R.I.P. As usual it was an excellent read, made more interesting for me because of its wilderness and river background and the inclusion of a lot of Native American folklore. There were many revelations about who she is as well and naturally she's not who she, or we, thought she was. All intriguing and hopefully more of that to come in future books. Her relationship with Adam has also developed, and is still developing, and that too is always as interesting as the actual plot. Good series, though I'm not keen on that cover... it sexualises Mercy in a way that she isn't in the books. No matter, I read in it ebook form so didn't have to look at it.

As well as reading it for RIP, River Marked is also my book 20 for Bev's Mount TBR 2015 challenge.

Next, some short stories for:

And the book I've been reading creepy stories from is this: 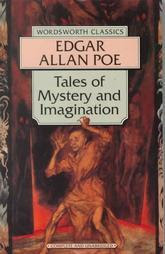 The Gold Bug is a story set in the vicinity of Charleston, South Carolina. (I seem to be specialising in stories set in that state at the moment...) The narrator has a friend he visits on a lonely island just off the coast. The friend finds a golden beetle that looks like a skull and it bites him. Said friend becomes obsessed with this thing and I won't add any more as that would involve spoilers. The story is really well written in that lovely old-fashioned manner that I love. I also like the way that authors from that era had no problem with close friendships between men. This is a weird story rather than a ghostly one... I don't mind either to be honest... and I thought it was quite good.

The Facts in the Case of M. Valdemar is *very* weird. The narrator is a mesmerist and realises that no one has ever mesmerised someone who is in articulo mortis... on their death bed. So he finds a way to do it. Naturally. LOL! I liked this one too. Well written and nicely creepy.

MS Found in a Bottle is a story of a ship lost in a violent storm. Good descriptions of the storm but this one didn't really work for me. I thought it got a bit bogged down in all the detail. I couldn't really follow it too well... it's probably me being a bit slow.

The Premature Burial is an unusual mix of what I 'assume' to be factual accounts of people who were buried alive, when their relatives thought they were dead, and a fictional ending involving the narrator. The former were thoroughly alarming if I'm honest. (It also begs the question, 'How many people who were cremated were still alive?' but we won't go there...) Fascinating... but horrifying. Then it materialises that the narrator himself suffers from catalepsy, a condition where patients lapse into a kind of coma that so closely resembles death that hardly anyone can tell the difference. I won't say anymore but I liked the ending and the whole story to be honest. The real cases were interesting and the mix of two kinds of story telling worked very well and really kept my interest.

The first three stories were the first in the book and then someone listed a few good ones for me and The Premature Burial was one of those. I've neglected Edgar Allan Poe for years because I'd read a few stories by him in various anthologies and not been that struck. Not sure why. Having tried him again I'm revising that opinion somewhat and will definitely read all the stories in this collection for R.I.P. X.

Patricia Biggs is pretty big over here but I've never read her. (but then I'm not a big werewolf fan). ahhh atmosphere!! yes! that is such a big part of my reading also! when you can feel like you are there (be it in a forest or in an opium den).. you know you have a good book!

I think I read Poe in 4th grade! Pit and the Pendulum ..but nothing since. but I believe it's mostly my non-taste for short stories. I wish I could like them but if I like the characters and such I am not satisfied with a short story lol.

I signed for 1 book for rip and listed 3 so I am not listing what I read now... it's not the same without Carl.. but as you can see I read this type book most of the time anyway! oh! and no way are you a book hoarder!! *snort*

I had sort of assumed (for no good reason, because I honestly knew very little about them) that I wouldn't enjoy the Mercy Thompson books. But after reading your post here, I'm think I might have to banish that assumption and give these a go.

Oooh, really scary books! I've read some of Poe's stories and thought they were disappointing, but I don't think I read The Premature Burial. It was mentioned in the book I'm currently reading - The Ghosts of Altona - and I must say it is a completely scary concept.

Pat: PB is not as well known over here although her books are in really large bookshops now I notice. When I first started reading them you couldn't get them here at all and had to order from Amazon,

I get what you mean about short stories. I always think I like them more than I actually do. LOL

I think I may actually struggle to make my four books to be honest. We'll see.

tidbitsandbabblings: To be honest I'm not a huge fan of the horror/romance kind of genre but I make an exception for this series.

Margaret: That's odd that The Premature Burial was mentioned in the book you're reading. I thought that one was very good, the others... a bit so-so.