A couple of titles for this year's R.I.P challenge today. First up is Now You See Me by S.J. Bolton, my third book for the challenge. 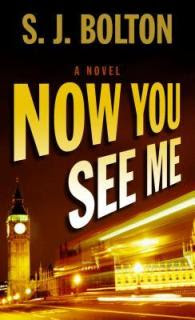 London policewoman, DC Lacey Flint, is returning to her car one night after an interview with a potential witness. Leaning against her car is a woman who's been brutally stabbed: Lacey is unable to save her and she dies. She finds herself working closely with the Major Investigation Team who're called in to investigate the murder. Her new colleagues are not all to Lacey's liking, especially as it seems one of the men suspects Lacey of the killing. It's not long before a connection is made between the murder and Jack the Ripper's first murder, date, circumstances and so on. Lacey being an expert on the Victorian serial killer finds herself even more to the fore in the investigation. When another body is found brutally murdered on the anniversary of the second Ripper killing it's quite clear they have a copy-cat serial murderer on their hands. How can Lacey help catch the killer and still keep hidden the secrets she's harboured for many years?

I probably wouldn't have picked this up off my own bat but Margaret at Booksplease has been recommending the series lately and my curiosity was piqued. And I'm really glad as this was a cracking read. *Not*, I should add, for the faint-hearted as it pulls no punches when it comes to describing the mutilated bodies. If you can cope with that and enjoy trying to unravel a complicated plot and guess a main character's secrets then the series is well worth a try. The tie-in with Jack the Ripper worked very well for me, loads of interesting info such as the fact that the original murders spawned many copy-cat killings and police had a really tough time deciding which ones were 'canonical' murders and which were not. Plus, journalists and police added to the confusion by making 'facts' up so no one really had any idea *what* was going on. No wonder they never caught him. There's also a fascinating theory on who the murderer was in Now You See Me. Worth reading just for that. I shall definitely grab book 2 from the library and hope to read the 4 (or is it 5... Fantastic Fiction has 4 listed and an unnumbered one underneath?) books that have been written so far.


My fourth book for this year's R.I.P challenge is The Saint Germain Chronicles by Chelsea Quinn Yarbro. 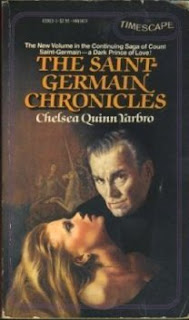 1. The Spider Glass. This is a story told around the fire with six guests attending and listening, set in Edwardian times. The narrator is an English aristocrat and he's retelling the story of what happened to one of his female ancestors in the 17th. century. Her and her son were left abandoned in Paris with no way of fending for themselves. She was so desperate she tried to rob a stranger who turned out to be the vampire, The Compte de St. Germain. The story describes how she became suspicious of his lifestyle and what she did about it. This was not a bad story actually. Told in the tradition of English ghost or weird tales... around the fire with some fascinated listeners. The end was no surprise but I enjoyed it nevertheless.

2. Renewal. James, a war correspondant, has been involved in a motor accident in France in the middle of WW2. The other passengers are all killed and James wanders off and heads for the house where he and his lover, Madelaine, were so happy, hoping to find her there. She's away and instead he finds an enigmatic count there - St. Germain. Interesting little story. You're drip fed information but again the outcome is not a surprise to anyone who reads a lot of this kind of thing.

3. Art Songs. A short little story that takes place in a concert hall. It underlines the deeply loving relationship between St. Germain and Madelaine and introduces the idea that the vampire will have move to America to avoid being investigated for his business holdings and strange lifestyle.

4. Seat Partner. St. Germain sits next to a young woman on the plane to the USA. She tells him about her life. He deduces that she's living her life as others want her to rather than as she wants. Interesting little vignette.

5. Cabin 33 St. Germain and his companion come manservant, Roger, are now living in the USA and running a log cabin holiday business in the Rocky mountains. But something is the matter with one of his young guests. She seems listless to the point of illness and her parents don't seem in control of the situation. Someone needs to investigate and it falls to St. Germain to be the one.

The stories are also interspersed with letters the vampire sends to various people in the stories and at the end there's an essay by the author about The Compte de Saint Germain.

Twenty five years ago I would have adored this book. I'd just discovered the St. Germain series after finding Cabin 33 in an anthology of vampire stories. I subsequently managed to find the first three books in secondhand bookshops here in the UK... American books published in the days before the internet... nothing short of a miracle really. I adored them all... and wanted this short story volume more than I can say but couldn't find it anywhere.

Fast-forward twenty five years and purchasing a copy from Amazon Marketplace was easy-peasy (we don't know we're born now). What a shame I seem to have outgrown the books. I still like Cabin 33... it's the only short story I have ever finished reading and immediately gone back to the beginning and read it all over again. I also liked the first story, The Spider Glass, but the rest just felt like so much padding and I found it disappointing. A few years ago I read a couple of the later instalments of the novels of this series (there are 27) and didn't enjoy them all that much. I thought they got bogged down in historical detail, as though the author had done her research and was determined to use it all. Ah well, never mind, some you win...

hmmmm you must be taking a break from puzzles eh?! lol You See Me Now sounds good... soon my wish list will be as big as my tbr pile! *groan* lol

Kind of, Pat. Still doing jigsaws but not at some crazy rate. I did 10 in August only on my 2nd. one for October at the moment. LOL

Now you See Me is a bit graphic in its descriptions of the murders but I've read worse. The Jack the Ripper connection was 'really' interesting and you'd probably like that it's set in London. But it is a modern crime yarn not Victorian, though it does go into the JtR murders quite extensively.

You have once again piqued my curiosity.
It is interesting how books, or we, change over time.

Penny: Very pleased to be the piquer of your curiosity. :-)

Yes, it is and to be honest I feel a bit sad that I no longer have as much interest as I did in all those wonderful Victorian ghost stories I used to read. Oh, well.

I'm glad you liked Now You See Me. I struggle with graphic scenes but I was pleased I read on because it is compelling reading and I like the puzzle element. Lacey Flint is a complex character and after reading four of the books about her there is still more to discover about her past life - before she joined the police force, that is.

I have not tried an S. J. Bolton book yet. I may have that book, not sure. I haven't read anything with vampires yet, although I may try the Sookie Stackhouse series.

Margaret: Thanks so much for recommending the Lacey Flint series, I think I'm going to enjoy working my way through them. The graphic scenes were not as bad as some I've read... Karen Slaughter, Tess Gerritsen etc. I'm pleased to hear that there's a lot more to discover about Lacey... I have to say the end took me by surprise as I'd been sure all the way through that she was 'the other one', if you get my drift. Not often I'm thrown like that. :-)

Tracy: I've read a couple of the Sookie Stackhouse books and they were 'OK' but for some reason I've never felt like reading them all. Think I may have grown out of the genre to be honest. A shame but it happens sometimes.

I've tried a Tess Gerritsen book - so I agree that the Lacey Flint books are not that bad at all. :) And I thought she was 'the other one' too.

Margaret: Nope... definitely not as bad as all that. Oh good, glad it wasn't just me. Suspect we were supposed to think that. LOL