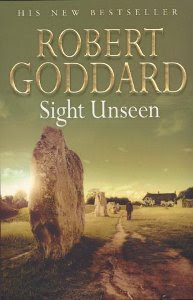 In his forties and existing aimlessly in Prague, David Umber is approached by the retired police inspector who investigated a crime he witnessed as a student back in 1981. It took place at Avebury among the very famous stone circle there. A girl working as a nanny took her eye off the youngest of the three children for a moment and the child, a two year old girl, Tamsin Hall, was snatched. In the ensuing panic her older sister stepped out in front of the van in order to stop it taking her sister away and was knocked over and killed. Tamsin has never been seen since and is presumed dead by all.

The police officer, Sharp, is convinced that he didn't investigate as well as he might have and now wants to put things right. A feeling exacerbated by an anonymous letter he's received. He persuades David to accompany him back to England and help him reopen the investigation. David was in Avebury at the time to meet a man called Griffin who wanted to show him a book of letters by Junius, an 18th. century anonymous writer of venomous letters about royalty and politicians. Junius was David's Ph.D subject and he had done much research into his identity. The man, Griffin, had failed to turn up in 1981 but in all the chaos and confusion no one had tried to find out why.

Back in England, Umber travels into Wiltshire, with Sharp, to the scene of the crime. The parents of the children have divorced, the mother and her new family still live locally, the father has moved to Jersey with his surviving son. Unsurprisingly they do not welcome being made to relive the whole horrifying experience over again, particularly as a sex offender in prison has confessed to kidnapping and murdering young Tamsin Hall. Then the sex offender is murdered himself and Sharp and Umber realise they have touched a nerve somewhere. What they don't realise is how much danger they will be putting themselves into by dragging up the past.

Well... this is my first book by Robert Goddard. I've had the author recommended to me on several occasions, just not got aroud to him, which is a shame because this book was an excellent read. It's one of his more recent ones, written in 2005 I believe, which means there is quite an extensive back catalogue and a few books written since that as well. A good list is here on Fantastic Fiction: Robert Goddard's books. Judging by Sight Unseen, I suspect there are some excellent books among those titles.

The thing I liked about this one was how it wove two mystery storylines into one so seamlessly. Ie. the case of the missing child and who took her and the historical thread of who the 18th. century letter writer, Junius, was. He really did exist by the way. All the way through you're not only trying to work out who took the child, why was she taken, and was she dead... but you're also wondering what the connection is to Umber's studies of Junius. It's a fast moving plot so you need to keep your wits about you, a lot of characters to keep in your head as well: it can be a bit confusing. But the settings of Avebury and Jersey are interesting and well depicted, especially Avebury and the stone circle. He had the atmosphere there spot on.

There were two things that stopped me giving it a five on Goodreads... which I fully intended to do until about two thirds of the way through when it began to run out steam a bit, for me anyway. Perhaps it was me running out of steam, not the plot, but it seemed to lose its momentum a little. The other thing was that I never really felt I knew David Umber very well or perhaps I didn't really like him all that much, I'm not sure. I read somewhere that this can be a problem with Goddard's main characters. In the main though a fast moving plot, lots of twists and turns and some interesting historical detail made this a very good read.

I've not ever read anything by this author, but I've been vaguely aware of him. I like the sounds of this one, so I'll look and see if my library has a copy.

I don't know about that book but I have read books that seem to give the answers too soon and yet the book drags on for quite some time with no new revelations. This sounds pretty decent but I am reading one now that has too many characters in it and my one brain cell keeps saying "who is this?"... oh well , like you I am still liking the book lol

Kay: I hadn't read anything by him either even though he's quite well known in this country and several people had suggested his books to me. I now know he's worth reading.

Pat: I think you got it spot on there, they revealed the answer - or part of it - a bit early and after that it was only 'why' that we needed to know... so you just had to hang on. LOL

This sounds fascinating but also a bit sad. Imagine losing two children on one day! I do find reading about child deaths to be hard. Like you, I enjoy when two seemingly different storylines connect up in the end.