The Labours of Hercules

My tenth book for Bev's Vintage Mystery Cover Scavenger Hunt 2016 is The Labours of Hercules by Agatha Christie. It covers the category, 'Any other animal' (other than a cat or dog) as the cover shows a wild boar, deer, lion, horse etc. 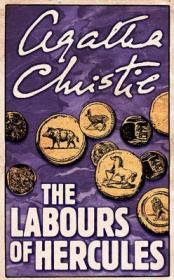 Poirot has decided to retire and grow marrows... or rather cultivate them to try and improve the flavour as he believes them to be very bland. (They are.) But first he decides to take on twelve cases which he wants to tie in with the Twelve Labours of Hercules. He's inspired to do this by a professer friend, Dr. Burton, who thinks Poirot has missed out on something by never having studied the Classics. Dr. Burton is bemused by Poirot's christian name:


So Poirot sets out to learn something about the twelve labours of Hercules by way of twelve last cases:

1. The Nemean Lion. A Pekinese dog is stolen and returned after a ranson of £200 is paid. The woman who owned the dog only told her husband about the incident after she'd paid the ransom. The husband, livid, wants his money back and calls Poirot in to help. Poirot discovers that this is not the first Pekinese this has happened to... Very nice twist at the end of this one.

2.The Lernean Hydra. A doctor asks Poirot for help. His wife has recently died and the village gossips have started to whisper that he might have poisoned her. Is there a way to put a stop to the rumours?

3. The Arcadian Deer. Poirot's car has broken down in the middle of nowhere. He finds a hotel for the night and is later visited by a young man who has been working on his car: he needs help. He wants Poirot to find a girl - a lady's maid - he met while he was doing some work at the local big house. She was staying there with a Russian ballet dancer but suddenly disappeared. Another one with a nice twist at the end.

4. The Erymanthian Boar. Poirot is in Switzerland. He takes a funicular railway to the top of a mountain where he becomes stranded with a group of people and embroiled in the capture of a killer.

5. The Augean Stables. A political story involving the covering up of the true personality of a former British PM. This one didn't really work for me.

6. The Stymphalean Birds. Harold Waring, who works in politics, is on holiday in one of the slavic countries. He takes up with a middle-aged woman and her married daughter but it seems the marriage is not a happy one and Harold becomes dangerously involved when it all goes pear shaped. Hercule Poirot only comes in towards the end of this one but it's a good story with a nice twist at the end.

7. The Cretan Bull. Diana Maberly visits Poirot because her fiance has broken off their engagement. He's told her that insanity runs in his family, that he too is going mad and that madmen should not marry. She doesn't believe it for a moment but what can Poirot do to help? A good one.

8. The Horses of Diomedes. A doctor friend calls Poirot in the middle of the night, asking him if he could come around to a neighbour of his. It seems she's been holding drug fueled parties and a young girl is in trouble. The dr. wants Poirot to find out where the drugs are coming from. Not my cup of tea this one.

9. The Girdle of Hyppolita. Poirot's been asked to go to France to look into a case of a stolen Rubens. Inspector Japp approaches him to look into another case while he's there - the case of a schoolgirl, disappearing from a train on the way to a new school in France. Nicely done, this one... another surprising ending.

10. The Flock of Geryon. Miss Carnaby, from the first story in this collection, The Nemean Lion, is back. She's bored and has an idea for an enquiry that she could help Poirot with. A friend of hers has joined a religious sect, and altered her will in favour of the charismatic leader. Several other women who did likewise are now dead, and Miss Carnaby is naturally worried for her friend. Poirot sends her off to join the sect. Good story.

11. The Apples of the Hesperides. A wealthy financier bought a gold chased goblet some years ago but it was stolen from the seller before he could take possession of it. The financier tasks Poirot with finding finding the goblet. Interesting... with a nice ending.

12. The Capture of Cerberus. Poirot comes across Countess Vera Rossakoff on the London Underground, a woman he'd had dealings with and admired twenty years ago. She now owns a new, popular nightclub in London and Poirot goes to see her. Later, Japp suggests that drug deals are going on in the nightclub and asks Poirot to investigate. Readable but not my favourite story by any means.

This was an absolutely delightful collection of short stories. I thought connecting them to the Twelve Labours of Hercules was ingenious... the Pekinese in the first story was the lion in The Nemean Lion, two odd women in the sixth story were the birds in The Stymphalian Birds and so on. Terribly clever. Naturally some stories are better than others, some worked very well for me, others a bit less. Personally, I really liked The Nemean Lion, The Stymphalian Birds, The Girdle of Hyppolita and The Flock of Geryon and several others were pretty good as well.

As always the vein of humour running through the entire book was joyous. It's so understated, just popped in, almost like a sleight of hand:

'He threw a glance of deep reproach at Miss Lemon. She did not notice it. She had begun to type. She typed with the speed and precision of a quick-firing tank'.

Can't you just see that? LOL! Wonderful. I'm such a convert to Agatha Christie and am having a lovely time cherry picking and sampling various books.

And talk about one book leading to another. I sent for a book about Greek myths because reading this one that deals with the twelve labours of Hercules has piqued my interest. I don't really know much about Greek lit. despite having taken it at O level when I was 17. (I failed it... the only exam I've ever failed, LOL!) Seems to me you're never too old to learn something new... or relearn something you should've paid more attention to in the first place.

Glad you liked this one - my favourite was The Nemean Lion too. I enjoyed the links between Poirot’s cases and the Labours of Hercules and also the personal snippets of information about Poirot, scattered throughout the text. The comparison between Poirot and the legendary Hercules is very amusing too. And Miss Lemon is priceless.

It made me want to know more about the myths as well - I have a book somewhere ...

You are ripping the books off quickly!!! I am glad for this one because I am not a big short story lover so I actually won't look this one up! But am always glad when you enjoy any book! Wilke next? *snort*

Margaret: I thought the whole idea and execution was incredibly clever. I too enjoyed the personal snippets. They must be the sort of thing David Suchet collected when he read the books in readiness for playing the part. Miss Lemon really is priceless but I do wonder if they had the right actress playing her in the series.

Laughing at you have a book of Greek myths *somewhere*... story of my life.

Pat: Well this book was quite a quick read and because it was short stories I read a couple, wrote about them, read a couple more.