Speaking Out: Lessons in Life and Politics - Ed Balls

I haven't been reading all that much this month... I have months like this sometimes where nothing I pick up seems to engage me and I'm distracted by other things. We had a lovely visitor from Memphis staying for instance and the half-term week, just gone, was *really* busy. So it turns out that here we are at the end of October and all I've read is two books! And reviewed none. Goodness me, I'd better put that right, so this is Speaking Out: Lessons in Life and Politics by Ed Balls. 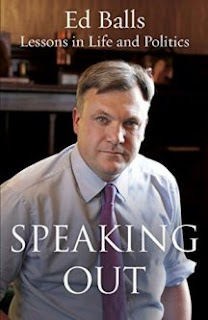 I don't know how well known Ed Balls is in the wider world but here in the UK he's a household name. For many years he was in politics, first as a political advisor and then as an MP himself for ten years. He was in the Labour cabinet as Secretary of State for Children, Schools and Families and then served as Shadow Chancellor from 2010 to 2015 when he lost his marginal seat in that year's general election.

I have to confess here that I was not much of a fan until recently. He came over in political interviews as rather too convinced that he was right and anyone thinking differently was wrong. But then politicians as a breed often do come over that way, hardly any of them wanting to listen to an opposite point of view, or answering the question put to them, not realising that the electorate would actually quite like to see them doing those things. So what changed my opinion of him? Well, two things did the deed - this book and the BBC TV series, Strictly Come Dancing.

Let's deal with the book first. It's written as a series of essays to his younger 27 year old self. Things he knows now which he wishes he knew then, sort of thing (which of us wouldn't like that?) The book is written in four sections: Learning who you are, Learning what works, Learning the hard way, Learning to move on. Each of these four parts is divided into chapter headings such as Loyalty, Family, Markets, Risks, Spin, Hinterland, Future and so on. So into these chapters is slotted everything you can think of, some family history, political goings on from his early days as a political advisor to Tony Blair and Gordon Brown, his time as an MP... right up to the Labour party defeat in 2015, and loads of opinions, interesting anecdotes and so on.

If I'm honest I found the nitty-gritty of his political years with Blair and Brown slightly less interesting than some of the personal stuff. Where the personal stuff was concerned I discovered that he is extremely protective of his family, especially his children, because in his opinion they did not decide to be in the public eye. All power to his elbow for that, in my opinion anyway. I also discovered that he has a stammer. Not the kind of stuttering stammer that's obvious, the kind where you can't get your words out, an 'internal' stammer. For someone who had to make speeches and give interviews that must've been horrendous and I gather at times 'was'. I had no idea he played piano, ran marathons for a charity called Whizz Kidz, enjoyed karaoke (Lord help us), loves reading. I *did* know about the football but am not sure how. You just wonder why it is that politicians hide behind some kind of barrier, not wanting the electorate to know they have another, more interesting, side to them? It's a real shame actually because this is one fascinating chap.

Some while ago I read a comment by the then Political Editor of the BBC, Nick Robinson. He said he thought that at some stage the public would have a complete reversal of opinion on Ed Balls. That they would come to see him in a different light as we now do Michael Portillo, for instance, who was also reviled as a politician but is now loved as a total railway geek in his excellent BBC railway programmes. I wonder if Nick Robinson had any idea that this reversal would come about as a result of the biggest show on British TV, Strictly Come Dancing? I bet if someone had suggested it he would laughed them out of the room. But it is so. Bonkers as it might seem, it is actually so. Millions are now watching Ed Balls, not speechifying at the dispatch box, but learning to dance with his pro partner, Katya Jones. I'll tell you it is electrifying. He's not by any means the best dancer, but nobody gives a damn because he's clearly loving it, trying and working very hard, and is by far the most entertaining celebrity in Strictly this year. His first dance, the waltz, was ok, not amazing but ok. Then he comes out in week two and does this:

He totally won me over with that and, despite all predictions to the contrary, is still in it and getting better by the week. It's joyous and I love it and so, apparently, do plenty of others who are voting in their thousands to keep him in the show. I actually hope he'll get to the final.

Anyway. I'll stop pontificating and just say that if you enjoy political books or are just interested in the current phenomenon that is Ed Balls, get this book and read it. You won't regret it.

What a fun review! I hadn't realized when you mentioned in from the dancing program that you were reading his book. It sounds like it was fairly good considering the political parts.. they usually read ok but s.l.o.w.

This one's not slow at all, Pat. He writes in a very readable way and I just whizzed through it. So much so, I don't think I took it all in and will probably reread it before the end of the year.

Well, you've convinced me to read his book. I'm loving watching him on Strictly. He is by far the most entertaining performer. I agree too about Michael Portillo - first on a programme where he lived with the children of a single mum - can't remember the name of the series and then on his railway programmes, he came over so well.

We went to a talk by Jeremy Paxman a couple of weeks ago - what a fascinating evening that was and I'll be reading his book, My Life in Questions, very soon.

Margaret: Very pleased I've convinced you to read this one. Well worth it in my opinion. You're completely right, he's the most entertaining performer, plus he's the one who's had the most to learn and I think people like to see someone progressing rather than being brilliant to start off with. Yes, I watched the doc. with Michael Portillo living with a family too. Very touching indeed and I too started to like him from then.

Would *love* to see Jeremy Paxman speak! Very envious indeed. His book is going on my Christmas list.

Somehow I missed this book coming out, so thanks for highlighting it! Loving him on Strictly, though I have to admit he's one of the politicians I liked most anyway - he always struck me as both intelligent and sincere. I'm also a fan of his wife Yvette Cooper as a politician, and I've always loved the way they support each other and share their family responsibilities.

The other one who changed our opinions by appearing on Strictly was Ann Widdecombe - what a hoot she turned out to be! Not to mention the political journalist John Sergeant. I love all of them more than the gorgeous and talented young actors and actresses, to be honest.

Fictionfanblog: My pleasure... so pleased to have brought it to your attention. So many people are loving him on Strictly, I do hope he realises how much the nation has taken him to their hearts.

Same here about Ann Widdecombe... her autobiography is very good too by the way. I'm simply not interested in all the young talent on the show. I'm sure they're very good and all that but they don't do it for me... I want somebody with a personality.

This was a fun post, Cath. I don't know anything about Ed Balls, but I love that he is doing that dancing show and loved watching the video.

I quite agree it is a fun post and the dance really made me smile !

Tracy: Glad you enjoyed this post. No, I wouldn't expect you to have heard of him as our minor politicians don't tend to be known across the pond. He teaches at Harvard occasionally so might be known there but not generally in the US.

Val: It's crazy... he's still in Strictly but now there are people saying he should resign because other better dancers are going out. Only in the UK would you get this attitude of someone doing *too* well, being too popular, and attracting this kind of nastiness. So sad.