Yet again another busy month with family committments, so very little reading done. Just two books so far this month, neither of which I've managed to review so will do a couple of mini reviews to catch up. First, Holy Island by L.J. Ross. 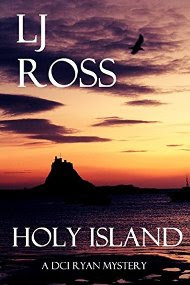 DCI Ryan is on three month's sabbatical on Holy Island (Lindisfarne) after a particularly nasty case. He has almost recovered when the body of a young woman is discovered in the ruins of The Priory by a woman walking her dog. Ryan is called upon to help secure the crime scene and, eventually, put on the case. Dr Anna Taylor, who is originally from the island, is brought in as a consultant on pagan rituals as it seems the dead girl has been killed and laid out in a ritualistic manner. She instantly clashes with Ryan, and not helping is the amount of baggage she's carrying in respect of her personal family history on the island. Ryan does not want Anna on the case but when another body is discovered, also ritually killed, it seems he might not have a choice in the matter.

Well, I enjoyed this well enough... liked it, didn't love it, not sure why, sort of thing. The writing is certainly good enough, the sense of place is quite strong - even though I haven't been to Lindisfarne I felt as though I had. I think what didn't work for me was the romance between Ryan and Anna. Ordinarily I've no objection at all to romantic entanglements in whatever I read but this felt a bit contrived, very Mills and Boon, and thus unrealistic because people don't go on that way any more. And yes, I have read my fair share of Mills and Boon books in years gone by, especially Regency romances. But sticking that sort of confrontational relationship into a serious murder investigation just didn't work for me somehow. Shame, but there you go. I also found other elements of the story far-fetched but can't go into that as it would involve spoilers. I have say though that the crime element was well done, kept me reading to the end, and I didn't guess the outcome, so that is definitely a plus. There are four or five in this series and I gather they're quite popular. I don't think they're for me but they do well on Goodreads and are not dear if you have a Kindle, so for some they might be worth a try.

Next, a non-fiction book, Making It Up As I Go Along: Notes from a small woman by Marion Keyes. 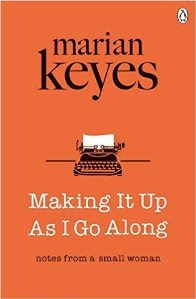 Marion Keyes is a well known author of contemporary fiction with about twenty books under her belt. As well as fiction she writes columns for magazines and this collection of essays is mostly taken from those, interspersed with some previously unpublished material. The essays are divided into various sections, so we have (Bad) Health and Beauty, On My Travels, Marian Meets, Soul Searching and so on. What shines through is Marian's sense of humour. I've seen her on the Friday Panel on Strictly Come Dancing's 'It Takes Two', so I know she has the most wonderful Irish brogue and is naturally very funny. I was saddened to hear that she suffers so much with mental health issues, but not surprised as you often find that people who're funny and seem confident are, in reality, just the opposite. Some sections appealed to me more than others. I'm not a girly, make-up sort of a person so the Heath and Beauty section was less interesting to me than say, On My Travels. In that section she travels all over the world so that would appeal to me, a real armchair travel fiend. Her diary of her time in Antarctica was, for me, some of the best writing in the book, really fascinating. It's very easy to identify with a lot of what Marion writes about, a dislike of parties, going mad on Twitter (I don't do it these days but have in the past), crushes on celebrities (she's famously mad about Pasha on Strictly Come Dancing but there are many others) and so on. And even when you don't identify, the subject is always interesting to read about and always amusing. I can't recommend this book of essays highly enough. I nabbed mine in Morrisons for £4... the best £4 I've spent in ages. It reminded me of another simlilar volume, The Chain of Curiosity by Sandi Toksvig. If you like essays, buy that and Marian Keye's book, you won't be disappointed.

two books is two more then I have read. my reading has come to a screeching halt . I've tried two books but my interest isn't there so I am giving it a rest. It sounds like you are in a spot of , "oh, they are ok".. I hope you find better reading with the next book

Nice to see you back on the blog, Cath. I've been wondering how you are. I hope life gets more relaxing for you - but as Christmas is approaching fast, maybe that's too much to hope ...

Shame about Holy Island. I had high hopes when I read about the setting - it's one of my favourite places (not very far from where we live) but a Mills and Boon type romance is really not what I like to read. Still, if the library has a copy I'll at least take a look at it.

The Marian Keyes book looks interesting, like you I've seen her on ITT and think she is very funny, so again if I see it in the library I'll pick it up.

I have one of Maran Keyes' novels, but it has disappeared into my TBR piles and I cannot locate it. Someday it will surface and I will read it.

Glad to see you back blogging. Hope your next read wows you!

Pat: Your life's been turned upside down so it's no wonder you're not reading at the moment. *Sending huge hugs*

Thanks, Margaret! Just very busy. My daughter had her bathroon renovated and was due to stay 3 or 4 days... it turned into 9. No problem but 2 extra people in the house does cut down on reading time a bit.

Holy Island would be fine as a library book. The Marian Keyes book was *very* enjoyable.

Tracy: I tried to read one of her novels once and didn't get very far. Think I prefer her non-fiction writing.