The Singing Sands by Josephine Tey is my book 22 for Bev's Mount TBR 2016 and my 11th. book for her Vintage Mystery Cover Scavanger Hunt covering the category, A Body of Water. 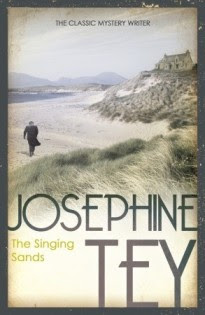 Detective Inspector Alan Grant has been suffering from bad attacks of claustrophobia, so much so that he's been given a leave of absence. He heads to Scotland to stay with his cousin and her family for a few weeks. As the train pulls in to his destination he passes a compartment where the dead body of a young man is just being discovered. Alan inadvertantly picks up a newspaper belonging to the dead man and later discovers a poem he had started in the margins. Intrigued, Alan can't help himself, he has to find out more about who the young man was.

The death is declared an accident, the man had fallen while drunk and hit his head. He was one, Charles Martin, and apparently French. For some inexplicable reason, Alan Grant doesn't believe a word of it. He's supposed to be recovering from an illness, taking it easy, fishing, relaxing, but he can't. Something is just not right about this incident. The trail leads him to an island in The Hebrides to find 'the singing sands' in the poem written by a dead man and thus on to a discovery he could never have imagined in his wildest dreams.

I'm so sorry that this is the last Alan Grant book - I've loved them all, although my favourite was The Franchise Affair. The Singing Sands had a wonderful sense of place, the Highlands of Scotland, absolutely one of my favourite 'places' of all. Alan Grant on holiday was a joy. I loved his cousin, Laura, and her husband, and son, Pat... with his Scottish accent that no one can understand, hero worshipping Alan. Delightful. Poor Alan though is suffering from a bad dose of claustophobia and this is very well depicted. He suffers agonies on the train journey for instance as he forces himself not to open his carriage door during the night. Car journeys are a particular trial and one scene where he has to force himself not to ask the driver to stop and let him out is particularly affective and well written.

The thing that made this story for me though was the investigation. It was fascinating to follow Alan as he made painstaking progress with his inquiries, never giving up even though many of them led nowhere. This is not a hard-hitting, serial killer sort of a crime yarn, it's a gentle, intellectual exercise as one clue after another is followed up and either discounted or added to the stockpile of information. Where it all eventually led was completely unexpected... not the kind of thing I've ever seen in a crime story before. Huge fun.

As I said, it's a shame this is the last Alan Grant book. Josephine Tey only wrote six in the series, this last one published the year of her death in 1952, she was only 56. I still have a stand alone, Brat Farrar, to read and a couple of others that I don't own. What a class act she was as a writer, one of my favourites now, several of her books I will definitely reread.

I just bought The Man in the Queue for my kindle. Thank you!

This sounds like you really enjoyed it. The review you wrote makes it sound very good.. I may have to check it out . But at the moment my reading has come to a screeching halt . I can't seem to get my mind wrapped up in what I read.
Sooner or later, I hope, it will come back.

I can still picture a lot of the scenes from the book ..it's a good one isn't it!
you still have Bratt farrar ..you are in for a treat (When you're read it try Mary Stewart's The Ivy Tree (if you haven't read it already :o)

you've ...I need to wear my reading glasses ...sorry

Nan: I hope you enjoy it. The better books are a bit further on in my opinion... I have a feeling you would really like The Franchise Affair and To Love and Be Wise.

Pat: It had a lovely Scottish feel to it that I think you would love. You have good reasons not to be able to concentrate on books at the moment. *Hugs*

Val: Nice to see you around. Yes, it was lovely. Made me long even more to see the Hebridean islands. Get Hubby's 2nd. knee op done in January then who knows? :-)

I'm probably going to do the SCottish challenge next year so will keep Bratt Farrar for that, JT being a Scottish author. I've read a few Mary Stewarts but not that one. I may even have that on my Nook as I did grab several of hers for it. Just had a look at it on Goodreads... it sounds rather good.

I'm glad you enjoyed it, Cath. I have a few of Tey's books to read yet, including this one. I think it will have to be next year though - I have books stacked up to be read (when is it any different?)

I intended to reread all of Tey's books this year but just didn't get to them. This is a reminder of how good they are!

Margaret: So nice that you still have a few of her books left to read. She wrote all too few, which is a shame. LOL... yes... me too and then I can't find anything to read!

Kristen: Well, there's always next year. :-) She's one of my favourite authors now.

It's a shame the Tey died so young! I didn't know this and am glad you noted it. I feel badly because in a writer's mid-50s, she is really at the height of her powers, if you will. I'm going to put these on my list.
Judith (Reader in the Wilderness)

Judith: It's a terrible shame as she was really just getting into her stride with Alan Grant. Several of her books, The Franchise Affair, To Love and Be Wise and the standalone, Miss Pym Disposes, were really top notch.

I am almost finished with the first one, and have bought the second. I love the slow pace, the way Grant thinks, the way everything isn't necessarily as it seems.

I DO need to read this series, Cath, and am wondering if this one stands enough on its own to read it first.

Nan: Glad you enjoyed the first well enough to buy the second. They get better as they go on in my opinion. And they're 'quiet' mysteries... contemplative.

Penny: Yes, it can easily stand alone... I think most of the series can as there is never a great deal of detail about Grant's personal life, so no ongoing background story.

Thanks, Cath. I'll be looking for this,