Death on the Cherwell

It seems I can't resist these lovely BLCC books. Each and every one is so beautifully presented, a delight to read, and I love the nostalgia of them. Even though many of them were written in the 1930s and 40s, before I was born, things hadn't changed much come the 50s and 60s when I was around, so they take me back to a time when modern life was not as frantic as it is today. I love them to bits. Today's review is Death on the Cherwell by Mavis Doriel Hay. 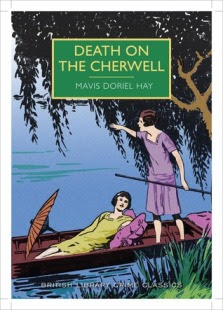 The first meeting of The Lode League takes place on the roof of a boathouse somewhere on the river Cherwell, in Oxford, on a gloomy February afternoon. Four girls, Sally, Daphne, Gwyneth and Nina have formed a society for the express purpose of cursing the bursar of their Oxford college, Miss Denning. Except that proceedings hardly have a chance to get underway before a canoe floats into sight and lying in it is, shockingly, the dead body of the said Miss Denning. The girls all attend Persephone college, an Oxford women only college, and this kind of scandal is not at all welcome to The Principal, Miss Cordell or 'Cordial' as the girls call her.

The police, of course, begin investigations but, worried that knowledge of The Lode League might cause the police to think they had something to do with the murder, the girls decide to investigate for themselves. It seems there are two main suspects - the elderly owner of a large house who has crossed swords with Miss Denning over a right of way across his land, and a farmer who wanted to sell the college some land but the deal doesn't interest them. A fellow student, from Yugo-slavia aslo seems implicated by her rather erratic behaviour.

The case is further complicated by the secretiveness of Miss Denning's life. She has a niece that she seems determined to keep away from Oxford at all costs. Why? Sally's sister and husband, who solved a previous murder case on the underground in London (Murder Underground), arrive to help solve the puzzle. It's a tricky one and no mistake, one in which the police appear quite happy to allow the undergraduate group to help solve.

Muriel Doriel Gray wrote only three crime novels, one of which I've read and enjoyed, The Santa Klaus Murder. (The other is Murder Underground which I've not read.) It seems a shame that she didn't write more as this was a very enjoyable read.

I quite enjoy books set in schools or colleges and there aren't that many of them so I always appreciate finding new ones. (One I can highly recommend is Miss Pym Disposes by Josephine Tey.) The girls in this book are thoroughly Jolly Hockey Sticks and none the worse for that. I wasn't sure of ages but imagine they're eighteen to nineteen... but seeming younger as of course back in those days children matured much later into adults. It wasn't until one of them was driving a car that I was brought up short and realised how old these girls were. Before that it was almost like reading an Enid Blyton book for mid-teens. Huge fun, to be honest. There's a nice vein of humour running through the whole thing, I found myself chuckling quite a lot, not only at the dialogue but also at the antics of the girls themselves. I liked how the detective in charge enjoyed their enthusiasm and found ways for them to help.

The mystery itself, of who killed The Bursar, was solid... various secrets to discover and various blind alleys you're led up. I didn't know until the end who'd 'dun it', so to speak, though some of the details are easy to guess if you read a lot of this sort of thing. To be honest, the real joy of this book is the river and college setting and 1930s period detail.

In all, a thoroughly enjoyable BLCC book. I have heaps more - around ten - to read and heaps more that I would love to own. They're all much too tempting!

I love that you love the "older" books so much.. "I" was around in the 40's but sure don't remember anything! lol..

Me too, Cath! I adore these books!

ha ha ..you're adding to my list again.
I too enjoy the feel of these type of books it's a more relaxing world to immerse myself in .(Although I'm sure at the time it actually was just as stressful in reality)
Lovely review ..you strike that nice balance of enough information to make a decision but not too much to spoil the read. Thanks Cath

Pat: I like reading about when life was less complicated, people enjoyed simple pleasures without all the technology we have today.

Peggy Ann: I think there are quite a few of us enjoy these classic crime books.

Val: Heehee... sorry. Yes, I'm sure they had their stressy stuff too, not the least watching Hitler come to power.

I don't read a lot of crime, but I've got several of these BLCC books and haven't come across a bad one yet. I enjoyed Death on the Cherwell, and thought your review was spot-on. Like you, I liked the descriptions of college life and the 30s detail, and I thought the girls were very believable. And I didn't guess who the killer was, which is always a bonus! I've read Murder Underground, and enjoyed that too - again, the period detail is lovely. Do read it!

Christine: I haven't come across a bad one either. One of the reasons I like these books so much is for the snapshot of life as it was in the 1930s, 40s and 50s. I know it's easy to romanticise those days but it does seem as though it was less frantic and materialistic. We've lost something with all the 'progress'. Thank you, I shall definitely try to get hold of a copy of Murder Underground.