Quite a few new books have mysteriously found their way into the house. I wonder where they're coming from... *coughs* So I thought I'd do a post as I haven't done one in quite a while. I have to say, some super, super covers on display here. Publishers seem to be really going out of their way these days to make books very attractive so well done them.

Anyhoo... these are the books bought, or given to me, or even *free*, over the last couple of months. 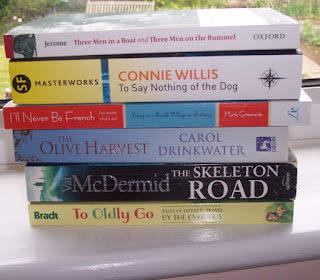 To Oldly Go: Tales of Intrepid Travel by the Over 60s, Can't find an editor for this but basically the title says it all. Birthday present.

The Skeleton Road by Val McDermid. Scottish crime. Haven't read anything by this author, time I did. This one was free as Tiverton is having its literary weekend and a local shop is doing a book swap event. I took a load and came away with two.

I'll never be French (no matter what I do) by Mark Greenside. My France thing continues unabated...

Three Men on a Boat & Three Men on the Bummel by Jerome K Jerome. I have actually read these but don't own them. Then I saw this copy advertised on Twitter and literally bought it for the cover. See it properly below. 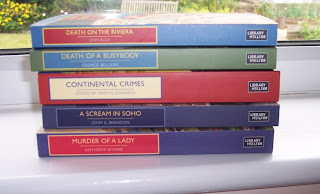 A Scream in Soho by John G. Brandon. Another BLCC. London during WW2. Looks good. Another birthday pressie.

Death of a Busybody by George Bellairs. Village based crime yarn, coveted this for a while because of the cover so when I saw it in Smiths... (Fully paid up member of Sucker-for-a-lovely-cover-anonymous.)

Death on the Riviera by John Bude. Crime story set in the south of France.

And because the covers are too nice not to see, here they all are: 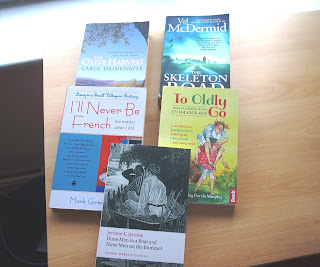 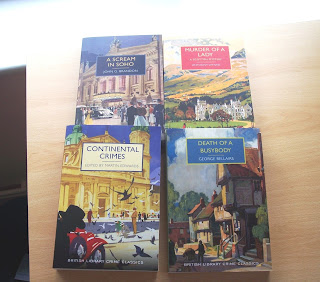 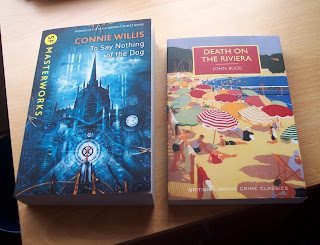 Goodness! you certainly have some nice "new" stuff to read!! I still haven't gotten anywhere near my usual reading, I miss it but keep feeling to exhausted to read. When I do read, after only a few pages, I can feel myself getting sleepy. Ever since that sinus thing..oh well. Enjoy your new books!!

I am so fond of Three Men... Never grows stale. A little like DIary of a Nobody. I always find something fun and new. I'm interested in the 'Oldly' book.

Pat: Yeah... I'm busy doing a TBR challenge but adding more books to the tbr pile than I'm actually getting rid of. LOL

Nan: Yes, Three Men is a wonderful book. Think I've read it twice, but years ago so it should read almost as a new book. I remember reading a biography of JKJ years ago too, he lead a very interesting life. A couple of real life ghost experiences which set me on the road to my love Victorian and Edwardian ghost stories. I read Diary of a Nobody years ago too and can't remember much about it. Time for a reread perhaps.

I reckon the Oldy book should be quite good. I will report back.