Having already enjoyed two of the three books in Peter May's 'Lewis' trilogy, I spotted book one of his Enzo McCleod series in the library and thought I'd give that a go too. 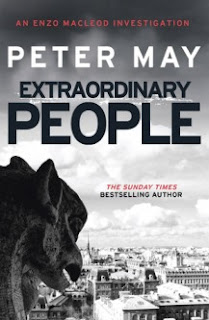 A Scot living in Toulouse in the south west of France, Enzo McCleod is a biologist at the university in the historical city. He's taken a bet with a colleague that he can solve a cold case murder which is over ten years old, using modern techniques. Jacques Gaillard was a brilliant professor, destined for high places, when he disappeared off the face of the Earth. No one has any clue what happened to him and the police seemed to have lost interest in the case pretty quickly.

Enzo joins forces with journalist, Roger Raffin, who has investigated various cold cases and has copious notes which he's only reluctantly willing to share. Then a metal box is discovered in the catacombs below Paris after a tunnel collapse, which turns out to hold the skull of the missing man. Also in the box are various bits and pieces, clues perhaps to the whereabouts of the rest of skeleton? They piece together a theory and the hunt begins for the next box, neither of the men having any idea what they are getting themselves into or the danger which will present itself both to themsleves and to Enzo's family.

Well, I whizzed through this like a bat out of hell... unable to put it down unless someone was actually dying. Peter May has written this book for people who like puzzling things out, searching for answers in obscure records or books via the internet, gathering clues and figuring out the answers. And it works, or it did for me. I thoroughly enjoyed Enzo's tour of France, dragging along sundry companions, getting into a spot of bother at every turn, it was, to coin an over-used term, a real roller-coaster ride.

Enzo himself is a pony-tailed, middle-aged Scot with personal problems. He has two daughters by different mothers, one of whom won't have anything to do with him... he lives with the other who has a boyfriend Enzo doesn't approve of. I don't always care for these back stories of detectives in mystery books but this one struck a chord with me so I had no problem with it. And I did actually like him for recognising his own flaws and understanding why he had such problems in the first place.

One of my 'likes' shall we say, in books is 'tunnelling underground'... any books which go underground and do it well get the thumbs up from me. And this does just that. The last few chapters feature The Paris Catacombs, (which I was, rather stupidly, completely unaware of) and it is creepy and frightening. I'm assuming most of the info in the book is true and of course now I'd like to know a bit more! Maybe I can find a book in English as my French is not quite good enough for reading a text book I suspect.

As to the final culprit, it wasn't a surprise as I'd already guessed but that was not a problem at all. The joy of this book is in the journey and in that respect it was a hugely fun experience. I shall definitely read more in this series.

Extraordinary People is my book 2 (lagging behine a bit with this reading challenge) for Peggy's Read Scotland 2017, because Peter May is a Scottish author.

ohhh... dang. Peter May. I do like his writing. But for reason I don't understand when I read a cover and it says any country but England, Scotland or Ireland I put it down. I'm bad, I know. sigh. Glad you enjoyed this one. Is it a trilogy? heh.

Oh, my, this sounds like one calling after me. It could be I just interviewed a most engaging man, named Enzo, for a project I'm involved. This is now on my TBR list. Much thanks.

Like you, I have only Book Three of the Lewis Trilogy to gobble up, The Chess Man, or is it The Chessman. I think the former, but I'm not sure.
In any case, I'm so happy that you liked this one. That will soothe me when I do finally finish The Lewis Trilogy.

I was reading your brilliant review thinking I really must read more of May's books (loved his Lewis trilogy) when I remembered that I have some of his books on my TBR shelves. And when I checked I have this book and the 2nd Enzo book as well! I wish I could read books as I buy them and not leave them for later - I always seem to be catching up - ah well, lots to look forward to.

Pat: Well, we all have our favourite countries to read about. LOL Mine vary from year to year, I never would have thought I'd want to read a lot about France but here I am doing just that. No, it's not a trilogy... there are already six books in the series! LOL!

Penny: How strange that you just interviewed someone called Enzso. In this book it was short for Lorenzo.

Judith: It's The Chessmen and is apparently very good indeed. I loved the 2nd. instalment, The Lewis Man. My husband has enjoyed a couple of his standalones too.

Margaret: How funny that you have books one and two of this series. You'll get to them and can be sure of an engaging read.