Friday the Rabbi Slept Late by Harry Kemelman is my first book for the What's In A Name 2019 challenge, which is being hosted by The Carolina Book Nook, covering the category, 'A Month or Day of the Week'.

It's also my first book for Bev's Mount TBR 2019 challenge and my second for her Calendar of Crime challenge covering the February category of 'A book title starting with 'F'. 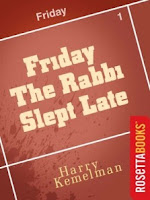 The town of Barnard's Crossing in Massachusetts has its first rabbi: David Small. He's been there for almost a year but isn't popular with all in the Jewish community. Some feel that their rabbi should be outgoing, larger than life, but Small is quiet, introspective, bookish. There's talk of not renewing his contract but the board that deals with these things is very much split.

No one is prepared though for The Rabbi to come under suspicion for murder. The body of a young woman is found in the car-park of the syngogue. Then her purse is found in the rabbi's car which had been parked there overnight because he'd decided to walk instead of drive home late that night. The chief of police, Lannigan, doesn't really feel that David has murdered the girl but has to investigate properly. The girl, Elspeth Bleech, was a live-in mother's help who apparently had few friends and certainly no male friends. So how come she was pregnant?

I have Nan at Letters From a Hill Farm to thank for this recommendation. In fact she recommended the series years ago but I never did get around to it even though I'd downloaded this first book to my Nook. Anyway, finally I got to it and wasn't disappointed.

It's a bit of a slow-burner, Harry Kemelman takes the time to set the scene, tell us about some of the people who make up the Jewish community in Barnard's Crossing, focus a bit on the main protagonists, especially Rabbi David Small, and I liked that. It's nice to read a book that is not in a tearing haste to get to the murder or whatever else is the central theme of the story. I personally found the details about the Jewish religion fascinating. I had no idea it was so different to Christianity or that rabbis really are *not* the Jewish version of a priest or vicar. I love it when books teach me things like this.

David Small is such a multi-faceted character. I love how under-stated the author has made him, 'other-worldly' almost in his bookishness... 'away with the fairies' we used to say. But that doesn't mean he isn't sharp when it comes to investigating a murder. He doesn't actually do that much of that in this first book, that's left to Chief Lannigan, but the two men co-operate and share ideas and I liked what their relationship became, I hope that continues in subsequent books because, yes, I will certainly be reading more.

And Friday the Rabbi Slept Late also gives me a book for Massachusetts in my ongoing (since 2011!) personal challenge to read a book set in every American state.

I don't usually read mysteries or murder stories, but this one actually sounds kinda interesting to me. Perhaps because I am such a Chaim Potok fan, and it would be nice to read another author steeped in Judaism. I'm not very familiar with it, but the details I read in Potok's stories fascinated me.

Only Jan 9 and you are rolling along a jet speed! lol. A few used books have showed up at my place this new year.. sigh.. I can't figure out why I do this when I have so many tbr books here already!! Being a slow reader doesn't help! gah!

I'm fairly certain that I read a book or two in this series way, way back. In those days where I didn't keep track (so pre-1993) and when I just picked up what was available on the library shelves. I'm going to think about adding this one to my list.

I've been immersed in a WWII saga written by Herman Wouk. I read the two books that comprise it in the '80's in print, but I've been doing a read/listen combo for a book group session I'm moderating next week. Finally think I'll make it to the end. Whew! Anyway, as Mr. Wouk was a naval officer and is also Jewish, he took a very comprehensive look at the whole conflict from many points of view. And he's 103 now. Can you believe? Anyway, I've learned a lot and the info you mentioned about the Rabbi is quite interesting to me right now. Back to reading...

Jeane, I too was fascinated by the details of the Jewish religion. I'd like to learn more so will look up Chaim Potok as I'm not not sure who that is. Will definitely look for some non-fiction too.

Pat, well the Anne Perry was a short book and this one I read on my Nook which always goes quicker for me, possibly because you can choose a font size to suit you.

Kay: Ah yes, abck in Days of Yore, LOL, I have books like that too and can't help but wish I'd always kept note of what I read.

I'll look out for your thoughts on the HW book as I'm rather interested. Maybe this will be my subject for 2019? (2018 was The Balkans, 2016 & 17, France.) I have already read a bit about the Jews in WW2 but I'd like to know more in a more general way about the religion. The info about rabbis was completely new to me and there's the potential with this Rabbi Small series to learn a lot I suspect. My recent read of A Song of Shadows by John Connolly dealt with the subject of the Nazis who ran the concentration camps who escaped to live in New England after the war. Fascinating, but his books are not for everyone.

I am glad you liked this book, Cath. My enjoyment of this series is more related to learning about the Jewish religion than the mystery. And I do like Rabbi Small's character a lot. I have some other series with Jewish characters that I am interested in but I don't think any of them get so much into the religion and daily life.

I read so many reviews where folks complain about slow burner story lines, but like yourself, I actually enjoy them, if they are done well!

When I sat and thought about it, I was quite surprised that I don't really enjoy non-fiction reading very much, as those are generally story lines which rely on the steady pace of reveal, rather than a story line which comes to a head with a bang!

As this is the first book in the series, I am tempted to give it a try, especially as Jeane and yourself have already had me scurrying away to check out Chaim Potok and finding another author to add to my list!

Thanks for sharing, I hope that you are both feeling much better now and well enough to enjoy your weekend :)

Potok is one of my favorite authors, sadly no longer with us- he is a master of understatement. His most famous novels, The Chosen and The Promise, are very good. I am also very fond of Davita's Harp (about the Jewish daughter of communists living in America) and My Name is Asher Lev (about a young artist who struggles with balancing his religious beliefs with his need to make art)

Tracy: My enjoyment of it was definitely more to do with what I learnt than the murder though that was good too. Looking into reading book 2 soon.

Yvonne: As long as I know a book is a bit of a slow burner I'm fine with it. I knew it was because I'd checked a few reviews on Goodreads... such a useful tool. I've been there to look at Chaim Potok too, this is an author I had *never* heard of. Why? It never ceases to amaze me that I, who thinks they know a little bit about books, am still coming across so many authors that are completely new to me.

Yes thanks, we are at long last starting to feel better.

Jeane: Thanks for the info on Chaim Potok. I was wondering which were the best ones to try and plumped for Davita's Harp, funnily enough, as I thought it sounded interesting.

They are all pretty much "slow burners"! And I'm sure there is way too much Jewish information to please a lot of readers, but I just eat them up. I feel like I have a great college professor in Kemelman, which he actually was. And he and I both graduated from the same University with the same BA degree! That pleases me no end. I am a born student so I guess I am the perfect reader for his books. I was also fascinated to learn how very different Judaism is from Christianity. It makes me smile that you read this. Just great, Cath.

I read several books by Chaim Potok, probably around the time they were published. I remember specifically The Chosen and My Name Is Asher Lev. I liked the books a lot and sought out his books, but that is about all I remember.

Hope you will read Anne Tyler when you get to Baltimore state!

Nan: And that's absolutely fine. I'm increasingly a slow burner book sort of a person to be honest. Like you I'm a born student and worry that I won't live long enough to know everything that I want to know. I'm glad I made you smile.

Tracy: I can't believe I had never heard of Chaim Potok! My county library catalogue has three of his books to reserve and I'll be doing that at some stage.

Nicola: We were in Baltimore in 2005, it's a city not a state, but I could read Anne Tyler for Maryland. What would you recommend?

Hi Cath,
I am sooo far behind with this series.
It's really interesting--when I was a girl every adult I knew was reading or had read books in this series (1960s). But what I didn't know until Nan's post about the book is that the author is a Boston area native. No wonder everyone in my suburb west of Boston was reading it. So now it will be like going home to read at least Friday the Rabbi Slept Late. It's on my list at least.

Judith: How funny that when you were a girl the Rabbi books were so popular. I love that. I have the next one lined up, Saturday the Rabbi Went Hungry, to read this month. There are 12 so I *could* read one a month.