My first book of 2019 is A Christmas Secret by Anne Perry. This is my first book for Bev's Calendar of Crime reading challenge. It covers the January category of 'Month-related item on the cover'... and qualifies because there is a small village snow-scene acting as a Christmas tag on the cover. 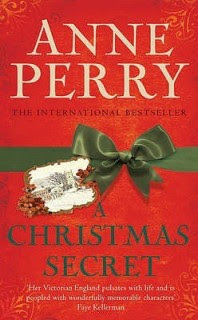 The Reverand Dominic Corde and his wife, Clarice, have been sent to the village of Cottisham, in Hertfordshire, eleven days before one Christmas in the mid-1800s. He is to fill in for Reverand Wynter who has gone off on a much needed break. They immediately fall in love with the olde worlde village, very different to the London parish where Dominic was curate to a mean spirited vicar. But despite the beauty of the village something's not right. The local villagers appear guarded. There're clearly secrets but what Clarice wonders is whether or not the Rev Wynter knew of these and what they were. And something else... where is he? Where exactly has the vicar gone on this 'much needed break'? No one seems to know...

Well anyone who has two brain cells to rub together will guess where the vicar is but my lips are sealed. The best thing about this story and the reason I gave it four stars on Goodreads was the absolutely superb snowy, wintery, 'cut off from civilisation', atmosphere depicted in it. It reminded me very strongly of Three Pines in Louise Penny's superb Armand Gamache series. It was beautifully portrayed and I loved it.

The mystery itself was a bit more pedestrian, but I liked Clarice and that she had bags of personality, curiosity and drive. There was a nice twist at the end which I didn't guess, so that was good. To be honest, I don't require a lot from a Christmas mystery, it's not intended to be improving and nor do I need it to be at the beginning of the year when there's a lot going on. The author, Anne Perry, famous for her Victorian Charlotte and Thomas Pitt and William Monk series, has written sixteen Christmas novelas and I've enjoyed those I've read. She doesn't hesitate to use elderly ladies as heroines which makes a refreshing change from fiesty, teenage, young things in a lot of other books. Good fun, wonderful setting, easy, undemanding read.

I like this author having read A Christmas Revelation by her recently.

Pat: Yeah sorry, you won't know where the vicar is... (you really will not be surprised if you read this one LOL!)

Diane: I can't remember if I've read that one or not, maybe, I've read quite a few now and think they're charming. I don't think I have as I checked on Goodreads and it's the latest one so I'm sure I haven't... sounds good!

I've read several of Perry's Christmas book and I've liked them. It seems to me that she often features characters from her other series that may be lesser known or have a smaller part. I like that.

Kay: Apparently she does but I haven't read enough of her novels to confirm it properly, just the first 2 or 3 Charlotte and Thomas Pitt books, and those an absolute age ago now.

Hi Cath,
I'm not familiar with this volume of Anne Perry's Christmas mysteries. I'll put it on my list for much, much later this year. Sounds interesting!

Sometimes those are just the perfect kind of read!

Judith: It was quite a good one... one to keep in mind for next December, you'll be amazed how quickly we'll get there. (Scary?)

Nan: Yes, exactly. I've been ill since the new year with this bug that's been going
around so easy reads are just perfect at the moment.