It's been gardening weather for the last week, so I've been reading a bit less than usual. A tricky jigsaw puzzle has also been taking up my time, but that's the way it goes sometimes and I don't stress over it. It's nice to spend your spare time doing what you fancy rather than what you feel obliged to do. So I've read five books this month, slightly less than normal, but that's ok, next month I may read more. Or less. Or exactly the same number. Who knows!

Anyway, these are they:

15. The Dancer at the Gai-Moulin - Georges Simenon

16. New Europe - Michael Palin. A trip around the ex-iron curtain countries in 2008 by the intrepid maker of travel documentaries, Michael Palin. I enjoyed the TV series very much but found the book dragged a bit. It was saved by his exquisite writing, he has wonderful descriptive powers and a very amusing way of expressing himself on paper. I laughed quite a lot.

17. City of the Lost - Kelly Armstrong


Favourite book of the five would probably be:

Weekend at Thrackley by Alan Melville was beautifully written, funny and clever. You can't ask for more than that.

The two books I'm reading at the moment are:

The first is quite long, the second rather harrowing, so they're taking me a while to get through. When I've finished them - hopefully this week - I shall move on to one of these: 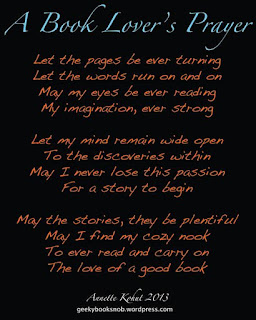 You sure are moving along! Could you even imagine only having 2 or 3 books to choose from? lol

I love that poem too - I've never come across it before! I've been doing just a little gardening, mainly mowing and tidying, lots of reading, not much writing about what I've read, but as you say that's the way it goes sometimes. Hope you had a great Mother's Day - we spent it with the family and had a lovely time with our grandchildren.

You are another dark horse when it comes to declaring exactly how many books you manage to read in a month (I was earlier berating Kelly for exactly the same thing). I can't see myself even contemplating a monthly wrap-up post anytime soon, so sparse would it be, although I enjoy the books I do manage to get through!

The poem is lovely and I also agree with your book of the month choice, although I have to say that I would need to be very selective with Alan Melville's titles I chose to read, as some simply didn't appeal to me at all!

I'm not really into the realms of fantasy stories, so although I find the premise of 'The Toy Makers' quite intriguing, as I do some of the author's other titles, I shall probably wait to see what you think of it, seeing as you are reading it right now.

I also admire that you can read more than one book at a time. I have to give my full attention to one story at a time, without distraction, although I will generally have the next book on my list lined up and ready to go just as soon as the previous one is finished with.

I still also really yearn to at least try the 'Maisie Dobbs' series, so I was immediately drawn to that one from your next group of 'To Reads'.

Have a great April and I hope that the garden can be enjoyed some time during the month :)

Hi Cath,
Your April reading looks wonderfully adventurous, as in armchair travelling.
I'll look forward to hearing your thoughts about them.
I'm so glad you've had a good month for puttering in the garden. Oh, I do so long for flowers. We have six weeks to go for even the early ones, unless, of course we have a sudden warming event, as we had in 2012.

And, Cath, Weekend at Thrackley, that is on my list, for this year, for sure!! Thank you.

Glad u enjoyed Weekend at Thackerly (I have a copy). Have a good week!

First of all, thank you for that poem. I've saved it. Great words.
Gardening. Amazing. I follow some British people on Instagram, and see their gardens and just sigh. But today we saw robins on the lawn, and last night heard a woodcock. They almost always come at the end of March.
I do love the Maisie Dobbs books.
I've read three this month. Various reasons.

Pat: I suppose some people do only have 2 or 3 books to choose from but I can't imagine it, no. But that's me, if I have a hobby I always go a bit crazy buying things for it... books, jigsaws, dvds if it's a new TV series I love, and so on. I'm an 'all or nothing' sort of person. LOL

Kay: yes, that poem really resonated with me and I suspected it would with other bookish folk too.

Margaret: I had that poem stashed away in my 'Book bits' folder. Where it came from I have no idea so it must've been sitting there a while.

I find it quite hard keeping up with reviews. I'm already one behind and it's only the start of April.

Mother's Day was Saturday for me, for one reason or another, and yes thanks it was really nice.

Yvonne: I always say it's about how much you enjoy the books you read rather than numbers. I know plenty of people who read 200 books a year (my husband is one) but I simply cannot read that fast, so I know how you feel. It is what it is and I'm OK with that.

You're right about Alan Melville's books, I looked into them as well and a few really didn't appeal... the stagey ones for instance.

Generally when I read 2 books at a time they're fiction and non-fiction so I don't mix them up. I thought I was reading two fictions but when I checked it turns out that The Tattooist of Auschwitz is actually non-fiction. So now that's finished I'm again reading two and this time they really are both fiction and both about WW1 and its aftermath. Confusing? Yes.

I've started the 2nd. Maisie Dobbs and it really is very good.

Have a good week!

Judith: That's right, I'm heading off to Austria, France and Ireland this month... sadly not in reality but via books is absolutely fine.

I imagine you're still in the grip of winter? While we're well and truly into spring. Last week was sunny and warm so we got a lot done in the garden. This week is much more a normal April, showers, cool, and actually quite nice.

I hope you enjoy Weekend at Thrackley when you get to it. Do you own it?

Diane: I hope you enjoy Weekend at Thrackley when you get to it. Be ready to giggle.

Nan: My pleasure re the poem.

I suspect like Judith you're still in the grip of winter, you both being in the same region of the USA. I like winter very much but I fancy by April I would be ready for something else.

I've had a conversion in regards to the Maisie Dobbs books, not for the first time I should add. Same thing happened with Dana Stabenow's Kate Shugak books. I've learnt not to say 'never' and that's a good thing, right?