Could the covers of these British Library Crime Classic books possibly be any prettier? 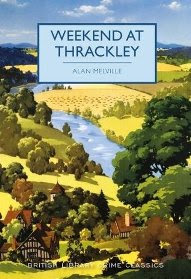 Gorgeous. (Hands up who read that in the voice of Craig Revel-Horwood.)

Jim Henderson is down on his luck. A veteran of World War One, he's not been able to get a job, is thus very hard-up, and has to live in a lodging house with a Mrs. Bertram who, 'read the newspapers rather more than was good for her'. When he receives an invitation to a House party from an Edwin Carson, who claims to have been a friend of his father, he looks upon it as weekend of free food. He's even more pleased to discover that a friend of his, Freddie Usher, has also been invited, although Freddie has no idea why he's on the invitation list.

The two motor off to Surrey and discover on arrival that Thrackley is a large, forbidding establishment in the middle of some dark pine woods. Both of them start to wish they'd not come but standing on the entrance steps is an actress that Freddie's a bit keen on, so stay they do.

As well as the actress and themselves, there're a couple of artists, a Lady Stone and Carson's daughter, Mary. None of them have the first clue why they've been invited but Freddie was asked to bring the family jewels as Carson is an expert in precious stones and wants to see the collection.
The women of the group also have expensive jewellery on them. Jim is confused. He has no expensive gems for his host to study so why is he here?

As a whodunnit this really isn't. There is a dead body but it's way into the book and it's quite clear who did the deed. The book is more of a mystery story to be honest, a slightly obvious one if you read a lot of crime fic as I do, but that didn't matter a jot, the air of menace as the book proceeds and things turn nasty is quite tangible and the change of atmosphere is depicted very cleverly by the author.

Everything about the book is slightly unusual, it's written with a very light hand, Edmund Crispin springs to mind in regard to the humour that's very prevalent at the beginning of the book. I loved Mrs. Bertram, Freddie Usher is straight out of P.G. Wodehouse and Edwin Carson and his rather strange staff fitted into it all very neatly as traditional villains. It even felt a trifle Ealing Comedy-ish... all a bit bonkers... slightly like one of those Brian Rix farces we used to see on the telly, only with a menacing atmosphere.

This was recommended to me by a couple of people and I'm grateful to them as it was definitely one of the best BLCC books I've read. I think Alan Melville wrote quite a few more crime books including Quick Curtain and Death of Anton, both available from the BLCC.

I keep meaning to sample one or two of the BLCC books, but I just know that this is a series I would much rather read as a 'real' book and once I began collecting those amazing covers, I just wouldn't be able to stop until I had the entire collection, when they would be confined to a shelf somewhere, with me not having the time to read them!

I do quite like a good suspenseful thriller, but I am equally kept engaged by an intriguing murder/ mystery whodunnit. It was often the case that I had worked out the identity of an Agatha Christie villain quite early on in the story, when the thrill of reading then became the engaging way in which the storyline was constructed and how the culprit was unmasked, so I am quite used to this format from the more 'classical' authors in the genre.

A good review which was thoughtful and constructive, it lets any potential reader know just what they are getting for their money :)

This does sound so entertaining, Cath! I'm so glad to know you consider it one of the best in the series--I'll be putting it on my list. Excellent review by the way!

Hi Yvonne, yes these BLCC books are quite addictive. Not only are most of the stories rather good but the covers are glorious. I have managed to resist buying them all but it's not easy when I'm in Smiths and they have a whole display of them.

I think if you read a lot in this genre as we do we often pick the culprit out quite early on. In one modern murder book I read, for instance, a policeman was on the scene so quickly I immediately knew it was him. So as you say it resulted in a different way of reading as I tried to prove to myself that he had done it, and he had. It didn't spoil the book at all, it was just a different experience.

Thank you for your kind words, I appreciate your popping in to comment and you always do so so intelligently. I seem to be getting less comments suddenly and thus treasure every one I do get so 'thank you'.

Judith, funny you should be stopping by to comment just as I was answering Yvonne. The book really was quite unusual, especially the very humorous side to the writing, which had me giggling quite a bit. That's rare in a book but delightful when I find it. I'm currently reading a volume of Miss Marple short stories too and that has a similar vein of humour running through. AC doesn't get the credit she deserves for the humour in her writing... it was even on display in her wonderful autobiography, one of the best I've ever read.

Based on your review, this book sounds very good, and I have been wanting to read this author, so I will look for it. (Making sure first that we don't already have a copy. My husband sometimes buys the BLCC books and I forget he has them.)

Tracy: LOL... glad I'm not the only person forgetting which books are in the house. It is easier for me though as my husband never buys any. Which means I'm forgetting the books I myself have bought...

This sounds good - I haven't read any of Alan Melville's books, so I'll look out for them at the library.I remember those Brian Rix farces and enjoyed them at the time but not so sure I would now.

Margaret: I used to be in hysterics watching those farces but then I was only in my teens and more things are hilarious at that age than when you're older.