My first book post in a month. There's a reason for it of course... on the 9th. September I received the sad news that my brother had passed away. It wasn't unexpected, he'd been in poor health for years and had taken a definite turn for the worse over the last year or so. But, regardless, it's always a difficult time and I haven't felt very much like blogging.

I'll do a brief review of the final book I read in September and then a quick rundown of the other books I read last month.

Inspector French and Sir John Magill's Last Journey was Freeman Wills Crofts' 6th. book about the cases of Inspector French of Scotland Yard. It qualifies for Bev's Calendar of Crime challenge under the November category of 'Family relationships play a major role'. I also read it for the European Reading challenge 2019 for the country of the UK... I thought it particularly appropriate as it takes place in three countries of the United Kingdom - England, Scotland and Northern Ireland. 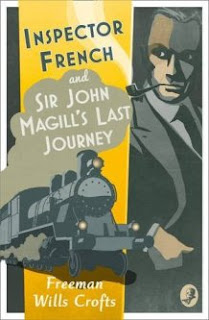 Inspector French receives a visit at Scotland Yard from Detective Sergeant M'Clung of the Royal Ulster Constabulary in Northern Ireland. M'Clung is investigating the disappearance of Sir John Magill who supposedly took the ferry from Scotland to Northern Ireland to stay with his son, prior to a business meeting the next day, but did not turn up. The missing man was retired, having made his money in linen in Belfast and handed the business on to his son, Malcolm. He was working privately on an invention though, and the police wonder if his disappearance is something to do with the plans for this invention. They hope for the best but suspect the worst and when a body is discovered in the grounds of Magill's son's home an investigation is launched that is wide ranging and very complicated indeed.

I've read a couple of books by Freeman Wills Croft this year, The Hog's Back Mystery and Antidote to Venom. I must admit that I enjoyed both of those more than Sir John Magill's Last Journey. I somehow or other got rather bogged down in all the travel times and schedules, there's so much of it, plus rehashing of clues, and possibly because my concentration has not been what it should be I got bored with it all. Nevertheless it was a well written crime yarn, I like Inspector French very much and the setting of three UK countries was a bit different... you don't see many vintage crime books that touch on Northern Ireland.

55. Blue River, Black Sea - Andrew Eames. Non-fiction, travel book, wherein the author travels the length of the Danube. My 18th. book for Bev's Mount TBR challenge. Not bad but dragged a bit. Took off when he went walking in Romania towards the end.

57. Lost in a Pyramid - edited by Andrew Smith. Vintage weird short stories based on pyramids and mummies. Patchy, but did have several good stories.


Looking at these five books I realise that 54, 55, and 57 were mainly read in July and August. Melmoth was read in the first week of September and John Magill towards the end. Other than Bruno I would call it a not very inspiring reading month. It could be said that losing someone is bound to affect your mood but this doesn't apply as only the final book was read after my brother passed away. Nearly all got threes on Goodreads, which is very average for me as I tend towards overmarking rather than under. I'm hoping October might be a bit better readingwise.

Autumn seems to have arrived while I was not paying attention. My favourite time of year for curling up with a good book. Happy reading!

Good to see you back, Cath. I hope October is a better month for you guys in every way.

I've been in mini reading slumps before where everything I read just strikes me as mediocre, with the sense of having read it all before somewhere else. That usually happens when I'm especially stressed, depressed, or tired, and the good news is that it all goes away eventually. I predict a good October in store for you. :-)

Dear Cath,
Please allow yourself lots and lots of time to get back to your life and your interests. If you don't feel like reporting on each book you read, then let it go. Just curl up and rest when you can. Best to you and your family!

Yes, that's precisely it about last month's reading, everything struck as mediocre. Thank you for predicting a better October! I've just started The Man in the Brown Suit by Agatha Christie and it's already better.

Judith: I will do that thing, in fact have spent the last month doing it, just trying to be kind to myself really. To be honest I had already arrived at that place where all books are not reported on, certainly over the last four weeks anyway. And next year instead of doing heaps of challenges I shall just do the European one so not so many reviews required. Blogging needs to start adjusting to me rather than the other way round, as we say over here, 'The tail needs to stop wagging the dog'. Thank you for your best wishes.

Cath, I'm so sorry about the loss of your brother. Truly, it's so hard and I don't wonder that your reading has been affected. I think being kind to yourself is exactly what you should be doing and sometimes we just need a little respite from everything. I love what you said that it's time for 'blogging to adjust to you'. You and me both, girlfriend! I think those of us that have been around in the blogging world for a long time sometimes struggle with letting go of the 'shoulds' and 'musts' and whatnot.

Please take care and I'm hoping that your fall will be peaceful and calm and that any books that come into your life will be 'just the right ones'. Hugs to you!

I'm very sorry to hear your news. I hope all is well with you otherwise. Really like the new picture on your blog header- fall is one of my favorite seasons.

Even when a death isn't totally unexpected, it still always comes as something of a shock when it actually happens and the reality of the situation takes hold. Give yourself time to get back on your feet, but always be prepared for those unexpected moments when some quality 'me time' is needed. The books and your blog will still be there waiting when you decide to return to them.

Autumn has really come at us with a vengeance this year, although I think that tomorrow is destined to be the coldest day so far, but even that will be better than all this constant rain.

Needless to say, I am sure you will have a good idea as to what my choices from your month's tally, will have been... 'The Resistance Man' is right up there, also new to me author Freeman Wills Croft. I can't believe that I haven't read any of his books at all, so I definitely need to put that right. I generally have mixed feelings about cover reprints, however I love this particular cover reprint of his books...

I hope that you have some great titles ready for the rest of this month :)

Cath, I am very sorry to hear that you lost your brother. I am sure it will take a while to get back into things.

I am glad you featured another book by Freeman Wills Croft; I am sure I have told you already I have not read any of his books but I have one or two to try.

Kay. Thank you so much. I took a month to breathe deeply and take stock, and will probably take longer to be honest. I had to smile when you said, 'You and me both, girlfriend'. Sounds odd but I feel like I've done too many book reviews this year, so next year I plan to cut down. I just need to work out how to make it work for me but still continue to blog. I think you have it worked out very nicely by the way.

Jeanne: Thank you. Yes, all is well with me otherwise. Thanks for your comment about my header pic. I know the colours look autumnal but it's actually a Spring photo I took in April at a place called Lacock Abbey in Wiltshire. It reminded me of that piece of music, 'Sheep may safely graze'. I think it looks autumnal because the tree is a copper beech and the leaves are that light bronze colour in the Spring.

Hi Yvonne: It did come as a shock because, although I obviously knew he'd been ill for some time, I didn't expect his passing to come just yet. That said, he had a very rough winter last year and, to be honest, it's actually a blessing that he doesn't have to struggle through another winter like that, in and out of hospital for several months with breathing difficulties and infections. It was horrible.

All this rain is not great. We were back in Cornwall for a week last week, to sort things out, and all the rain did not make things easy.

The Resistance Man was easily the best book of last month, excellent in every respect. I'm currently reading an Agatha Christie and finding the book as reliably excellent as I expected.

Tracy: Thank you. I'm getting there but it feels so odd being the last one left of the immediate family I grew up with.

If you try FWC be prepared for a very in-depth crime story where every aspect is explored. LOL

So sorry to hear about your brother - it's always a great shock losing someone close to you. Take care x Margaret

Cath, I really am so very sorry. My love to you.

Thank you, Nan. It's appreciated.