Today I'm featuring my library pile for my Bookshelf Travelling post. My library stack inhabits a space on the bookshelves in the lounge next to the fireplace. I'll confess I don't always read every book that comes home from the library. I am of course full of good intentions. But then a week or two after they come home with me I suddenly don't fancy a plot that vastly appealed that moment when I picked it up in the library. Or I start to read a particular book and I don't like the way it's written or it's a book from a series I haven't read any of for three years and suddenly I can see *why* I haven't bothered with it for three years. Such is the life of those who borrow books from the library.

Anyway, my current pile consists of these books: 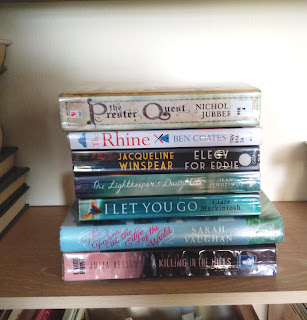 A Killing in the Hills - Julia Keller. A series recommendation from Kay at Kay's Reading Life I think, in connection with my United States Challenge. It's a crime series set in West Virginia

The Farm at the Edge of the World - Sarah Vaughan. Passed on to me by my eldest daughter before the lockdown. This is one of those double timeline stories, WW2 and present day, set in Cornwall and involving secrets I suspect.

I Let You Go - Clare Mackintosh. A psychological thriller set in Wales, recommended by a friend.

The Lighthouse Keeper's Daughters - Jean Pendziwoe. Set on the Canadian shores of Lake Superior this is another book delving into past family secrets. A random grab from the library.

Elegy for Eddie - Jacqueline Winspear. Book nine in the Maisie Dobbs series, I have book eight to read too, on my Kindle.

The Rhine: Following Europe's Greatest River from Amsterdam to the Alps - Ben Coates. Non-fiction. Reserved from the library because I'd enjoyed The Rhine aspect of Castle Skull by John Dickson Carr.

The Prester Quest - Nicholas Jubber. Non-fiction. In 1177 a physician is given a letter by Pope Alexander III to deliver to the King of the Indies, Prester John. The messenger disappears and the letter is lost. Nicholas Jubber sets out to retrace his steps from The Vatican to Ethiopia. This has got one of the lowest ratings I've ever seen on Goodreads, 2.84, so I'm not expecting much from it, but we shall see.

So this lot will be with me now until June, possibly longer. Naturally, we have no idea when our libraries will be open again and although most of us book bloggers have large personal libraries at home, it will still be nice when ours reopens as a trip to the library is one of life's little pleasures for me.

Rarely to I know what I will read "next".. Rereading the Pern series is the only time I can make a book pile to read LOL.. or rereading other's that are a series I loved. I get the feeling you are doing more challenges then you said you would do LOL..

Noooo, just the two challenges still, Pat. Mount tbr and the European one. It's enough and I'll probably do the same next year too. Less pressure. LOL

Really pleased you're enjoying your reread of the Pern books, makes me want to reread them too!

I very nearly did my post on my library loans too. I am missing going to the library - I think this must the longest period when I've not been able to use a library! I don't read all the books I borrow either. I think that is one of the benefits of using the library - it gives you the chance to have a proper look at a book to see if you really want to read it.

I have an e-book of I Let You Go but haven't read it yet. One of my friends recommended it to me too.

Yours could be my words, but with the books I own! E for E is the one Maisie book I couldn't read. It was too painful for me.
Our local libraries are all closed. I haven't gone for years because I have SO many books in my house!

What fuel for book purchases, Cath!
Very intrigued about the book set in Canada on the northern shores of Lake Superior. What a setting!
And for both Ken and me, we're interested in the series set in West Virginia.
By the way, have you completed the state of "Arkansas" for your US challenge? Because we have a possibility if you haven't been able to do that. A mystery series set in the Ozark Mountains in Arkansas, actually, that Ken has been very keen on.

Cath, I purchased A Killing in the Hills by Julia Keller after Kay talked about the series on her blog. Haven't read it yet, of course. A lot of the other books listed here sound interesting. I haven't decided whether I will try the Maisie Dobbs series again because I have such a list of other series to read or continue.

We used to spend a lot of time at the library when my son was growing up but haven't used it much in years. Maybe once life gets back to some semblance of normal and libraries reopen, I may try the library near to me.

A trip to the library IS one of life's little pleasures. One I'm very much missing at the moment. At least you have some interesting books to read until yours reopens. Hope they satisfy! :D

I miss libraries and bookstores a whole lot more than I dreamed I would (considering I must have at least 2500 books in this house), and it's only been a month of isolation. I can't imagine what kind of basket-case I'm going to be if this goes on for another few months.

I'm still finding it difficult to concentrate on my reading - and audiobooks are just about impossible for me to finish in the two-weeks that my library allows me to keep them because I keep falling asleep while listening to them. LOL

At this point, I'm going to have to start reviewing "literary movies" if I'm going to have anything new to say on Book Chase. I did a very good one called "A Brilliant Young Mind" and another called "The Best of Enemies" in the last two days. Both were very thoughtfully produced and really made me think - almost what the best books do for me, but not quite.

Margaret: Yes, I'm missing the library too. We pretty much used to go every week or two and I always looked forward to seeing what was new or seeing if they had the next in a series that I wanted or grabbing something randomly. Let's hope it's not too long before we can resume going.

Nan: Yes, I think I could probably apply the same princples to my own books. I started a murder one yesterday for instance and within a few pages I realised I didn't want to read it right now and went to look for something else. Isn't it such a good thing that we do all have loads of books to choose from now?

Judith: Yes, The Lightkeeper's Daughters really does have a wonderful sounding setting. Might be a similar kind of area to the William Kent Krueger books perhaps? We'll see.

And yes, the West Virginia one is sounding good, and we've been to that state so will be able to picture the setting hopefully.

As to Arkansas, I've read two books, I Know Why the Caged Bird Sings by Maya Angelou and True Grit by Charles Portis. But I would welcome more so let me know what you've found.

Tracy: I think it's so funny how we all jump on good recs from our blogging friends but it doesn't help me to the old tbr pile down. I think I've resigned myself to the fact that it is never going to get much smaller, especially if I keep reading everyone's excellent book posts. LOL

Libraries are wonderful, the downside being the more of their books you borrow the less of your own books you read. It's quite a dilemma sometimes.

Lark: Yes, a trip to the library is so full of wonderful possibilites and possibly that's why I miss it so much.

Sam: Yes, me too. And I'm feeding my nostalgia for bookshops and the library by buying books for my Kindle. Not sure that's a *good* thing.

You made me laugh when you said that you fall asleep while listening to audio books. That would certainly be me too, I just know it.

Literary movies are a good idea if you can't concentrate on books and a nice idea for your blog too I think. I would love to get some interesting movie recs.