Well, I've apparently had rather a slow reading month. I wasn't aware of it but when I checked I found I'd read just five books in November. Ah well, I must've been doing something else, possibly quite a tricky jigsaw puzzle, a pic of which I'll pop at the end of this post.

77. And Only to Deceive by Tasha Alexander

78. Into the London Fog edited by Elizabeth Dearnley

79. The Lantern Men by Elly Griffiths

80. The Song of Achilles by Madeline Miller

81. Christmas Under the Stars - Karen Swan (to be reviewed).

So, five fiction and 'no' non-fiction. What an odd reading month I've had. I haven't even travelled around the world as much as I usually do, being based mainly in the UK with just two separate forays to Greece and Banff in Canada. But it's not that I didn't actually read any non-fiction last month... I read the first quarter of Deep South by Paul Theroux and quite a lot of one of Nigel Slater's diary type cook books which I will finish after Christmas. Plus, I've just started this:

Nadiya Hussain is a household name in the UK. She won The Great British Bake Off in 2015 (seems longer ago than that) and has since been given her own cookery show on the BBC, written several cookbooks and baked for the Queen. This is her story in the form of essay type memoirs and so far it's excellent. Her voice and enthusiasm  really shout out of the pages.

And, as promised, here's the jigsaw puzzle I worked on throughout November: 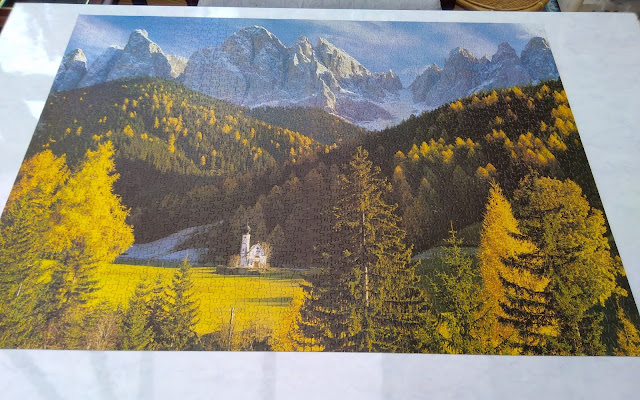 This one is a 2,000 piece scene of St. Johann in the Austrian Tyrol. What a fabulous spot!

So here we are in the Christmas month. It doesn't seem five minutes since the start of 2021 and now we're only four weeks away from 2022. The older you get the more disconcerting this is. Never mind, onwards and upwards to a few interesting reads for December and then that lovely bookish 'fresh start' feeling in the new year.

Busy month, Cath. You've had one of those months that happen to me sometimes, too, where I end up having several things in-progress going into the next month so that it looks as if I've read a lot less than I actually did. That usually turns into a bit of a "bonus" the next month, though. Sometimes I read several hundred pages more than I read in an average month and end up with fewer books actually finished. And those puzzles take me so long to do that I haven't worked one in months even though I keep meaning to get back to them.

My month of November feels like it has been all reading, although we have had lots of doctor appointments, unfortunately. I think it is good that you are doing other things too. Although it really sounds like you did a good bit of reading.

That puzzle is gorgeous and looks very hard. I haven't done one of those in forever.

Cath, you still had a great month and OMG - 2,000 (lovely too) pieces? I have a 500 piece I've been meaning to start. Do you like audio books? I am a multitasker and seem to always have an audiobook going: driving, walking, playing cards with the husband, some nights in bed under the pillow and even when ironing or gardening -- as long as not too many characters.

I love that puzzle. What a pretty scene. It looks complicated, though!

I really need to catch up on the Ruth Galloway series. I read one Griffiths book this year, but it wasn't from that series. Gah! So many books, so little time...

I can't believe how much you do (besides housework!)! I can't imagine how long that puzzle would take me!! (or even a 500 piece one!) I loved talking with you... I would have called anyway closer to Christmas. I hope 2022 is better for both of us!.. and everyone!

Sam: That's exactly the kind of reading month I had. They all catch up with each other and me eventually and, as you said, the next month ends up with bonus books that I probably read more of in a previous month than the month I'm counting them for. The weirdness of being a reader and keeping a record!

Lark: It's scary how quickly December came around again! Well, jigsaw puzzlers come in all shapes and sizes. Thank goodness for variety. :-)

Tracy, sorry to hear you've had to go to a lot of drs. apts. I hope there's nothing serious wrong.

Yes, I think it's probably good that I'm doing something other than read. We do a lot of cooking too but housework... not so much. LOL! Yes, the puzzle certainly was a tricky one.

Diane: Up to now I've not done audio books. I don't know why, just never got around to it. But so many of you - my blogging friends - enjoy them that I think I'm going to have to look into them at some stage. Certainly if my eyes begin to deteriorate I would definitely turn to audio.

Susan: Thank you. It was a really hard puzzle I must say. Scenery ones are always more difficult than any other type.

It's *so* hard keeping up with all the authors we want to read. There's only so much time after all. And all the shiny new books coming out all the time don't help. LOL!

It was so great to chat to you on Sunday. Alway nice to catch up. Oh God yes, surely 2022 has to hold 'something' good for us after the last two years. Sick of all this now.

I have to admit that I never keep a track of the books I read by the month or year. I seem to simple read, review, repeat... at whatever pace I can manage. I know that if I started counting, I would get too stressed out if there wasn't an improvement month on month!

I am still really 'into' my online puzzles right now - both the daily 'jigzone' puzzle and my regular dose of 'jigsawplanet'. As I can change the piece shape of both puzzles and the number of pieces on the latter, I can shake things up a bit, depending on what mood I am in. I do have a large stash of the 'real thing' boxed jigsaws and I know which one I want to work on next, so now I am just waiting for the right mood to move me. I do miss my trips to Switzerland, so your Austrian scenery was lovely to look at!

Just when I thought I had Christmas under control this year, just about all our joint families decided to throw a spanner in the works, so it's back to the drawing board this weekend!!

Thanks for sharing, I hope that all the family is well again now and have a good weekend :)

I am impressed by your reading count, Cath. I seem to be caught up in several books at the moment, and really must finish them. I like the sound of Deep South and also Nadiya Hussein's book. I shall have to add them to my wish list!

Oh and Well done on your jigsaw puzzle! What patience!

I requested a Karen Swan book from my library (a little surprised they had any, as I had never come across her). I'll let you know what I think.

A long and tiring week at work, so I am glad to have escaped for the weekend. And my branch library is reopening tomorrow after two years so we are having a big celebration with the Mayor! If not freezing, it will be fun.

Yvonne: I've been keeping a list of what I read in notebooks for a few years now, probably about fifteen. I'm not sure why as Goodreads gives me the same service with a lot more besides, I'm just a natural list-keeper I think.

Glad you enjoyed seeing the alpine jigsaw and that it reminded you of trips to Switzerland. That's one country I would 'love' to go to.

Sorry to hear the family are throwing your Christmas plans into disarray. Hopefully something can be worked out to please all.

Yes thanks, the family is all well again now, but it took a while. Have a good week.

Val: I'm about three quarters done with Nadiya Hussain's book and enjoying it very much. Her voice jumps off the page at you and it's very interesting to read about another culture.

Thank you re the jigsaw, I find working on them very calming in this crazy world.

Constance: The Karen Swan book, Christmas Under the Stars, was very good but not quite what the title encouraged me to expect! I'll blog about it soon.

Brilliant that your library has reopened and I hope the celebration was a lot of fun?