So, January continues to be a good reading month for me - four books read and I've liked all of them.

Book three was Percy Jackson and the Lightning Thief by Rick Riordan.

I'm late to this party. And only here really because I want to read more about Greek myths this year and I thought Percy would be a really fun way to find out some more, 'plus' I have all five books in the house as they belong to my grand-daughter. Most people will have seen the movie or read the books so know that Percy is the son of a human woman and a God. I won't say which as that's a spoiler. He knew something wasn't right as he's never managed to fit in to any school he's attended. When he kills a Fury in a NY museum and gets whisked off to a school for others like himself, it all slots into place. Not that he's particularly thrilled about any of it. How Percy ends up crossing the USA with two companions, a girl who is also a demigod, and a centaur, and being pursued by just about everybody makes for quite a ride and is a tremendously fun read. The book is well written and full of humour and I can see why it's so popular. I saw on a vlog last night that the series really takes off from book three so I look forward to getting there.

Next up, An Elderly Lady Is Up To No Good by Helene Tursten, translated by Marlaine Delargy.

Another case of me being late to the party as this has been all over the place for several years and I think there is even a second volume now. The book comprises a series of short stories, translated from the Swedish into English, about an 88 year old lady, Maud. She lives rent free in an expensive appartment in Gothenburg. She's alone now after the death of her father and sister and spends her time either away on holiday or on her laptop investigating people. It tends to be people she's in conflict with in real life, people who have upset her or are trying to get the better of her, by foul means usually. And she always has ways of dealing with these individuals...

Sympathising with a killer is not what we should be doing but you can't help it as you read about her reasons and what these people are doing to her or, in one case, to someone she once loved. She certainly plays on her situation of being a 'helpless' old lady but then society has a habit of underestimating the elderly and also dismissing them as senile or half deaf and so on. You feel like she's just getting her own back for these slights. I thoroughly enjoyed this one. Future Crimes, an anthology of science fiction stories based on crimes, murders and so on, edited by Mike Ashley. So far it's a bit patchy. I've read three stories, all quite long. The first two were average and the third absolutely excellent (Legwork by Eric Frank Russell). 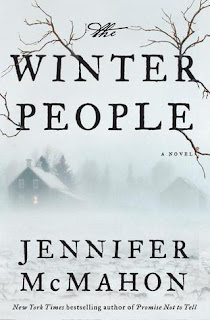 The Winter People by Jennifer McMahon is set in Vermont with two timelines, 1908 and 2008. The first fifty pages were set 1908 and were so depressing and gloomy I'm in two minds about continuing. Anyone read this and can say whether it gets a bit more cheerful?

Anyway, I hope your January reading is going well and you're finding lots of good books to read.

I have managed to read three books so far this month, all of which I have enjoyed. However, after my current round of Bog Tour commitments in February, I am going to be slowing things down quite a lot and going back to what I call 'hobby reading'. I have lots of older physical copies of books on my shelves still unread, which for a variety of reasons I have needed to cull, so I intend to work my way through some of those, as I do hate to give a book away unread! I also want to try my hand at a couple of new ideas, rather than sitting at this computer for most of the day.

Having said all that, I am sorely tempted by both 'An Elderly lady Is Up To No Good' and 'The Winter People' I know you said you are struggling a little with 'Winter People' and I have to admit that the Goodreads ratings are very mixed, although there are also a lot of them! There is definitely something intriguing about that premise.

Enjoy the rest of your reading month :)

Cath, you are having a great month. I loved An Elderly Lady....yes, evil her evil side appealed to me LOL. Her most recent book is An Elderly Lady is Up to No Good - was pretty good as well. Have you read other books by her? She's written quite a few I see: https://www.bookseriesinorder.com/helene-tursten/

Winter People is one I haven't read yet but I do like dual timelines as well as Vermont as a setting. I do like when a book pulls me in quickly though.

My reading is going really well as we've been hibernating because of virus and weather. Have a good week.

Yvonne: It sounds like a nice plan to cut back on your blog tours a little and pick up some of the older books on your shelves. It does seem a shame to have to cull some of them without reading, though I have done that in the past out of necessity.

The Winter People is very popular so I will persevere to see where it goes. I may find the 2008 sections more to my taste. If not, it will have to be a rare DNF for me.

Thanks for stopping by!

Diane: I'm glad I'm not the only one to whom Maud's evil side appealed. LOL No, I haven't read anything else by her but I will be looking into those as the idea of reading more Swedish books quite appeals, but I'm not really into dark Scandi-noir type stories.

Yes, we're pretty much still hibernating too. Still seeing family and going shopping but otherwise I'm happy to be at home reading.

Ha, I've heard about Maud before- I think at Book Chase. I don't usually enjoy stories about murderers but I have to say the more I see of Maud in book reviews, the more I am tempted to try this one. You never know what might be appealing after all, even if it's far outside my comfort zone!

Jeane: Yes, I remember Sam reviewing it not that long ago (it's probably months, LOL). But there were others. I would call these gentle murder stories, and clever the way things are achieved, rather than dark and uncomfortable.

I wouldn't say that The Winter People is a cheerful novel; I remember it being very atmospheric and eerie and suspenseful. But I did really like it. And I've got An Elderly Lady is Up to No Good on my TBR list. :)

The only one I am familiar with here is An Elderly Lady is Up to No Good and I loved that one. I have the next one in that series but haven't started it yet.

Future Crimes looks good, but not adding to my short story books until I have read more of the ones I already have. This one came out recently though so I should be able to get a copy later.

My reading in January is going well but we are getting ready for my husband's eye surgery on Friday, so things are a bit tense here.

Lark: No it isn't. ;-) But now that it's moved on to be primarily in the modern day with flashbacks via diary entries I'm much happier with it. I like Ruthie and Fawn and want to know where their mother went and where Gary fits into it all. Suddenly it's a different book that I like. :-)

Tracy: Future Crimes might be a 'so-so' collection. So far I've loved one story out of three and am hoping that I'll love more.

I do hope your husband's eye surgery goes ok. It's a tense time for you and I understand that with my husband having been through all kinds of surgeries. You take care.

Cath, I read The Winter People back in 2015. I checked to see if I wrote about the book on my blog and I did. You could see what I said about it when you get finished if you like. Anyway, I've read other books by the author and like the way she tells a story. I did say in my review that I was unsettled by the book. Hope you're enjoying it. I honestly don't remember a lot about it now. Maybe a reread is in order. LOL

I have not read any of the Percy Jackson books. An Elderly lady up to no good does sound intriguing! I see you are doing the Classics challenge, I am not, but since I have already read 2 this year, maybe I should, LOL!

I enjoy McMahon's books, but they are all pretty dark and depressing. I really liked THE WINTER PEOPLE, but I can't remember the story enough to advise you whether or not to continue. Sorry! I'll be interested to see what you decide.

Kay: Thanks for letting me know that you reviewed The Winter People in 2015. I'll go and look for it in a moment.

Cindy: Yes, it does sound like you ought to do the Classics challenge if you've already read two. LOL

Susan: Well, I did continue, have finished it and reviewed already. Very glad I didn't give up!

I only read the first Percy Jackson, I think, but found it very amusing. My nephews were obsessed with these books for several years (my mother liked this as it made gift giving easy).

The Elderly Lady is quite new to me and I am intrigued. I like revenge!

Constance: It's nice to hear of boys being so into books to be honest, how great that they were so obessed with Percy Jackson!