A couple of mysteries

A couple of mysteries to review quickly today. Both of them for various challenges I'm doing.

First up, Madame Maigret's Own Case by Georges Simenon. I read this as my book eight for Bev's Vintage Mystery challenge and it covers the category: A book with a woman in the title. Madame Maigret is sitting on a bench, enjoying the fresh air, waiting for the time of her dentist's appointment to arrive. A woman is playing with a lovely little boy, no more than an infant, when suddenly she becomes agitated, asks Madame to look after her child for a short while, and rushes off. Several hours later, Madame has missed her appointment and the woman has not returned. When she eventually does, it's in a taxi and, without even thanking the baby-sitter, she bundles the child into the car and is away. Madame Maigret is not only very annoyed but also rather perplexed. Meanwhile the police have received an anonymous message to say that a body has been incinerated in the home and business premises of a Paris bookbinder. There's a blue suit covered in blood stains in the closet and a large suitcase has gone missing but the bookbinder refuses to admit any knowledge of the suggested crime. Maigret's progress in the case is blocked at every turn by a young lawyer who clearly has some axe to grind with the inspector. Eventually it materialises that the Madame Maigret's odd experience with the woman and child and Maigret's latest case might be connected. It also seems that using her knowledge of female attire, Madame Maigret can help solve the case.

This is the fourth Maigret book I've read this year as part of the Vintage Crime challenge. Maigret is based in Paris of course but so far this is the first book I've read that's set in the capital city. One was in Holland, another Concarneau, and yet another on a canal in the French countryside. Strangely perhaps, I didn't enjoy this Paris based novel as much as the others. I suspect it may have something to do with confusion. I got a bit bogged down in a lot of different characters up to no good. The plot was rather convoluted and I really did struggle to keep up. I assumed it was just me but then I checked Goodreads and found that others had had the same experience. This book is rather later than the other three, those being 1930s and 40s books and this being written in 1958, just meeting the 1960 deadline for the challenge. I wondered if that had anything to do with it, whether the early books were better.... not that it was a bad book at all, just sort of 'average'. I think perhaps I expected more involvement for Madame Maigret, there was some but not as much as the title might suggest. I did however enjoy seeing the domestic arrangements of the Maigrets' marriage. That part was fun and enhanced an otherwise average Maigret outing.

Next, Huntingtower by John Buchan. Better take a deep breath... I read this for Peggy's Read Scotland 2014 challenge, Riedel Fascination's My Kind of Mystery challenge, and Bev's 2014, Mount TBR challenge. Think that's all... 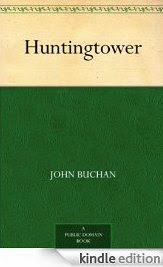 Dickson McCunn is now a retired man. For years he was a respected part of the middle-class, Glasgow estabishment, owning and running a very successful grocery business. At fifty-five, he's well-off, a bit of a romantic, and yearns for an adventure before he gets too old to enjoy it. His wife is away so off he goes on a walking holiday. He fetches up in a remote village where he comes across a poet. He doesn't take to the poet, who criticises Dickson's taste in poetry and keeps calling him 'Dogson'. Which is all rather unfortunate as he comes across him the next day, further on, and somehow the two get involved in the rum goings on in a crumbling mansion, miles from anywhere. They discover that a young woman is being kept prisoner by a group of ruffians. The poet, Hermitage, knows the girl, a Russian princess. Dickson, realising he's in the middle of a real-life adventure, suddenly gets cold feet. But he can't back out now because help is at hand in the shape of the Gorbals Diehards, an unruly bunch of boys from Glasgow. Dickson can't be seen to be cowardly in front of the boys, who are known to him. In fact, he's in it up to his neck and his mettle is going to be sorely tested before the whole messy business is drawn to a conclusion.

Well this book was sheer joy and fun from start to finish. Middle-aged Dickson McCunn is a delightful if rather unlikely hero and easy to identify with. Like everyone he dreams of being a hero but when the reality presents itself realises that being a hero is a messy business and people get hurt. His Scottishness shines off the page and there is a bit of Scottish dialect which can throw you a bit but is easily worked out one way or another. Previously I had only read 39 Steps by John Buchan (A Richard Hannay story) and could hardly remember that, so was not sure what to expect from the writing. It turns out that the writing is beautiful, conveying as it does a wonderful sense of the countryside... the moors and the coastline... of Scotland. That took me by surprise, I must admit. I don't remember a strong sense of place in 39 Steps but Huntingtower definitely has one. I got this as a free Kindle book from Amazon. There are two more books in the Dickson McCunn series, Castle Gay and The House of the Four Winds. Those are not free but I found them free to download on Gutenberg Australia. I will definitely be reading both.

gosh but you are on such a fast roll you will never grow moss!!

Funny how sometimes a writer we like writes something only "so so" .. but glad you haven't had anything "bad" lately.

Pat: LOL. But I've slowed up this montgh. Easter hols for the grandkids and the garden needs knocking into shape. Bit less time to read.

I did stop reading one book that was boring me but otherwise no, it's been quite good with interesting books this year.

It looks like you are having a great reading year so far!

I have yet to read Buchan but I love his sister's books! I will definitely read this one!

John Buchan is Great isn't he ,,.My favourites are John MacNab and Sick heart River, but the Dickson McCunn books are really enjoyable too!

and his sister O.Douglas wrote pleasant books as well (some are on project Gut)

Kelly: Yes, I do seem to be. Slowing down a little now though, as I'm having a busy month.

Peggy: I'd forgotten that John Buchan's sister was O. Douglas. I've never read any of her books so must put that right at some stage.

Val: I'll look those two up and if possible pop them on my ereader.

I really must try something by O Douglas... I forgot they were brother and sister.

I love these reviews, Cath! I read some Maigret many years ago, and don't remember much to compare with, though I think you are right, he's not as involved as you would think. You make me want to read the Buchan books now just for the Scottish scenery! lol

Thanks, Susan. I was very pleasantly surprised at the wonderful descriptions of the Scottish scenery in the Buchan books. Will definitely read more.

I do love his sister's writing, but have read only the 39 Steps. I tried the next one- something about Green I think?- but couldn't get into it.

Nan: Greenmantle I expect. I don't remember if I have ever read it. I think you would love Huntingtower though, pretty sure its charm would really appeal to you.

I really enjoyed The 39 Steps when I read it. I've got Buchan on my list to read more of...

Bev: Me too and I will get around to more of his books at some stage.