Two fantasy books to be briefly reviewed today. Both of them are for Carl's Once Upon a Time VIII challenge.

First up, The Ocean at the End of the Lane by Neil Gaiman. 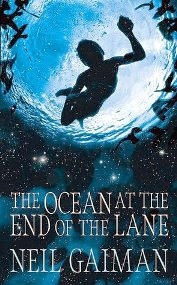 A man is attending a funeral and on a whim decides to visit the area where he grew up. He finds a cottage where he had friends, an old woman allows him to sit by a pond and as he sits he remembers... a young boy who lived with his parents and sister on the edge of a village. When a financial crisis hits the family the parents decide to take in a lodger. Then the lodger dies in a car accident at the end of a quiet lane. At the end of this lane lives a friend of the boy's, Lettie Hempstock. She lives with her mother and grandmother and when he's with them the boy feels as though he is completely safe... a feeling he no longer has at home as his parents have hired a Nanny to look after the children. The boy knows she is not who she says she is but no one believes him and the only place of safety is with the family of women at the end of the lane.

That brief sketch of this book is all I'm prepared to say about the plot and even that might be a bit too much. This is genuinely one of those books that people need to read for themselves; knowing very much about it before you start is not a good thing in my opinion. Let me be honest, I haven't liked every full-length novel I've read by Gaiman, nor all of his short stories... some of those leave me cold, others I find so-so, and a few I thought were terrific. Nevertheless, I still think he's brilliant because when he hits the spot - he *really* hits the spot. The Ocean at the End of the Lane is a fine example of Neil Gaimen 'hitting the spot'. It's about family and home not always being the safe haven it ought to be. At seven, very little about your life is under your control and the boy instinctively knows this. He realises that there is little he can do about the terrifying things that are happening, but nevertheless he must try. And take it from me, there's some scary stuff in this book, really scary. Not horror in a gory sense but the kind of chilling stuff that could easily keep you awake at night if you were that way inclined which, as a child, I was. The three females living at the end of the lane are pretty fascinating. I won't go into the origin and ideas behind their characters or existance but for me they were what made the book work as well as it did and I loved the explanation for them. We all need that kind of wonder in our lives and Neil Gaiman is amazing at putting such ideas into writing. Brilliant, brilliant book.

So, one brilliant book and one er... not so brilliant: Lost Things by Melissa Scott and Jo Graham. 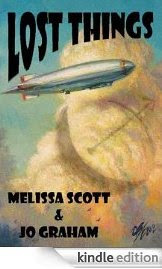 Lewis Segura is an ex-World War one fighter pilot with very few prospects. He gets a flying job working for a small company owned by Alma Gilchrist, a widow, with whom he gets involved. Lewis is an indivisual whose very vivid dreams come true and it seems Alma and the two men who work for her, Jerry and Mitch, also have weird and wonderful talents. Jerry was an archaeologist before the war took his leg. He is contacted by an ex-colleague who wants him to do a job concerned with some tablets that have been dug up out of a lake in Italy. Alma can't understand why they've been asked but all soon becomes clear when someone tries to kill Jerry with magic. The man gets away and an airborn chase across America ensues. It seems some things are better left buried...

I left my first two star rating on Goodreads when I finished this. It should have been two and a half really as it wasn't actually terrible - just a tiny bit *dull*. I bought it for my Kindle just before the start of Once Upon a Time VIII, thinking it sounded quite exciting. Luckily I didn't pay much as it really, really wasn't. Too much detail of day to day stuff and not enough of the magic and different magical lodges that exist in this 1920s world. Everything was described in minute detail... apart from anything really interesting. There was a connection with Roman gods and demons and an archaeology slant. Again not really centred on as it should have been. How frustrating! I kept reading thinking it would pick up and yes, it did a little, but sadly only marginally. Ah well, I've had a run of rather good books and it had to come to an end at some stage.

I've read four books for the Once Upon a Time VIII challenge now and am pretty happy with my progress so far.

I still haven't read anything by Gaiman - there was one of his in the library on Friday, but as I've got lots of books on loan at the moment I left it there! I can't remember which one it was. I was in the library to pick up Sisters of Sinai that I'd reserved! I'm hoping to start it soon.

Shame about Lost things, but not every book can be brilliant and the really good ones wouldn't stand out as well then anyway.

I've not been posting much recently, but I have been reading - so much to catch up with now.

I think I've only liked 2 Gaiman books but this one sounds like it might be a 3rd ...if I ever get around to buying books again I will try this one.. off we go to add it to the wish list!

Margaret: I'd be hard put to say where to start if you wanted to read something by NG. I haven't read his three famous adult books so can't say about those. Possibly The Graveyard Book would be good, or this one I've just reviewed. His short stories are not bad too.

Hope you enjoy Sisters of Sinai. It's certainly one of the most interesting books I've read this year.

Oh, I totally agree, it would be no good at if all books were brilliant. I'm pretty good at choosing good ones for myself but you can't be 100% accurate and the less than good ones make the good ones even more precious.

Pat: I think you would like this one's other worldliness. It's a pageturner too. It could be read for OUaT or RIP as it suits both.

I felt the same about The Ocean at the End of the Lane - I'm not a big Gaiman fan wither but this one was wonderful!

Sam: It was a wonderful book, I've yet to come across anyone that didn't like it.

Just spent some delightful moments here, Cath, catching up on your posts, with more books to add to the lists we all have. :The Ocean at the End of the Lane" has me the most curious.

Lynn: It really does. Sadly, when you read a good book like that proceeding books struggle to be as good.

Penny: Glad you enjoyed the various posts. I have some catching up to do too after a busy April.

I finally have The Ocean at the End of the Lane out from the library!! Yaaay! So now I can read it this weekend, and then come back to compare to your lovely review. I read parts of your review, but not in depth so the novel will hold some surprises for me. I did enjoy your review very much, Cath. Glad you liked it that much, and I do have to agree - some of his books I love, some are ok. I enjoyed Neverwhere and Graveyard Book very much, and American Gods was incredibly enjoyable. Oh, and Coraline and the button eyed mother! that was creepy in a fun way, and my kids love it too :-)

Susuan: That's brilliant that you have Ocean at long last. That's a good idea not to read everything I said, I tend to do the same thing with reviewed books that I plan to read soon. I really muct read some more of Gaiman's book, such as American Gods amd Neverwhere. I'll get to it eventually.