My second book for Carl's Once Upon a Time VIII reading challenge is Thirteenth Child by Patricia Wrede. 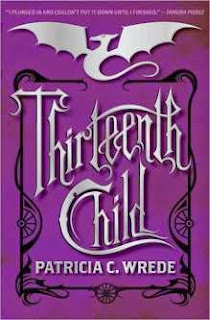 Eff (short for Francine) Rothmer is a young girl living in the town of Helvan Shores, somewhere in the east of an alternate universe USA. She is one of a large family, a twin in fact, a little older than her brother, Lan. The unusual fact about Eff is that she is a thirteenth child, and the unusual fact about Lan is that he is the seventh son of a seventh son. This means that while Lan is celebrated as a potentially powerful practicioner of magic and very lucky to be around, Eff is feared as someone who will bring bad luck to her family and to people who come into contact with her. Luckily, her immediate family do not fear or depise her but her huge count of uncles, aunts, cousins and so forth do, and treat her accordingly. Life for Eff is difficult.

Things come to a head and Eff's parents decide it's time to move the family elsewhere. Her father is offered a post at a school of magic on the frontier, a place where a magical 'divide' protects new settlers from the wilderness and the unusual and dangerous beasts that live there. Magicians are needed to help keep the spells that keep people safe, in place. Here Eff discovers what it is to live without prejudice. No one knows she's a thirteenth child as a number of her siblings have married or stayed behind for their education. Lan's status is known though and and for him life is now all about special lessons and special treatment: Eff realises they're drifting apart.

Eff's challenge is to make a life for herself in this strange place. This she does, making new friends and doing her best at learning magic herself. But she can't forget the fact that she is meant to grow up to be evil. The knowledge lives inside her like a virus and means she has a secret she has to keep at all costs. The trouble with keeping secrets is that the effort required eventually takes its toll...

I didn't realise when I started to read this book that there was some kind of problem with it. I read it, found it to be quite enjoyable, although taking rather a long time to really get going and possibly never really living up to my expectations. To tell the truth it's more of a coming-of-age story than anything else and as such it wasn't a bad read. But, if reading for high fantasy, loads of magical happenings and weird and unusual animals, as is hinted at in the synopsis, then the reader might be disappointed. It felt more like an introduction to be honest. For my liking there just wasn't enough of a fantasy element.

What we did have here was a real family. Not an idealised one where everyone is nice to each other but a living breathing entity where people argue, are spoilt, have favourites, misbehave, but still stick together regardless. A mother who lays down the law, worries about her children, is sometimes unreasonable. A father who's so busy with his work that sometimes the family take second place. Eff herself is a very rounded character, trying to do her best despite the 'thirteenth child' tag that is forced upon her from very early in her life. She doesn't do a lot of complainiing - I thought it wouldn't have harmed if she had done a bit more - but it's clear from the start that this is quite an unequal society. Girls are allowed education, which is something, but the boys have more freedom in just about every aspect of life. I thought the author did a good job of depicting the female 'guilt' complex, Eff is a very deep thinking girl and shoulders a lot of guilt which no one bothers to relieve her of and nor do they understand why she feels that way, especially her friends who are boys. It's quite sad.

So, what is the problem I mentioned earlier? Well, although this is a fantasy tale it is set loosely during the American pioneering days of the 1800s. And thus it seems that some people expected there to Native Americans in it, and there are none. I think the author explained it by saying that they never crossed the land bridge and thus didn't spread into North America in her universe. This caused her to be accused of racism and there were flame wars on Twitter and all that kind of thing. A real can of worms. I don't plan to get into something that happened 5 years ago, the book is what it is, and I'm not sure accusing an author of racism because she ommitted something you think should be there is particularly fair.

The decision I have to make is whether to read on in this series based on this first book. It didn't quite live up to my expectations but there are intriguing ideas and Eff's plans for her future excite me. Perhaps future books supply more of what this book promised? My library doesn't have the second book, Across the Great Barrier, so I would have to think it worth buying. Goodread reviews seem to be split between 'this is better than book 1' and 'still too much internalising'. I'll have to think about it as I'm trying not to buy too many books at the moment and those I do buy I've decided I must really want for a good reason. Why is nothing ever simple?

I read this book quite a long time ago and decided it didn't live up to what I thought either and never went on to read the other books...sisters once again! woohoo!

I am not a big fan of Patricia Wrede. I just do not like her writing style... I want to! It just never happens. :(

Pat: I just read your very sad news on FB. I can't tell you how sorry I am.

Yes, we're of one mind about this book.

Kelly: I don't mind her writing style but somehow this book did not excite me like I was hoping.

Sorry it disappointed. I hate it when I have high expectations that are not realized. The idea of the 7th son and 13th child sounds interesting, but I'm not sure about the setting.

I read this one and had similar feelings--I liked it but it just...never quite lived up to what I wanted. I did go on to read the next two, and felt pretty similar about those. I finally decided that it was too much *telling.* The book skimmed along the surface too much, and I couldn't get into the scene or Eff's emotions. That said, I did *love* the alternate history aspect of things, and enjoyed seeing all that play out more in the later books...

I've decided too not to buy books unless I really want to read them - I have too many unread books that were either impulse buys (which can be a good thing, or not) and books I bought because they looked OK to make up the 3 for 2 offers - often these have turned out to be just 'so-so' books, so I'm thinking 'if in doubt, don't buy it.'

Jenclair: There's just that slightly let-down feeling when you feel a book isn't all that it might be. A shame.

Marveloustales: Nice to hear the opinion of someone who has read the next two books. I think your comment of it 'skimming along the surface too much' is spot-on. Yes, I liked the AU aspect and that's what's making me think seriously about carrying on. I will have to think about it.

Margaret: This is exactly the thing that's happened to me... particularly the 3 for 2 offers thing. And that's exactly the frame of mind I'm now in as well.

Thanks for the review. I don't think I'll add this to my list - there seems to be a fairly strong opinion here that this doesn't live up to expectations.
Lynn :D

I haven't read this book yet, though I did recently read another by her, which I did enjoy, though again, I thought there was too much internalising. Enjoyable writing, but not deeply affecting, I guess is what I get from her books.

I'm trying not to buy too many books this year, because I have so many stacks of mysteries and fantasy that I really want to get to, already on my shelves! I really need to not do anything but read for a year to get caught up! And that's not going to happen. So I'm trying to buy only books I really want to read, for now. Looks like a lot of us are feeling that way :-)

Lyn: Everyone has different opinions on books naturally, but yes, it does seem that that opinion is rather prevalent here.

Susan: Your phrase, 'Not deeply affecting' is spot on as far as I'm concerned. Which does seem weird considering all that internalising. Weird how that works so well in Among Others, but not with this.

I shall let my family get me books for my birthday but try to resist buying a lot myself. The odd one, yes. I know it won't work for me to ban book-buying altogether. LOL