Happy Easter to anyone who happens to be reading this. Hope the long Easter weekend is everything you would like it to be.

Bit busy at the moment but I did finish a book a few days ago and that book was The Red House Mystery by A.A. Milne. This one qualifies for two challenges - Bev's Vintage Mystery Bingo Challenge (it qualifies for the category, 'A book with a colour in the title') and Bev's Mount TBR 2014 Challenge. 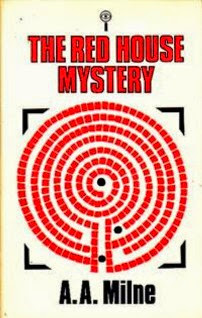 There's a house party going on at The Red House - owner, one Mark Ablett. Various people are present but one of them, Bill Beverly, is a particular friend of man about town, Antony Gillingham. On a whim, Antony decides to pay his friend a visit while he's staying at The Red House but his timing turns out to be rather bad... or good depending on your point of view. Antony arrives just as Cayley, Ablett's cousin, is trying to gain entrance to the locked study. An argument has been heard followed by a gunshot. Cayley and Gillingham have to break into the study through a window and there they find the dead body of a man. It quickly materialises that the dead man is Mark Ablett's brother, Robert, home from Australia on a visit. Servants say they heard the sound of two voices - Mark and his brother - rowing. But Mark is nowhere to be seen and there's no trace of him anywhere.

Antony Gillingham is a man of independent means who has a habit of wanting to find out what various occupations are like by actually doing them. Thus, for instance, he was a barman for a while and another time a valet. He met Bill Beverly while serving in a tobaconist's shop. Now he sees his opportunity to become an amateur detective, if only for a short while, and try to discover who shot Robert Ablett and why.

There are not many suspects, most of the house party were away from the house playing golf. The case is pretty-much a 'locked room' sort of a mystery, involving a lot of theory but also a great deal of spying and investigation of the house itself by Antony and Bill. So many things just do not add up. It seems fairly obvious that Mark must have shot his brother but how did he get out of the room without being seen? And most important of all: where exactky *is* Mark Ablett?

It's funny that it's often at about the halfway mark when reading a book I own, that I suddenly decide whether or not I want to keep it. When I started The Red House Mystery it was with the plan of reading it and putting it in the charity shop box straight after. Best laid plans and all that... this one is just a little bit too good to let go.

Why? Well for a kick-off it doesn't take itself at all seriously. I gather A.A. Milne, a big fan of the crime genre, wrote it as a kind of spoof, humorous homage to the genre. And it is full of humour, lots of fun references to Sherlock Holmes and Dr. Watson for instance and some hugely entertaining dialogue. The odd thing is that after being written as a not too serious attempt at a crime yarn it then apparently became a bit of a classic in the genre. And it's really not difficult to understand why.

Antony Gillingham as the detective is perhaps a bit too cock-sure of himself, almost to the point of being annoying. He's saved by his crazy enthusiasm and the rather manic way he goes about solving the crime, dragging Bill along with him but never quite allowing his sidekick in on all his thought processes. The two of them actually make a charming pair of sleuths in that easy manner of the 1920s whereby men had no problem with friendships that involved walking along arm in arm or speaking to each other in quite an intimate manner. Impossible to imagine these days and it made me wonder at what point that kind of ease of male companionship came to an end. I certainly don't remember it in my lifetime, but it's there in books set in the 1920s and 30s, so my guess is that somehow the war put a stop to it. I wonder why or how? Very odd and perhaps a little sad too.

As mysteries go the story is a little unusual in that you think there's going to be a huge list of suspects but then they all get sent away and you end up with just two. It's not so much a case of whodunnit as *how*... because it's all rather complicated. Perhaps locked room mysteries often are, I don't know. I do know that the much loved author of the Winnie the Pooh books was a class act when it came to crime writing and I feel it's a great shame he didn't write more about the duo of Antony Gillingham and Bill Beverly. They were different enough to be vastly entertaining and it would have been nice had there been several books rather than just one.

This one will definitely *not* be going into the charity shop box.

well since it WON"t be in the charity shop box we can deduct that it was enjoyable and possibly a reread someday! lol

I finished a book also but have to get around to posting it...Carls review list won't let me post.. it keeps telling me there was an error and try later.. after a week of trying to list the Piers Anthony book I gave up

It is an excellent book, Cath. And a shame he didn't write more. I read his dad loved mysteries and he wrote it for him.

Pat: Yes, definitely a reread at some stage.

Have you mentioned that problem to Carl?

Peggy: It's a huge shame he didn't write more crime stories as he clearly had a real talent for it.

Heathen that I am, I had no idea that Milne had written anything other than the 'Pooh' stories.

Some of his adult books actually sound quite entertaining and 'The Red House Mystery' is definitely right up my street.

I really do need to make time for some of the classical books and authors, I obviously don't know what I have been missing out on.

A great review from you definitely sold this one to me, thanks.

Happy Easter, Cath. It's been a busy one for me too - visiting family, grandson had his 12th birthday! but I'm back home now with a lot of catching up to do.

I'd heard of this book and I can see that it's one to look out for - books set in that period have a certain 'old fashioned' appeal, I think.

Hello Yvonne, hope you're enjoying your Easter? I've been busy for several weeks (and my reading has suffered accordingly) but things will be quieter for a bit now so hopefully I can catch up a bit here and elsewhere.

I knew Milne had written other things - vaguely - but not that the one crime tale he'd written was so good! Quite surprised in fact.

I found my copy in a charity shop and have seen others since so keep an eye out, you might be lucky.

Margaret: I hope you're having a nice Easter too. Yes, these grandchildren grow up so quickly. My grand-daughter is 14 in June!

I too am back online properly with a lot of catching up to do.

Yes, they do have a real old fashioned appeal, harking back to a quieter, less complicated time. Not that things were better, many things weren't of course, but life was less fraught and demanding I think.

Gosh Cath I've had this book for years and never actually read it....now I'll have to go hunt on my shelves and hope It's still there....

Val: I hope you found it!

Love this one! It's a downright shame that he didn't write more mysteries--I'm sure he would have just gotten better at them.

Bev: I agree it is a donwright shame. What a brilliant series it would have made!