This is the first proper book of 2008 for me. Even though I started it before the 1st. January the majority of it was read this year. And it's taken me a while! Not the book's fault but mine - I've just been so busy since the new year started. 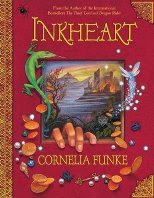 Anyway, what a cracking read for the start of a new year! I've been tempted by Inkheart by Cornelia Funke several times in the library but never actually brought it home. But, inspired by a post by Deslily about the new movie of the book, due out in March, I decided it was time I read it because it looks like a movie I will love and want to see.

This is, in fact, a book about books. About people who love books, about people who obsess over them and also about people who have no understanding of books whatsoever. 'All life is here' as they say. Twelve year old, Meggie, lives with her father, Mo. They move around a lot and Meggie is not sure why. Her father is a bookbinder with an overwhelming love of books but he has never read out loud to her; again, she doesn't know why. One day she looks out of the window and a rather disreputable looking man is standing there watching the house. This is Dustfinger. Meggie takes an instant dislike but it's clear he knows her father very well indeed. Suddenly they are on the move again and Meggie, her father and Dustfinger go to stay with Aunt Elinor, a rather forbidding woman with more books than Meggie has ever seen in her life. Elinor cares more for her books than she does for people and she - and Dustfinger - are curiously obsessed with a book Mo carries around with him, Inkheart. Meggie sets about finding out what is so special about this book but her investigations are interrupted when her father is suddenly kidnapped. Dustfinger appears to know more than he's willing to tell and Meggie and Elinor persuade him to set off with them in hot pursuit of the kidnappers. That quest brings Capricorn and his minions into their lives. He is about as frightening a man as it's possible to meet, but where has he come from? And why is *he*, an illiterate, also obsessed with the book called Inkheart? And what *is* it that's so special about Meggie's father, Mo? What can he do that others can't?

This is one of the new breed of young adult books that's so prevalent at the moment. The genre is fair brimming with talented new writers, Garth Nix, Trudi Canavan, Joseph Delaney, Christopher Paolini, Angie Sage, the list is endless. Now add Cornielia Funke to said list because I really loved Inkheart, which is the first in a series, although I'm not sure what the series is named. The plot gallops along at a great rate of knots, no hanging around here as you career around the countryside of er... well, I *think* it's Italy but I'm not sure it was ever stated. It's a pageturner really, and I can see that it would work really well on the big screen. I *hope* it will encourage both children and adults to take up reading when they see the film and I personally can't wait to see Elinor's library! In the book I liked the way each chapter begins with a quote from children's classics such as Jungle Book, Peter Pan, Huckleberry Finn and so on. It's as though the author is acknowledging a huge tradition of children's writing and the contribution that that has made, not only to her life, but to her own writing as well. Nicely done.

I have the second book of the series, Inkspell, on my library pile even though I had to have a tussle with the library assistant before she would let me have it. *Apparently* it's a children's book!!! Well, you don't say!! Even Hubby was speechless and that doesn't happen very often. ;-)

Now reading: A Study in Scarlet by Arthur Conan Doyle
Posted by Cath at 11:24

Greetings, Cath. I thought I would return your visit and I'm very glad that I did. What an interesting blog you have.

I like the sound of 'Inkheart' and will definitely read it before the film comes out. I think some of our best writers are concentrating on this young adult audience at present and we older adults are enjoying their work very much.

Hi Cath!! Oh my, I am soooooooo glad you enjoyed Inkheart!!! Cornelia Funke is surely an excellent story teller!! I even read her book Dragon Rider which is directed at an even younger audience and managed to enjoy it just because she really knows how to be a great story teller!!

I have NO DOUBT now that you will also like Inkspell!! And hopefully in April the last book, Inkdeath will be release in English. (It was released last year in German, her native language) It took this long to translate it, I am guessing because they want to make it "right"! I can't wait for both the movie and the third book!!

Someone should let the librarian in on the secret, good books are good books whether they are written for children, adults or whoever! Reminds me of a very serious chap I saw in Blackwells just after the last Harry Potter came out who, when the shop assistant asked if he had read it, said 'No, it's kids' stuff, isn't it?'
This book sounds great fun.

Hi Monix, nice of you to drop in and thanks for your kind comment about my blog.

It does seem to me that some of the most imaginative writers around at the moment are writing fantasy for young adults. My eldest daughter managed to get her non-reading husband reading by introducing him to this genre and now he's firmly hooked. As Eloise said in her comment, 'Good books are good books'. And anyway, why should teenagers have all the fun? LOL!

Hi Pat. I'm sure you could tell that I really adored Inkheart. I wish I had time to read it more quickly but things have been busy. I know I'll love Inkspell but I'm making myself wait a bit as I have a couple of other books to read first. Looking forward to April!

I quite agree, Eloise, someone *should* let that librarian in on the secret. I didn't think it *was* a secret. I thought most people who had anything to do with books were aware of what was happening in young adult literature at the moment. Even Richard and Judy are talking about it. ;-) And as for the, 'Oh so serious' crowd, what a shame to miss out on the fun by being stuffy about reading books written for children. Their loss.

Cath, I feel I need to have a conversation with your library assistant, as one to another. Anyway, I am constantly recommending youth books to adults. There has just been an explosion of authors in the last few years and I think adults are missing out on some great reads!

I have INKHEART in my book closet and will try to trot it out soon and read it. I had no idea there was a movie coming but I'll look forward to that as well. Thanks for a very nice review!

Kay, if you've ever seen Hyacinth Bucket in our comedy series, Keeping up Appearances, then you would have some idea of this library assistant. The resemblance was uncanny both in appearance *and* attitude. Luckily, I was too amused to get annoyed.

As I said to someone else, YA fantasy books are an excellent tool to get boys and men interested in reading. My son-in-law proudly announced he'd read over 100 books last year (mostly YA fantasy) and this from someone who had reading difficulties as child and read nothing at all until he met my daughter. He likes nothing better now than to talk about the books he's reading. I think that's really wonderful.

The new movie of Inkheart has quite an impressive cast so I'm looking forward to that immensely!

I always pick this up the store - due to its fantastic cover, I suppose, but never bring it home. I see I should really give it a try. Thanks for the great review. Why did I think this was about a dragon??!

Hi Tara. I kept picking Inkheart up in the library too and never brought it home. I understand why you thought it was about dragons... the cover is something like the Eragon books by Christopher Paolini, imo. Easy to confuse the two.

I just read this one too and I LOVED it. It was such a fun read, and I always like to read books about books. Glad you enjoyed it!

Hi Susan, yes I saw that you read it too and enjoyed your review very much. If memory serves I think I left a comment too. I adore books about books and this one was unashamedly bookish and indulgent and I loved it. I have its sequel to read on my library pile and can't wait for the movie in March!

I've seen Inkheart on the library shelf numerous times and been curious, but never checked it out yet. I'm glad I read your review, because now I'm definitely going to read this book!

I was the same as you, Jeane, in that I kept seeing Inkheart in the library and was unsure about taking it out. Then I read a post Deslily made about the movie and that was it... I had to read it. So it's her fault!!! LOL.