My reading for Carl's R.I.P.VII challenge continues on steadily and I've now finished my third book, An Absolute Gentleman by R.M. Kinder. 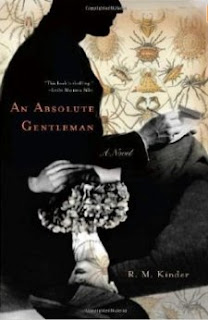 Arthur Blume is an English professor of middle age who, when he was much younger, had a book published. Since then he's not managed to have anything else published but earns a reasonable living teaching writing courses at universities. He moves around a lot. He had a very troubled childhood due to a mother who was mentally unstable. He's a serial killer.

Arthur moves to Mason, Missouri, to take up a temporary post at the university there. The people in his department are the usual hotch-potch of quirky, needy, manipulative, obsessive folk. Blume settles in quite easily and is quickly targeted by female colleagues and students who either fancy him or want something else from him. But Arthur is a student himself. A student of human nature, specialising in secrets - something which everyone has and of course the staff of the university are no different...

I haven't really said a lot about the plot of this book and that's partly because of spoilers but also it's a book where not a lot happens - until the last third or so of the book anyway. But that's not to say it's a boring book, not in any sense. I read it in under a day and found it compulsive reading to be honest.

Arthur Blume's voice, as he tells about his life and the life of his university department, is very strong. He's a horrifying man but also a real gentleman and somehow or other you find yourself excusing him. His awful abusive childhood explains a lot and we only get to hear about this in dribs and drabs, his mother was mentally unstable and although there were several men in her life before Arthur was born, it seems none of them did much to help either her or Arthur.

The other reason for excusing him is that we also see the nasty and strange side of 'normal' people and somehow, compared to them, Arthur doesn't seem so bad. I found myself having to remind myself constantly that this pleasant and intuitive man is a killer of the worst kind. How I found myself rooting for him at the end I just don't know! Good writing is the answer I think. This book is skilfully and beautifully written, there's just enough information and horror delivered, as if by drip, to keep you turning those pages, because you just know something awful will eventually happen.

I believe this is R. M. Kinder's first novel, although she has a couple of volumes of short stories available. Based on the evidence of An Absolute Gentleman she's a darn good writer and I do hope she writes a lot more.

wow.. one night? sheesh! My eyes would never let me do that even if the want to was there!

This one does sound good though! I am trying to resist no going to amazon and putting it on my wish list!... gah, it seems all the books on my wish list at the moment are pricey! Thankfully it's not like I don't have anything to read!

Pat: It wasn't quite one night, lol. An afternoon, evening and part of a morning. It was written in a way that was easy to read and kept you turning the pages.

Seems to me books have become more pricey recently. Everything I want seems to be anyway!

This review gives me the chills a bit. Probably the fact that this relatively normal, in fact seemingly likable and charming gentleman is a serial killer. It's a bit scary. Sounds like a great read though and to be honest I like a good scare - otherwise why am I reading all these RIP reviews!!
Lynn :D

Lynn: It is scary... but from what you read and see on the TV... absolutely true. These awful people do seem to blend in very well with the rest of us.A very frightening thought.

Thanks for the close reading and analysis, and for the good comments, too. R.M.Kinder

Cath, Thanks for the close read and analysis, and for the good comments, too. I left this post a moment ago, but it didn't take. If it appears twice, my apologies.

Rose Marie Kinder: Thank you so much for popping in to read my thoughts on your book and leaving a comment. As you have seen, I loved the book and am really hoping you will write more in this vein.

The reason your comments didn't show is that I have my settings set to blog owner moderation for any comments on posts that are over two weeks old. I find it helps to cut down on the spam.

Rose Marie: I'm so pleased to hear this news and wish you all the luck in the world with your new book. Perhaps you could let me know if and when it might be published... when you know that is... and don't worry, I realise it all takes ages. Good luck!