It's definitely an autumnal day here today, overcast with a slight nip in the air. Just the right kind of atmosphere for reviewing my first book for Carl's RIP VII challenge which is The Woods by Harlan Coben. 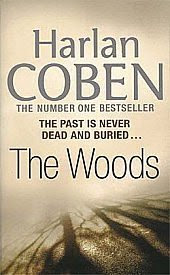 Paul Copeland is the county prosecutor for his part of New Jersey. He's a widower who lost his wife to cancer and has a six year old daughter who he is raising on his own. His family history is complicated. His sister, Camille, has been missing, presumed dead, since their teenage years. One year at summer camp she went into the woods with three other kids, two were found murdered, but Camille and another boy, Gil Perez, were never found, but were thought to have been murdered too. A man is serving time in prison, not for these killings but for other very similar ones and it's widely thought he also committed these murders as he too was a teenager at this same camp.

Paul is visited by two New York detectives. They have found the body of a male, Manolo Santiago, and think he is connected to Paul as he has newspaper clippings about him. When Paul goes to view the body he has a shock... he recognises a scar on the arm of the body and knows it's Gil Perez. He didn't die in the woods that year, instead he's been alive for the last twenty years. Paul's indentification is brought into question though when Gil's parents come to identify the body properly. They swear blind it's not him.

This is not the kind of thing Paul needs at the moment. He has a difficult case on, involving the rape of an exotic dancer by two college boys. The father of one of the boys is threatening Paul with digging into his past if he pursues a guilty verdict. Paul knows he has things to hide because he too was at the summer camp when his sister disappeared.

Meanwhile a university lecturer, Lucy Gold, has been handed in an annonymous assignment which has shocked her. It tells in detail what happened to her at the summer camp her father owned, the year of the murders. At the time, she was Paul Copeland's girlfriend and there are things she did not tell the police.

Paul has no choice but to start an investigation into what happened that year. He must get answers and find out who really murdered the two teenagers and what happened to Gil and his sister, Camille.

Well, this is my first book by Harlan Coben. My husband reads him quite a lot, a series about a sports agent who investigates crimes I believe. The Woods is not part of that series, it's a stand-alone novel. I came to read it because Amazon sent me one of those, 'You might this' emails. I read the synopsis and thought, 'Yes... actually I might like that.' I knew my husband had ordered a load of Coben books from The Book People and when I checked which ones... there it was. Bingo!

This was a good mystery. I like those that have a lot of different threads, many secrets to discover, and that twist and turn all over the place. Paul was only first generation American, his parents were Russian so there was a bit of KGB stuff mixed in with the murders of the teenagers, family stuff that had been hidden and so forth. I was less enamoured of the secondary plot with the rape case. I'm not greatly into courtroom dramas so that didn't appeal, but it was intertwined with the rest of the plot quite cleverly I thought and did keep my interest.

I didn't think the book was that strong on characterisation. Partly that's my fault. I was looking to like Paul and found I didn't very much. To tell the truth no one in the book was that pleasant. So I'm torn, I do prefer to like the main protagonist in books, but how can that always be possible? But someone ought to be likeable, people are in real life, but the closest I came to liking someone was Paul's assistant, Loren Muse. I felt she was a strong enough character to warrant her own series. In a way I think this was a typical mystery written by a man - strong on plot and action, maybe not as good with the characters. But I did like it. The mystery elements kept me guessing, I liked the gradual revelations about Paul's family, and about that year at summer camp. And a nice final twist at the very end.

I'm not sure if I'll read any more by this author. We have a couple more stand-alones which I might dip into at some stage, that's as far as I'll commit to. When I saw it was set in New Jersey I was pleased as I thought I could add it to my American states challenge list. In all conscience I can't because I really didn't learn anything about New Jersey from it, it could have been anywhere quite frankly. It does however make quite a good start to the R.I.P. VIII challenge, so I'm happy with that.

So this was also a New Jersey book for your "read a book from every state"!
I like what you said about finding secrets and such are my favorite reads (like 14th tale).

I read this review and sat here wondering why I can't write reviews properly. It's like I forget all that happens in the book the minute I am finished with it. Sooner actually. More like forgot the chapter I just read while I read the next chapter. I remember if I liked it or not but really can't say much about any one book no matter how much I liked it. That scares me more than the scary book!

btw: I am sooooo with Debo with the simpler tv and phone etc LOL.. Not saying the new techy is bad.. just saying both should be available..shouldn't have to pay for the "overkill technology" on something you won't even use!
Yup.. me and Debo on on the same wave! lol

I have not read Coben myself. Had one on the shelf and passed it on unread. My neighbor loves him like your husband. This sounds interesting because of the secrets but I have to have people I can actually like so I'm not sure if I'll read it or not.

I haven't read anything by this author, but the mystery does sound really interesting. You're right, this is a great R.I.P. book -- and I kind of like stand-alones, because I don't wind up waiting for a sequel :)

Pat: No, I decided not to use it for my USA challenge as I learnt nothing about NJ from reading it.

I wrote this review the day after finishing it so it was all fresh in my mind. If I don't do that I'm exactly like you, I forget it all. In my 'what I read in August' post at the weekend I had 7 books to talk about and I mostly had to go to Amazon to remind myself what the heck these books had been about. LOL. So it's not just you, Sis...

And you know what? I really like your reviews. They're uniquely *you* and always make me laugh. I wouldn't like it if everyone wrote the same kind of book review. Plus... I honestly do not care for overly academic book reviews. I'm easily bored. LOL

About TV remotes, if my mother was alive now I have no idea how she would cope with current ones. She needed, like Debo, one where you just pressed 1, 2, 3 and 4. I've no clue what she would do now.

Peggy Ann: Truthfully, although I did quite like it, I wouldn't run around the town screaming that everyone should read it. It just wasn't *that* great.

Col: Yes, I have to say that it is nice to come across a stand-alone occasionally as it means you're not having to start on a whole new series!

I hardly ever ready anything that would qualify for the RIP challenge, so was surprised to realize that the book I'm listening to right now actually falls into the category (The Historian by Elizabeth Kostova).

Reading crime fiction like Harlan Coben's is even more of a rarity for me.

Your review is compelling, Cath. I'll put it on my list, which is always an iffy venture, but, put it on I will. I enjoy books that have sudden twists and hidden secrets.

I've read two or three books by Coben and enjoyed them all. I usually can't put them down because I'm so curious to see what will happen next :) I haven't had the chance to read this one yet but I'm definitely going to have to!

Alyce: I hope you're enjoying The Historian. I read it a few years ago for RIP and loved it to bits.

Penny: If you like twists and secrets in books then The Woods is not a bad book to put on your list.

Samantha: I have a couple of other stand-alones which I will probably look at at some stage. If you already like his work then The Woods would be a good one to get hold of.

You just reminded me I had a copy of The Woods from a few years ago, on my shelves, waiting to be read! LOL so on to the pile it goes. Lovely review, and now I have to see if I agree with you or not about the male writing theories.....I'm not sure why I haven't read him, so I'll let you know. See, one review and already you're adding to my pile! I'll have to see if I can return the favour.... :-)

Susan: I would interested to see if you feel the same way about it as me.

Oh... I wouldn't bet my first-born on your not returning the favour. LOL! Look forward to your post when you have time for it. I know you have other things on your mind at the moment.

I have just installed iStripper, and now I enjoy having the sexiest virtual strippers on my desktop.