As well as my reading for this year's R.I.P. challenge I'm also a bit hooked on travel writing at the moment. It's a bit odd, this compulsion to read travelogues because I'm not actually that mad about travelling, especially not uncomfortable travelling. If I go anywhere I like a comfortable bed, a shower or bath and reasonable food. The idea of camping 'anywhere', tramping through a tropical rain forest or rowing up the Amazon doesn't appeal in the slightest. But... I do like reading about the people who are a lot braver than me and who do these things just for the hell of it. So far this month I've read three travel books so this is going to be one of my three 'brief' (ho, ho) review book posts.

First off it's One Man and his Bike by Mike Carter. 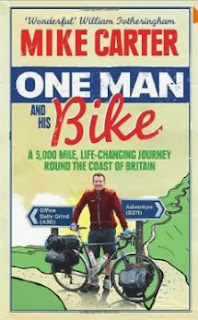 Journalist Mike Carter is rather disatisfied with his life. He's one of these people who can never settle, due, he suspects, to a slightly troubled childhood. He's therefore decided - as you do - to move to Buenos Aires thinking to start afresh. First of all though, he decides to cycle around the coast of mainland Britain... not for any particular reason... he just fancies it. People usually do clockwise but Mike decides to go anti-clockwise instead, travelling east out of London via what was the London Olympic stadium building site (the book was written before The Olympics), into Essex and thus on to Suffolk and Norfolk and up the east coast to Scotland. This really is one of the best UK travelogues I've ever read. Mike Carter is an excellent writer and he really brings this trip to life with his descriptions of life on a bike, the trials and tribulations, the weather, the people he meets. Contrary to his expectations he doesn't find a 'broken Britain', he finds endless kindness from complete strangers and an awful lot of friendliness and help. My favourite section by far is the Scottish bit. He clearly loved the country and his descriptions of the coastline, the wild stretches where he saw no one and had to fend for himself were superb. When he reached the Outer Hebrides it was like he'd reached heaven, it was delightful. After that, when he left Scotland and returned to England, the narrative lost something. He clearly felt it, as then he began trying to eat up miles instead of enjoying what he was seeing. Oddly, I'd wanted to read the book to discover his opinions of the South West where I live. But just like him, by the time he got there I wasn't that interested either and was still feeling nostalgic for Scotland even though I've never been there. Good writing is responsible for my reaction, I'm sure of it. Mike Carter made me long to visit Scotland and I think the book would have this effect on most people. Brilliant read.

Next, Up the Creek by John Harrison. 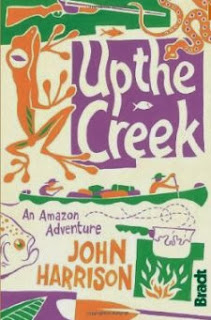 One of my recent travel reads was Brazilian Adventure, a vintage travelogue by Peter Fleming. I was in two minds about that book as I found it interesting but at the same time a trifle monotonous. I was curious to see whether other books about The Amazon would affect me in the same way. Answer: yes. Harrison was in a different part of the rain forest to Fleming: Fleming was in the southerm part, Harrison in the north. Harrison wanted to paddle up river Jari to the border with French Guiana. He chose a rowing mate and they set off. All the usual problems occurred, difficulty with narrowing rivers where portage was sometimes required, rapids, food shortages and worst of all, recurring bouts of malaria for both of them. These sounded horrendous and I wasn't surprised when his partner bailed. Eventually he finds another partner and they set off again, with all the same hazards. It really was remarkably similar to Fleming's experiences and I'm assuming that *is* Amazonian travel for you. Possibly travelogues set there are not really for me, I want more variety maybe. I think for anyone deciding to embark on such a trip though, this would make ideal reading material.

Lastly, Turtles in Our Wake by Sandra Clayton. 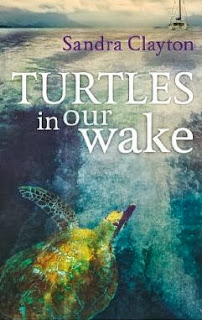 Typically with me I seem to have read the second of three books with this. Author Sandra Clayton and her husband, both retired, decided to sell their house to live and go travelling on a catamaran. I gather the first book is about how they practised sailing around British coastal waters and then sailed their boat down across the Bay of Biscay to Gibraltar and into the Med. This book charts how they had to return to sell their house because, as usual, it was problematic, and then were able to return to their boat and set off. They travelled across The Med from the Balearic Islands to Corsica, basically as way of seeing how they fared on a long trip and whether or not they might manage a long-haul across the Atlantic to the Caribbean. This was a delightful read. Sandra Clayton's beautiful writing made the islands in The Med sound idyllic, and this to someone who's never really been interested in visiting that area. I found all the sailing details very interesting, especially the behaviour of other users of the sea such as fishermen and millionaire yacht owners. It was interesting too to read about the day-to-day difficulties of being out on the water, miles from anywhere: food, fuel, weather... squalls are horrendously dangerous apparently... and how easy a life threatening crisis can occur. Sobering. I thoroughly enjoyed this, loved the ease of the writing style and gobbled it up in a day. I now have the first book on reserve from the library and there's a new one out I think, which charts their crossing of the Atlantic. I shall be reading all of them.

So the travelogue I'm now reading is a bit of a tome of a book, The Happy Isles of Oceania: Paddling the Pacific by Paul Theroux. I've not read anything by him before. I'm only about 60 pages in but already I see why he had a grumpy reputation. But it's quite good and hopefully I will make it to the end of the 700 or so pages. And of course I've already picked up a book rec: Mark Twain's Following the Equator. I've read a couple of his travel books, The Innocents Abroad, The Tramp Abroad, but I'd not heard of that one so have happily downloaded it for free for my Kindle, here. I've also downloaded the two I've read as I don't own them and would like to. I do love my Kindle.

good lord woman! You are a reading fool!! lol... I must make one comment though.. "up the creek" seems to be where I always am! heh. and let's not forget it's always "without a paddle"! naturally.

I have never read a travelogue. It does sound like you get to go so many places and never leave home though. I am definitely getting One Man And His Bike for my hubby for Christmas. He loves doing those long bike rides and I want him to look forward to our trip to Scotland as much as I am! I don't think the amazon would interest me too much either, don't like to sweat and be sticky!

Pat: Yeah, I've been motoring through books like a bat out of hell. What you say about being up the creek without a paddle... at least you're not in trouble like Paul Theroux in my current book. He put his paddle in the sea in the South Pacific and up came some jelly fish. They slid down the handle and stung him badly. If that's gonna happen I'll do without the flippin' paddle...

Peggy: I love travel books to bits. If your husband likes to do long distance cycling then I think he would love One Man and His Bike. When are you going to Scotland?

Must, must, must read the sailing biography. We almost made it to the Mediterranean when I lived on the sailboat with my family as a teenager. Lovely review, Cath. I have to get this book! I'll have to check the One Man and his bike for Toby, who likes travel books like that.

Susan: It must have been utterly fascinating to have that kind of childhood. Bearing that in mind, yes, you should read the sailing book. It might be a good idea to read the first book first, unlike me. LOL. Not that I think it matters.