August, for one reason or another was a bit of a busy month... family stuff, the garden, illness and so on. I read seven books and did not blog about one of them. This often happens to me in August I notice, almost as though I take a summer break from book-blogging and come back revitalised and ready to go in September. So here we are on the 1st. September with a book post at last... the books I read in August. I'm not going to go into great depth about these books, I simply don't have the stamina, so I'll list what I read and just say a few words.

53. Thereby Hangs a Tail by Spencer Quinn. This is book 2 in the author's Chett and Bernie series. The books are told from the pov of the dog, Chett. This one involved the abduction of a show dog and her owner and how Bernie and Chet go about finding them. It was huge fun and I enjoyed it a lot. I like this series very much.

54. A Dying Fall by Elly Griffiths. This is book 5 in the author's Ruth Galloway series. An old archaeology friend of Ruth's, living in Blackpool, is brutally murdered in an arson attack. Ruth goes north to look at the dig he was investigating to see if there might have been a connection between his work and his murder. Ruth's daughter's father, DCI Harry Nelson, is also in Blackpool on holiday but can't resist getting involved in the case. Very good instalment of this, one of my absolute favourite series at the moment. New book out in February I believe.

55. The Last Runaway by Tracy Chevalier. I think this is the author's latest book and as it was about Ohio in the 1800s I was keen to read it. Young Quaker girl, Honor Bright, lives in Dorset with her family. She's engaged to be married but is jilted and decides to go with her sister who is emigrating to America to get married. Sadly, the sister dies before they reach Ohio and Honor is left to go on alone, uncertain of her welcome at the fiancé's home. It's not a particularly warm one and the story tells how Honor copes with this, the friends she makes, the people she unwittingly attracts and the way she helps slaves escaping from the south. I thought this was an excellent read, I learnt a lot about something called The Underground Railway which is the system by which slaves escaping from the south were helped by people living in Ohio. Fascinating stuff. I also loved all the quilting and patchwork details, I'm not a quilter but, like many who have done a lot of needlework in the past, am rather interested in it and think those that do it are amazing.

56. Another Man's Moccasins by Craig Johnson. Book 4 in the author's Walt Longmire series. The body of a young Vietnamese woman in found beside a road. It forcibly reminds Walt of his time serving in Vietnam... and somehow it seems there might be a connection between the people he knew then and this murder. Excellent instalment of another of my very favourite series. This one brings in flashback scenes of Walt's time in Vietnam. I wasn't keen when I realised this was going to run all through the book, but actually I found it worked well and taught me quite a lot about that war.

57. Brazilian Adventure by Peter Fleming. The author was the brother of the creator of James Bond, Ian Fleming, and was a bit of an adventurer in his young days of the 1920s and 30s. He set off up the Amazon in 1925 with a group of men, including friends, professional explorers and native guides. This book recounts their experiences. I found it an odd mix of interesting and monotonous, to be quite honest. It got a lot better in the last third of the book when there was a race between two factions of the team to get back to civilisation. What it has done is whet my appetite to read a bit more South America so I have a couple more books from the library to read.

58. The Bloody Tower by Carola Dunn. Daisy Dalrymple is once again tripping over dead bodies. This time in The Tower of London where she's visiting friends in order to write an article on the castle for an American magazine. The dead man is a beef-eater who is not popular so there are many suspects as always. Alec, Daisy's husband, is brought in to investogate with Daisy's 'help'. Book 16 of this wonderful series and just as good as all the rest... lot of history about The Tower in this.

59. The Black Ship by Carola Dunn. Daisy and Alec have moved to a much bigger house, Alec having inherited the house from an uncle. It's not long before a body is discovered - this time it's the dog that finds it, not Daisy - and Daisy is embroiled in all kinds of shady doings that her neighbours have perpetrated in regards to prohibition in the USA. Very good this one, I learnt a lot about how alcohol was smuggled into the US from Europe during prohibition. Very interesting.

All I seem to have done last month is read from various series that I'm partway through. But that's fine, they were all good and really all I wanted last month was easy reading. My favourite book is hard to choose but I think it would have to be this: 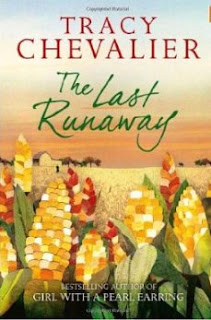 The Last Runaway by Tracy Chevalier. I do like her writing very much indeed and possibly this one appeals so much because the subject matter was very interesting to me, and I learnt a lot. So much so that it will be my first book for Ohio for my USA challenge that I'm doing for myself. It was perfect for that so I'm delighted.

As I said before, September is now here and I shall be having fun with Carl's R.I.P. VIII challenge. I've just finished my first book for it in fact, so hopefully should be blogging a bit more now.

Sounds like August was busy for you!
I enjoyed The Last Runaway too, I really didn't know much about the Underground Railway before, so I found it fascinating.

August was a bit like that for me too, although I did write about some of the books I read. But I know just what you mean about stamina! Hope the illness situation has improved.

I've got a bit behind with the Ruth Galloway series - must catch up and as for Daisy Dalrymple I'm way behind, The Bloody Tower does sound good. I thought I'd try to read them in sequence, but I don't think I'll manage that, so the next one I see will be the next one I read.

Sam: I have to confess that I'd never even heard of the Underground Railway before I read this book. And it was wonderful to get so much info about it out of reading a fictional book.

Margaret: The illness situation comes and goes. It's not serious but I'll be seeing the dr. next week to see if something can be done.

I honestly don't think it matters with Daisy whether you read them in order or not. There is progression in her private life but it's hardly difficult to follow or fathom.

Thank you! You too.

A lot of people have been reading The Last Runaway, so I think I might look for it to try. It sounds interesting. I love quilting, too, though I don't do much of it at the moment.

You read a good selection of books, Cath, and sometimes that is just what is needed. I'm busy catching up in my mystery series too. I loved the Ruth Galloway, and am enjoying Peter Lovesey, Peter James, and Louise Penny right now. I think I will do a blog like you did here, with some quick reviews. I am so far behind on those this year!

I hope you are feeling better and it's nothing serious, Cath. Hugs.

Susan: I think you would love The Last Runaway, it was the perfect mix of history and human relationships, for me.

I just didn't feel like blogging much in August. Plus, when you're reading from series it feels silly to review every single book. This way worked nicely for me this time.

Yes, a little better thanks, it's an ongoing thing though, so I need to get it seen to and will see the dr. on Friday.