I've made a start on this year's R.I.P. challenge with a crime thriller, Carved in Bone by Jefferson Bass. 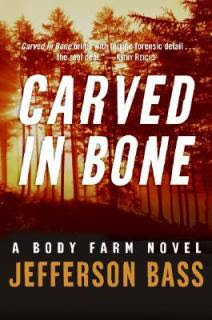 Dr. Bill Brockton is in charge of the Body Farm in Knoxville, Tennessee. This is a place where human corpses are left exposed to the elements so that scientists can study what happens to them. The doctor is called to a cave in the nearby Great Smokey Mountains where a body has been found in a cave. As it has been effectively sealed off from the outside air the remains are mummified: it's one of the strangest case he has ever encountered.

The cave is in Cooke County, a rather remote area, where there's a history of lawlessness and criminality, and corruption within the official law that does exist. Dr. Brockton senses immediately that the local sheriff is hiding something in connection with the body in the cave, but getting him to reveal what he knows will require some ingenuity on his part. And what part does Jim O'Connor, a man with a ciminal past, play in all this? Despite himself the doctor is drawn to O'Connor and trusts him over the sheriff. What he doesn't realise is how dangerous this tangled web of a case is going to become and how much his personal safety will be jeopardised.

The author, Jefferson Bass, is in fact two authors in one... Jon Jefferson, a writer, and Dr. Bill Bass, a forensic anthropologist. Dr. Bass did actually work at the University of Tennessee and founded The Body Farm. There are nine books in the Body farm series and Carved in Bone is book one.

For me, the best thing about this book was the setting. We drove down through that area - The Great Smokey Mountains of East Tennessee - on the way from North Carolina to Memphis back in 2006 and thought it was stunning. So this was a nice reminder of that holiday and the authors convey the beauty and sense of isolation very well indeed. I had no idea that one of the biggest cash crops there is marijuana, grown quietly in isolated valleys where law enforcement can't find them.

Storywise I found the plot interesting but the writing and background a bit 'blokey'. I've come across the 'male, middle-aged main character who has countless much younger women chasing after him' scenario before. I know this does happen in real life sometimes but for some reason I can't help but find it rather eye-rolling every time I encounter it in books. I think I must be a really cynical old lady. But really... the mystery of the body in the cave, who she is, why she was murdered etc. is more than strong enough to hold up on its own, especially with that glorious setting... for me personally, the romantic subplot was superfluous. Your mileage may vary, as they say.

The book is peopled with some very colourful characters too, so there is plenty of interest, plus a few amusing scenes here and there as the doctor is taken to various mountain locations and has to cope with some peculiar situations. He's out of his comfort zone and it was fun to read about.

I shall probably read more in this series as there was enough about it to like and it is, after all, a first book. I try to cut a bit of slack for a first attempt.

well I found the book for one penny used and sent for it so I hope I like it! I think they made a movie about this place.. it seems very familiar to me, and I doubt I read the book! hmmmm. oh well I'll find out! lol I am about 130 pages into The Woman Who Walked into the Sea and the writer is quite good! So I am glad I got this one. I had it on my wish list after you reviewed it.

It sounds different - and interesting, despite the 'blokeyness'! It was a plus for you knowing the area.

I've had this series on my radar for years. Several mystery authors have used the body farm concept in books and I find it really interesting that one of this pair of authors is the actual 'founder'. Understand what you mean about the 'guy' thing. I find it annoying at times and don't seem to notice so much at other times. I might suggest this series to my husband though. He would like that.

Very interesting. I have this book but have never read it. The location sounds very appealing and I have always liked forensics of this type, although it can get gruesome. I am glad you reminded me of it.

Even though I lived my first twenty three years in Alabama, I have been to Tennessee and the Smokey Mountains only once (camping) and it was very beautiful.

Pat: I think you'll like all the descriptions of the area... certainly took me back to when we were there. Do you think you might have seen Stephen Fry's doc all about his travels to every state... or read the book? Because he went to the Body Farm. Could be why it's so familiar. Glad you're enjoying The Woman Who Went into the Sea. Such a lovely setting on the Scottish coast.

Margaret: It was certainly different. I liked the premise of finding a mummified body from 50 years ago in a cave. It was interesting.

Kay: I too found it interesting that one of the authors is the actual founder of the Body Farm. Like you I find the guy thing annoying at times and others, not. Not sure why that is. LOL!

Tracy: The area is stunning and for me that made the book. The case and investiagtion of it was also good but a lot of the background stuff felt like padding to be honest.

Sounds rather interesting and engaging and, of course, the setting is right up my alley.
I'll put this one on my list and hope to find it sometime soon.

Penny: The setting is the best thing about the book and it's very well depicted.