I did a quick flit around several charity shops yesterday while my husband was at the drs. I wasn't holding out a lot of hope as I tend to look for more unusual books, the usual I can find in the library generally speaking. But Marie Curie and Cancer Research came up trumps. Really delighted with the four I found. 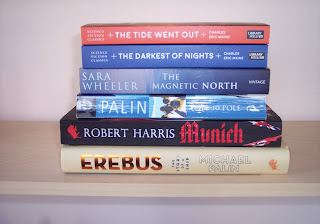 Erebus: The Story of a Ship by Michael Palin. This is basically what it says on the tin, a non-fiction story of the history of HMS Erebus, the ship that was involved in the ill-fated Franklin expediton of 1845. This one has a beautiful front cover too.

Munich by Robert Harris. This one is based around Chamberlain's efforts to prevent World War 2 and is, I gather, rather good.


Pole to Pole by Michael Palin. Based on the TV series where the intrepid Palin travels from the North to the South Pole along the line of longitude, 30 degrees east.


The Magnetic North: Travels in the Arctic by Sara Wheeler. This charts the author's travels around the Arctic Ocean and the lands which surround it. This is also rather good I've heard and also has a nice cover.

The last two books are not charity shop buys but were sent to me by the British Library publishers for review. They're two science fiction volumes, The Darkest of Nights and The Tide Went Out both by Charles Eric Maine. Nice covers on these too.

The charity shop buys seem to centre around my love of reading about cold places... generally mountains... I haven't read a lot about Arctic and Antarctic exploration, looks like I'm about to start. Anyway, very pleased with my book haul (especially as I was actually looking for jigsaws) and rather fancy I should troll around the charity shops a bit more often.

You had a great time with getting 'new to you' books too. How fun! I love reading about Antarctica - not sure why - never want to visit there. Enjoy!

I love it that you look for more "unusual" books. And also the older ones. Tom raced through all the Michael Palin travel books, but I think the only one I read was the Hemingway one. But I did watch all the tv shows. I miss them. I don't expect he travels so much now. I just saw Erebus somewhere online, and told Tom about it. I haven't heard of Maine, but aren't you so lucky to receive them?!

Cath, we are in a book buying mood! And yes Munich is rather good - at least I thought so. I've watched all of Michael Palin's programmes and we do have some of his books. Happy reading!

Nan: Unusual is good. And you can find some real gems sometimes. Michael Palin did North Korea last year but that was the first time in ages. He's still incredibly watchable and how nice to see older people on TV.

I don't take very many ARCs as bookblogging then ends up feeling like a job and I don't want that. But I saw a post on Twitter from the science-fiction arm of the British Library asking for volunteer bookbloggers to read and review their new books, so I volunteered.

Margaret: I think I'm always in a book buying mood! I've had several recs for Munich so when I saw it there I nabbed it. The library has it but it never seems to be in.. which says something in itself. And all it cost me was £1... it would cost me 75p to reserve it from the library.