The Year of Living Danishly


The Year of Living Danishly: Uncovering the Secrets of the World's Happiest Country by Helen Russell is my 10th. book for the European Reading challenge 2019 which is being hosted by Rose City Reader. 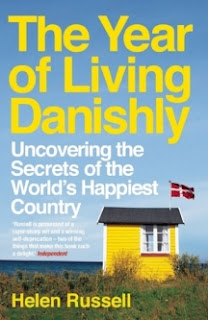 Helen Russell and her husband lead busy lives in London, both with high-powered jobs. Helen sometimes wonders if it's all worth it as their quality of life is not what it should be, everything being dominated by work. Then her husband is offered a job with Lego in Denmark, just for a year. He wants to go but she resists at first, she's really not adventurous, it's too big a change and she suspects it would entail a huge culture shock.

Eventually, Helen gives in and agrees to go but first she does some research and discovers that Denmark has been named the happiest country in the world. This sounds like something that needs investigating and she is more than up to the challenge. Freelance journalism calls as opposed to her previous full-on magazine job and she can use her new career to find out why the population of Denmark is so happy.

Arriving in Denmark in January is the first shock. Where are all the people? Why are the streets empty? The simple answer is, 'Hygge'. This is the Danish concept of being at home, warm and cosy, with family, in the depths of winter. And that's exactly where everyone is: indoors. They do however meet some of the neighbours when two men knock on the door at 8am to tell them they're doing the recycling wrong and proceed to take them outside in the freezing cold and demonstrate how it should be done...

Helen soon discovers all kinds of things about the happy Danes. They love beautiful design in their daily lives, minimalism etc. They like to obey the rules as they believe it makes people feel safe. They trust everyone, so babies are left outside shops, something you don't see in the UK any longer but was quite common when I was a child. They love hobbies and pastimes and joining groups for said hobbies is hugely popular in Denmark. Autopsies are apparently very popular too. Yes autopsies... on animals... and it's especially popular to take your children along to watch them. You can't fly foreign flags in Denmark, there is even a list of 'flag rules'.

Of course, Danish crime dramas such as The Bridge and The Killing have brought Denmark into our living rooms - although not mine as they're not my cup of tea - but strangely one the most popular crimes series in Denmark itself is, Midsomer Murders. Go figure...

Anyway, I thoroughly enjoyed this intimate look at life in Denmark. Helen Russell writes informatively, candidly, but also very conversationally of the difficulties of assimilating herself and her husband into a country where they can't speak the language (although thankfully English is widely spoken) and don't immediately get the mindset. It takes effort and, all power to her elbow, she's willing to put plenty in.

One of the things that does come as a bit of a surprise to them is how rural the coastal town of Billund, in Jutland, where Lego has its headquarters, is. Copenhagen, the capital, is very cosmopolitan. Helen and her husband lived in London, also extremely cosmopolitan. They were very unprepared for such a rural culture shock and I think this made their adjustment much more difficult. I felt for them I must admit, especially her because of course her husband had his job to go to where he met new people and had automatic acquaintances: Helen as a freelancer working from home, did not and I think she felt the isolation quite badly.

I've read quite a lot of these books about people moving to foreign countries... more often than not it's Brits or Americans moving to France, Italy, Spain. Denmark's a bit unusual so for me it was especially interesting and is one of the best I've read. I feel like I now have a really strong sense of Denmark and its people, their culture, the landscape, the weather and so on. Highly recommend this if you like this kind of non-fiction as I do.

I wonder how welcoming the people were. From what you wrote, it feels like it is very insular. I read an article a while back about someone going there and not feeling very welcomed. Maybe if you are born there, you're all set. I wonder how they do with immigrants coming in, or maybe none go there?
I've seen British television - probably I'm thinking of Call the Midwife where babies are left in their carriages outside stores. It seems unimaginable now.
Oh, I just may the very last fan of Midsomer Murders! I had watched the first episode in the past, probably twice - and did not like it. I really didn't like the music and I didn't think I could bear it episode after episode so I never got any further. Well, this year I gave it the old school try and just turned down the volume on that first episode when the music was too much! I got to the next one and the next and found someone else must have thought the music was too much and it was toned down a lot! I began to love it, though an early episode was a bit too much when Anna Massey tried to kill Joanna David! But since then, I am merrily off, watching an episode or two each evening and thoroughly enjoying the writing, the acting, the famliy life of Barnaby. All quite wonderful.

Sounds good. And good grief, it deserves to be read just because of that clever title if for no other reason. I love good puns.

So many books... so little time (for a slow reader!)

Nan: It felt to me like the Danish are a very self-contained people, a bit as though they don't really need immigrants so don't feel the need to welcome them and are perahps not all that interested in the ones that do come. At the time the book was written there weren't many but that may have all changed last year, I don't honestly know. I was put off by all the obeying of the rules, I'm not great at that, I was at the front of the queue when the British bloody-mindedness was dished out. LOL

Midsomer Murders is one crime series that I've never managed to get into but reading your story it sounds like I ought to give it another go!

Sam: Yes, a very clever title indeed, and a pretty good book too.

Pat: Oh right, I didn't realise that you'd read In the Garden of Beasts. Did you review it?

Well, judging just by me, I think it might be worth a try. Every actor is in it at one time or another! Horowitz wrote a lot of the scripts. In fact, that is what got me thinking about watching. In The Word is Murder (at least I think that's the one) he talks of writing MM episodes, and I thought I really do need to give this a good try. So glad I did.

This sounds excellent! I'd definitely be up for learning more about what makes Denmark the happiest country. Sounds like it has a lot to do with simplicity - a lesson most Americans definitely need to learn, me included. My husband's dream job would be to work with LEGOs all day!

Susan: Yes, simplicity but a lot of other things too. The State makes them feels very safe by looking after them from the cradle to the grave. It costs, but it creates happiness. A very interesting book. My grandson (13) would be there with your husband! LOL