Over Sea, Under Stone

Carl's Once Upon a Time III challenge doesn't finish for another week or so, (*where* have the last three months gone?) and I'm still busy reading for it, even though I've already read my five books. To tell the truth I really wanted to read all of my pool and even though that's not going to happen, it's sort of nice to carry on until the finish date. Anyway, book eight for me was Over Sea, Under Stone by Susan Cooper.

Great Uncle Merry is a bit of an enigma - always here, there and everywhere, off on some mysterious quest or other - and there was something about him that made his family, the Drews, reluctant to ask where he'd been or what he'd been up to. He hires a house in a Cornish fishing village, near St. Austell, one summer, and Simon, Jane and Barney and their parents go to spend the holidays with him.

One wet day they go exploring in the house and find a door, hidden behind a wardrobe, that leads to the attic. Picnicking up there, Barney throws an apple core away, goes to retrieve it, and discovers a scroll in a hidden cranny. It turns out to be a map, but the children can't make head or tail of it as the language is ancient and the condition of the scroll, very poor.

An adventure begins as they start to unravel the meaning of the script and solve various clues. It appears the map on it might be the coastline around Trewissick, where they're staying, but it isn't quite the same. Jane finds a local guide book, with a proper map, in a locked trunk, and takes it off to the vicar who she thinks has written it. Only the author is long dead and the current vicar feels sinister to Jane and overly interested in why she feels the coastline is all wrong.

The children confide in Great Uncle Merry who is stunned at what they have found and explains the danger they are now in. Other people are after this very same scroll and want the object it points the way to. There is no time to be lost as they desperately try to solve the clues and avoid the sinister bunch of people who are menacing them in order to get hold of the map. Who is friend and who is foe also becomes a complicated issue and the children find themselves thrown back on their own resources as the adventure reaches its climax.

Well then, this a children's book from the 1960s - 1965 to be precise, when I would have been 12. A perfect age for this book and I can't work out how I came to miss it. I'm certain I would have adored it, quite frankly, and it probably would have made my '15 books that have stayed with you' list. So, here I am, a middle-aged grandma reading it for the first time, beaten to it by my grandaughter in fact, but loving it to bits all the same. And it no doubt helps that the story is set in a Cornish fishing village, although I don't know the St. Austell area well. I tried to place it - Mevigissey would be the obvious choice but it didn't feel like that village to me, it felt much more like Mousehole... and maybe the author didn't have a precise place in mind. Who knows? Or cares? It was pretty darn accurate as regards atmosphere, I could smell the sea, hear the gulls, feel the wind in my hair and the sun on my face. Wonderful.

Not only that, the children felt like children and I reckon Susan Cooper had met my uncle John when she created Great Uncle Merry. Oh, wait a minute... he wouldn't have been old enough then. Never mind. *g* The author also got older Cornish people spot on. The dialect was perfect, and that's *very* rare, and I had to laugh when she had the housekeeper singing hymns as she did the housework, because that was exactly what my gran used to do... 'The Lord is my Shepherd' and 'Abide with Me' were her favourites, and the song, 'Red Sails in the Sunset'. People just don't sing like that any more it seems to me...

I can't find any fault at all with this children's book, to be honest. I realise how biased I am and all, being Cornish, so maybe I'm not a the best person to judge, but a couple of people mentioned at one stage that actually this first book is not the best of the series. Goodness! The rest must be pretty special then if that's the case. Luckily, I have book two, The Dark is Rising, ready to read pretty soon... I want to finish Terry Pratchett's Bromeliad series before I read that.

Anyway, cue entirely superfluous photo of the sea off the coast of Cornwall: 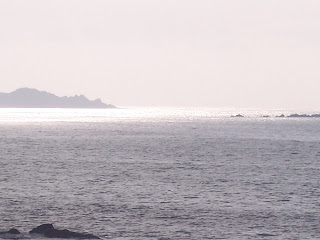 I have this set of books in that humungous tbr pile! Glad to hear that it's entertaining Cath!!

I'm pretty certain you will love this, Pat.

I missed this as a child too, but found it when my son was about 11, so read it then (he's 37 now, I'm a bit older than you!). I then read more of Susan cooper's books and loved them.

The first book was indeed my least favourite, but I loved it still. It's good to hear she got the atmosphere and the local details right! Can't wait to hear what you think of the others.

That's an interesting cover for that book... I really must read this series. I stalled on book one!

Hi Margaret. It seems quite a few people missed them as children but at least we caught up with them eventually. Your eldest is not very much older than mine - she's 35.

Nymeth: I'm really looking forward to reading the rest. Yes, SC really did get the atmosphere just right. The day of the floral dance especially. I went to the one in Mousehole several times as a young teen and it was just as she described.

Kailana: judging by your tastes I think you would really like this series.

I'm seconding Nymeth comment that the first book was my least favourite in the series, and as you say, it's pretty darn good even so! I'm looking forward to rereading the lot around Midwinter this year. (Unless I forget, which is a possibility. I forgot last year.)

It's wonderful to hear how well she's captured the atmosphere and details. ^-^ I didn't know that. You're making me all exciting about rereading these books now and December is months away!

Shanra: Midwinter reading sounds like a lovely idea. I even did a list of winter/snow type reads which you can find on my sidebar. It's not comprehensive... I'm sure there are *many* more around.

Yes, Susan Cooper must have lived in Cornwall I think, to capture the atmosphere so perfectly - or at least holidayed there regularly as a child. I was really lucky to have been raised there, though at the time I wasn't so sure!

I really enjoyed your review, Cath! wonderful. And that photo at the end - that took my breath away.

I'm glad to hear the dialog and the mannerisms are true, they felt like it while reading the books. Oh, you have such good scenes in store for you over the coming books! Like you I came to them late (as you know from Nymeth's and mine recent reviews) and I am so glad I read them at last. I'm anxious to see how you like the next volumes!

I loved this book. I need to read the whole series again. The cover image you posted is one I haven't seen before- is it from an older edition?

Susan: I'm glad you liked the photo, not sure how the colours came out like that, the light must have been just perfect.

I really can't wait to read the rest now.. the problem being that I have three really good series on the go at the moment, Mercy Thompson, The Black Jewels and now The Dark is Rising. When we've read Last Rituals I shan't know which to choose next! lol.

Jeane: this edition is the Puffin (junior arm of Penguin) edition from 1976. I bought it from a secondhand books market stall. I just have the first two and am considering buying a really nice boxed set to complete the collection.