So what's this, week five of lockdown? Not only am I losing track of what day it is I've also not much clue how long we've actually been in lockdown!

Well never mind, chin up, it's time for another round of Bookshelf Travelling for Insane Times which is being hosted by Judith at Reader in the Wilderness.

1. Home.
2. Books in the home.
3. Touring books in the home.
4. Books organized or not organized on shelves, in bookcases, in stacks, or heaped in a helter-skelter fashion on any surface, including the floor, the top of the piano, etc.
5. Talking about books and reading experiences from the past, present, or future.

Whatever you fancy as long as you have fun.

Today's Insane posted was inspired by Cathy at Kittling Books. She posted a review of Gerald Durrell's The Stationary Ark, written by him in 1976 and it reminded me that I have these: 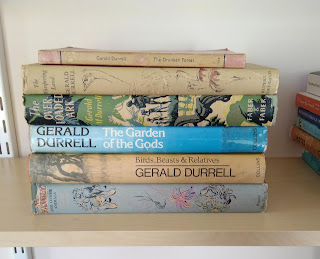 Like a lot of people of a certain age, I grew up with Gerald Durrell. He was on TV collecting animals in documentaries, a larger than life sort of chap with very decided opinions about what was happening to the planet's wildlife. But as well as that, if you were a keen reader, perhaps aged 13 to 16, and had either grown out of children's books or had read all the library had to offer then Gerald Durrell was often what you were coaxed into. (Not to mention Agatha Christie, Georgette Heyer, Hammond Innes and John Wyndham, in those days there really wasn't any such thing as Young Adult fiction.)

Anyway, the first three books are known as The Corfu Trilogy, portraying life with the Durrell family when they moved to Corfu in the 1930s.

I've read two, My Family and Other Animals and Birds, Beasts and Relatives. Loved them both so I must get around to The Garden of the Gods. And of course there is now a TV series called, The Durrells.

Of the other three books I've read two. The Overloaded Ark and The Whispering Land. As will be seen from my review the latter is beautifully illustrated. The Overloaded Ark charts Durrell's first animal collecting expedition to the Cameroons in Africa and The Whispering Land concerns his trip to Argentina. The third book, The Drunken Forest, which I've yet to read, covers a trip to Northern Argentina and Paraguay. As a teenager I read various other titles too, A Zoo in my Luggage spring readily to mind and also as an adult I've read one or two titles from the library.

Of course, after a while Durrell opened his own zoo on the island of Jersey and collected for this rather than for other people's zoos. His became more about conservation and he pioneered a different, more animal-centric, kind of zoo which still exists today.

Durrell is one of my favorites. Such a fun storyteller, and of course i love reading about the animals. You've reminded me I have a few on my shelf still yet unread. The tv version about Corfu has been pretty entertaining too.

Sticking to one author eh?... hmmm, I've been doing that too! lol

And here I read The Stationary Ark because I was missing my visits to the local zoo-- especially with so many babies coming out of the nursery and into their exhibit spaces. Little did I know that I'd have you perusing your own shelves!

I haven't read anything by Gerald Durrell or Lawrence Durrell, and I get them confused. Any of these books sound like good reads.

I am having the same issue with not knowing what day it is, except on weekends because my husband is not working.

And your new header photo is very nice, what is the plant called?

Jeanne: It strikes me that Gerald Durrell is a very good storyteller. I'll bet he was hilarious in real life. I'm slightly tempted to reread My Family and Other Animals as it really is a gorgeous read.

Pat: No, I haven't been reading just one author, this is just for the meme, showcasing a few books on my tbr pile, though I've actually read most of these.

Cathy: See, you never know who you're inspiring when you have a bookblog!

Tracy: Gerald Durrell basically wrote wildlife books and his older brother, Lawrence, was much more of a literary writer, I gather though that he encouraged Gerald a great deal in his writing. I haven't read anything by Lawrence but plan to at some stage.

My new header photo is of some bluebells in our garden. It's one from a few years back.

I never knew of the Durrells before that television series featuring the family adventures in Greece. The series was shown by PBS in this country last year, and I have to say that I was fascinated by Gerald Durrell in particular. I've since read a couple of his books, and plan to read more when I can work them in. I only wish I had discovered the Durrells sooner

Beautiful bluebells and beautiful books!
and my purse is safe as Gerald Durrell is a favourite ..lovley
Have you read or seen Durrell in Russia? I enjoyed that one too.

Ha Ha guess who spelled Lovely wrong ....
I think I have Bitter Lemons by Lawrence Durrell somewhere... I think I found it an easier read than his novels.

Sam: It's funny how people who're household names in one country can be so unknown in another. Yes, do try more of his books, I think you would enjoy his humour.

Val: Thank you, the bluebells are from a couple of years ago but are looking nice this year too.

Glad your tbr pile is not going to increase because of me for once. No, I haven't read Durrell in Russia. I've read quite a few of his books but there are still a few gaps. Will reserve that one from the library when they reopen.

I need to try something by Lawrence Durrell, I think he set his books (or some of them) in Greece? And that appeals to my armchair travelling personality.

I'm not familiar with Durrell but I think I would like his opinions towards wildlife.

Hi Cath,
I was so interested in your comment about there being no YA fiction, and how well that resonated with my own experience. We sort of morphed into romantic suspense and some sci-fi and some biographies and such, but it was an odd mix. A young person really had to start with some adult fiction. At 13 and 14, I got into reading A.J. Cronin, Nevil Shute, Phyllis Whitney, and the gothics, etc. I did not read Durrell back then, though I was aware that some young people were reading him. And much more recently, the BBC/Masterpiece Theatre productions of some of these novels have been about, though we haven't yet watched them.

bermudaonion: Gerald Durrell was very much ahead of his time as regards wildlife conservation. So interesting to read what he was saying back then and being ignored and consider how we now take his methods and use them as a matter of course.

Judith: Yes, it was odd. It was up to teachers to take the keen readers and steer them towards adult fiction that wasn't considered to be too racy! LOL! I read loads of Hammond Innes and John Wyndham which led me on to American science fiction novels... and then Star Trek happened and I was smitten.