It was a beautiful day yesterday and we weren't on grandson duty so my husband and I took off for the day. Our first port of call was the market at South Molton where we picked up local cheeses, new season's garlic, fruit and so on. I always look at the books there but this time found nothing I wanted. Not wanting to go straight home we picked up some sandwiches, bought sausage rolls from the WI stall and headed off to the North Devon coast for a picnic on the beach. We ended up at Northam Burrows which is just next to the town of Westward Ho! We sat here: 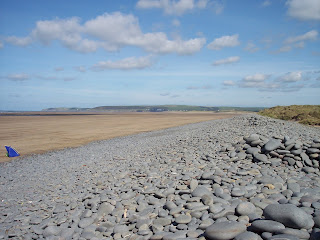 And this was the view of Hartland Point: 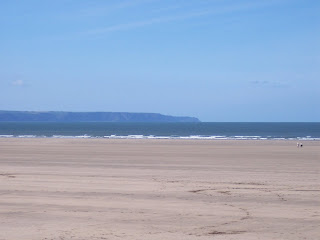 After a brief stroll we decided to visit Bideford, a town we haven't been to since we'd lived in North Devon from 1987 to 1995. When we got there however they were expecting the Round Britain bike race, had roads closed off and the traffic was chaotic so we made a swift exit! Drove down the coast for 40 minutes and ended up (it was one of those 'follow your nose' sort of days) in Bude in North Cornwall. We grabbed ice-creams from the café and discovered the coastal path up onto the downs, which we didn't know was there. That's the nice thing about Bude... the town itself is a bit unprepossessing, but the coast is full of nooks and cranies and there's always something new to be discovered. 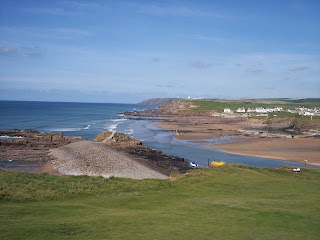 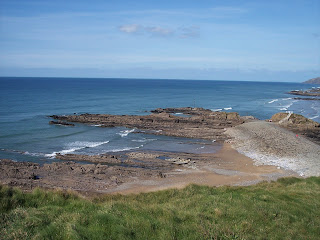 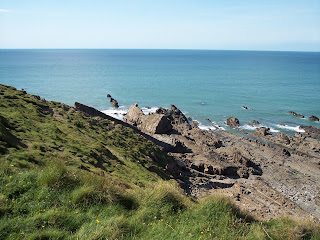 At the top of the hill: 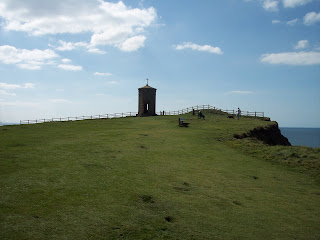 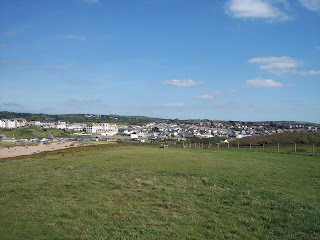 Looking west, down the coast. I'm not completely certain but I think the very last headland is probably King Arthur's castle at Tintagel. This pic puts me strongly in mind of Over Sea, Under Stone by Susan Cooper: 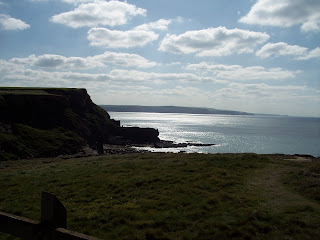 In this photo the communications satelites at Morwenstow are clearly visible on the far hill. The village itself is in such a beautiful wooded valley. 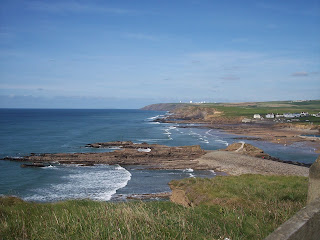 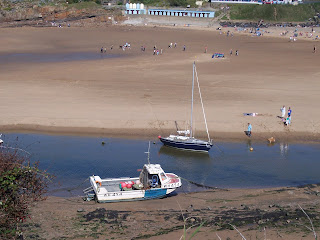 Blackberries in the hedgerows. 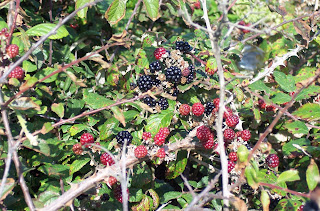 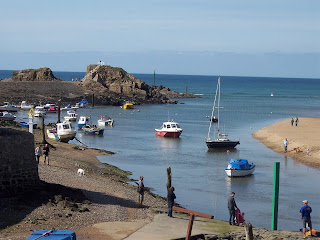 Back along the canal to the carpark: 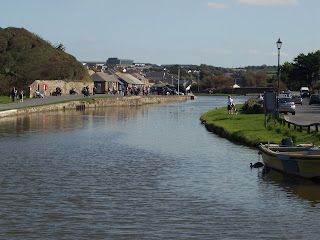 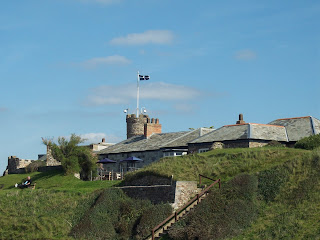 Looking back the way we'd come... over the lock gate etc. 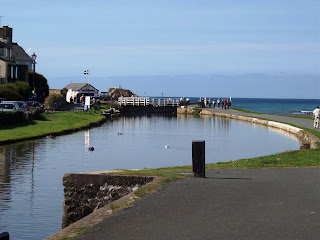 Definitely one of the nicest days out we've had in a long time. And we definitely plan to go back again soon. A good windy day when the sea is up would be just perfect. The plan is to start in Bude next time and work our way down the coast to Boscastle (where they had the awful flood several years ago) and Tintagel.
Posted by Cath at 23:08

My husband and I were looking at these photos. He remembers Lynmouth, Bideford, Barnstable, and Ilfracombe, he says all in North Devon. so looking at your photos brought back memories for him! I just loved the view and daydreamed about being there. He says he could retire happily there :-D

So I hope the windy day comes soon so we can see some more pictures! thanks so much for posting them, Cath :-D

So pretty! Some day I want to visit England & Wales. Maybe if I'm a good girl ...

Funny that you mentioned Over Sea, Under Stone - I'm just collecting copies of The Dark is Rising Sequence for a re-read & that's the one that came this week & is on my desk. Thanks for the beautiful pictures.

Oh, I'm so jealous! If I could click my heels together three times and wish hard enough I would so be there right now! :) Thanks for sharing--at least I can fantasize.

Wow, some of those pictures could EASILY be here. How cool! Anyways, overall they were fantastic. It wasn't very nice here, so I am jealous of your weather!

Absolutely lovely! I grew up in Devon and spent most of my holidays in Cornwall. We stayed in Tintagel last year and visited Boscastle twice this year - amazing cliff top scenery.

So beautiful.. so very beautiful Cath. I am happy P is retired and that you get to take outings where you just go and enjoy the beauty. As we spoke of once before, I don't know why i cry when I look at them... because they are so very gorgeous.

A picnic on the beach! Sounds like a perfect day :D As always, beautiful photos. And I can definitely see why that one reminds you of Under Sea, Over Stone.

Susan: Really pleased that my photos brought back memories for your husband. A friend on FB said exactly the same thing! Worry not, we shall be out and about again soon now autumn is here.

Caitlin: glad you enjoyed the photos, I hope you make it to England and Wales one day - Wales is a very beautiful country.

I'm collecting The Dark is Rising series too, but have come to a halt at Greenwitch, which I'm having trouble finding. Loved the first two books.

Danielle: I really think it's time someone invented a Star Trek type transporter so we can all go where we like!

Kailana: I always thought every country was unique until I went to the USA and France and saw places there that are exactly like England. Parts of Pennsylvania are so like Devon that it's quite disorientating...

Verity: it's so nice that you like Devon and Cornwall so much still. The two counties are very special to me and I feel really fortunate to live here.

Pat: yeah, we're so very lucky to be retired and have the time (sometimes) to get out and just soak up the beauty. Just sitting peacefully and enjoying the view is our kind of thing. That and ice-cream. Heheheh.

Nymeth: it was indeed a perfect day - one that will stay in the memory. Glad you enjoyed the photos.

Looking at these photos, I can see why it was a good day. Gorgeous!

What a beautiful area!

Book Psmith: it turned into one of those unexpectedly perfect days. Funny how you can never predict when those will happen.

Susan: I know I'm very biased but yes, it is very beautiful down here in the SW of England.

Ooo, I love "King Arthur's castle at Tintagel". That photo is stunning.

The photos are really pretty...you are very lucky to be living near such gorgeous scenic places :)

xalwaysdreamx: that's my favourite as well. :-)

Vipula: thankyou I'm glad you liked the photos. Yes, I know how lucky we are to live in this area. People pay hundreds of thousands of pounds to move down here and we live here already.