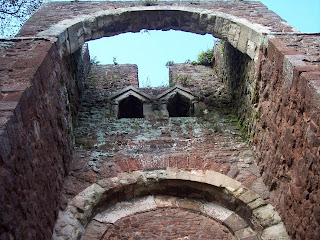 'My dear.' said Mrs. McArthur to me - it was in the early days of table-moving, when young folk ridiculed and elder folk were shocked at the notion of calling up one's departed ancestors into one's dinner-table, and learning the wonders of the angelic world by the bobbings of a hat or the twirlings of a plate, - 'My dear,' continued the old lady, 'I do not like playing at ghosts.'
~~Dinah Mulock

I was planning to do railway ghost stories today but, partly, I ended up with less time than I thought this weekend and not much time to be photographing books, but also I decided I rather fancied reading some ghostly/macabre stories by women instead. It has to be said that male authors get most of the publicity when it come to well known ghost stories, but, the fact is that 'women' were, and still are, among the best writers of supernatural tales and more than hold their own in the genre.

So, I dug out my copy of Victorian Ghost Stories edited by Michael Cox and R.A. Gilbert, and went for something early - The Last House in C-- Street by Dinah Mulock (Mrs. Craik), written in 1856.

This one starts with the narrator professing not to believe in ghosts but also suggesting that an open mind should be kept as she relates a story told to her by an elderly friend, Mrs. McArthur. The story dates back to the late 18th. century when she was a young girl, in love with a Mr. Everest, and in London with her parents so that she could be with him for a few weeks. Her mother is just a few weeks away from giving birth and suddenly decides she has to return home. The girl wants to stay and Mr. Everest persuades her father to stay with the girl for a further few days. A mistake as it turns out...

Writing as 'Mrs. Craik', Dinah Mulock (1826 - 1887) is best known for the novel, John Halifax, Gentleman but the book I own by her is An Unsentimental Journey Through Cornwall, which I absolutely love. There's no doubt about it, she was a superb writer and this short ghost story proves it. It's not that the story is terribly frightening, it's not, the joy here is in the journey and the dialogue and the lovely way she captures an old woman's rambling reminiscences. Delightful... and the story is here if anyone would like to read it.

Then I turned to The Virago Book of Ghost Stories edited by Richard Dalby.

The first story I chose from this one was The Shadowy Third by Ellen Glasgow, written in 1916. The narrator of this American story is a newly qualified nurse. She is called upon by a surgeon that she idolises to become night nurse to his wife of one year. Not knowing why his wife is bed-ridden she packs her bags and goes to the surgeon's house. While waiting to be received a young girl comes into the room chasing a ball and the nurse sees her again as she's being shown into the invalid's room. It soon becomes apparent that the household think the wife is losing her mind, but the nurse knows full well that this is not the case...

Ellen Glasgow (1873 - 1945), an author unknown to me, was apparently one of the foremost female American writers of her time, along with Edith Wharton and Willa Cather. This excellent story proves why - its air of menace is quite disturbing, especially as you, along with the nurse, know exactly what's going on. A nicely written piece and here if anyone wants to read it.

Next up, Sophy Mason Comes Back by E.M. Delafield, written in 1930. This one tells the story if a young English girl, Sophy Mason, who works for a French family in France, looking after the children. Sophy starts an affair with a neighbouring farmer's son and to her horror falls pregnant. She begs the son to marry her but he won't. What happens next is only discovered many years later when one of the children is grown and married and the narrator of the story (retelling it to a group of women) goes to stay with him in the holiday home where the events of the story happened.

I wanted to read this one because I'd enjoyed E.M. Delafield's novel, The Diary of a Provincial Lady, so much and was curious to read something else by her. And this one doesn't disappoint, it being part ghost story, part mystery, part commentary on the human condition. It works very well and I liked it very much.

On No Account, My Love by Elizabeth Jenkins, written in 1955, is really about the passing down of family characteristics from one generation to another. It seems the narrator's great-grandmother, widowed and left with several children, opened a girls' boarding school. Family legend has it that she was a real tyrant and made everyone's life a misery. The narrator, Elizabeth, has prejudged the issue but is forced to think again when an incident occurs with a medium who gets messages in the night and writes them down.

Odd little story this. Beautifully written, poignant, interesting. Not particularly scary, though it could be if you thought about it too much. The author, Elizabeth Jenkins, was apparently most famous for her biographies of people such as Lady Caroline Lamb and Jane Austen.

I then thought I'd try a few modern 'scary stories' by women to see how they compare. I don't own very many (if any) modern anthologies so had to nab one from the library. Gathering the Bones edited by Ramsey Campbell, Jack Dann and Dennis Etchison was the one I chose and I'll be honest... it was because of this wonderful cover!

The first story I chose was Finishing School by Cherry Wilder. Magda Lucia y Flores Kalman is a member of a vampire family. But these are educated, modern vampires with a taste for books and films - civilised in other words. Magda is off to Finishing School for vampires and doesn't really see the point of it - for good reason.

The Raptures of the Deep by Rosaleen Love is a story about deep sea exploration. The narrator is a crytozoologist, he studies the animals of folklore and specialises in the creatures of the deep; when someone brings something up from the ocean that they don't recognise, he's called in. In the middle of a dive in a submersible they are hit by something and then find themselves the target of a kind of underwater meteor shower of burning rocks. Who's throwing them?

The Mistress of Marwood Hagg by Sara Douglass (Axis series, The Wayfarer Redemption, The Crucible etc.) is an historical supernatural yarn. A battle has just taken place and the victor, the Earl of Henley, murders the loser, the Earl of Chelmsford, on the battlefield in front of several of his men. Chelmsford's wife is deeply suspicious when Henley returns the body to her, as there are no battle scars, and puts a curse on Henley... and his future family.

Of these three the first was 'so-so', the second and third not bad. Truthfully, the conclusion I've reached is that I prefer older supernatural short stories to newer ones. This is purely a matter of taste - I just prefer the older style writing with more detail and depth, and probably the older settings. Women writing in the 19th. and early 20th. centuries were particularly good at this it seems to me.

There is no credulity more blind, no ignorance more childish, than that of the sage who tries to measure 'heaven and earth and the things under the earth', with the small two-foot rule of his own brain. Dare we presume to argue concerning any mystery of the universe, 'It is inexplicable, and therefore impossible?'
~~Dinah Mulock

I agree. Women have written some great ghost stories. I keep meaning to read Edith Wharton's ghost stories but never can find them.

ok.. what's the beginning photo of?? great shot whatever it is!

I like the cover to Victorian Ghost Stories and Gathering Bones!

btw: I got that used short story book but thought it was bigger in size I will try one or two stories though i will probably need a magnifying glass as the pages are getting dark on the book and I have difficulty reading mass paperback sized books.

I'm pretty sure the Gutenberg site has some of Edith Wharton's short stories, Chris.

I just checked and it does. The Triumph of Night is here:

Hey Pat! I forgot to give the photo a caption. It's the ruins of Rougement Castle in the centre of Exeter. They've built a park around and it and it's quite nice.

Yeah, those covers are nice.

Hope you can find a few good stories in the anthology. I sent you a few recs didn't I... in a blog comment?

yes you did Cath.. between the print and the bad quality of the paper they use for mass paperbacks I have a hard time reading from them... when i book is only mass paperback is when I wish I had the amazon reader to download to so I could make the print bigger!!

Wow, it's so spooky around here ... LOL. You've been reading some interesting stuff - I'm definitely going to check out the Shirley Jackson book.

Oh! I left you an award on my blog - http://blogginboutbooks.blogspot.com

Pat, it's so frustrating when publishers make the print in a book too small. I usually manage okay but even I'm starting to find one or two books unreadable now.

Susan, Carls' RIP challenge tends to inspire me to search out different and interesting books.

Thank you again for my blog award.